The following are battle reports from the rebellion.   These were fought via email between mike and ray. With mike commanding the defenders and ray commanding the rebellion.    I would like to thank both of them for taking the time and effort to fight these battles.   Mike was also kind enough to provide graphic enhancement of the units for the battles.   The rules used for these battles were a modified version of “strategos”, which are available from the society of ancients  http://www.soa.org.uk/   for about $12.   Strategos can be fought face to face with miniatures or over the Internet via email.

THE REBELLION IN AQUILA.  THE FIRST IMAGE IS THE INITIAL DEPLOYMENT OF BOTH ARMIES. THE NEXT IS THE POSITIONS AFTER FIVE TURNS.  RAY’S UNITS ARE BLUE/GREEN AND MIKE’S ARE RED/BROWN.  THE MAGES LOBBED SPELLS AT EACH OTHER FOR SEVERAL TURNS WITH LITTLE EFFECT.   TWO OF RAYS MAGES DESTROYED THEMSELVES WHILE TAKING OUT MIKE’S SCYTHED CHARIOT UNIT. RAY DECIDED TO LAUNCH AN ATTACK AGAINST MIKE ON TURN 7.  THE NEXT THREE IMAGES SHOW RAY’S TURN, MIKE’S TURN, AND THE FINAL POSITIONS OF UNITS AFTER RESOLVING MIKES ATTACKS. THE FINAL IMAGE SHOWS THE POSITIONS OF UNITS AS OF TURN 8.  POSITIONS ON TURN NINE WERE PRETTY MUCH THE SAME WHEN THE MORALE OF RAY’S ARMY COLLAPSED.  Ray‘s army consisted of levy light infantry, average heavy infantry, and average archers.  Mike’s army had veteran legionnaires, average and veteran light and heavy cavalry.  The units identified as UC were mages, AL were heroes, and AC were army commanders. 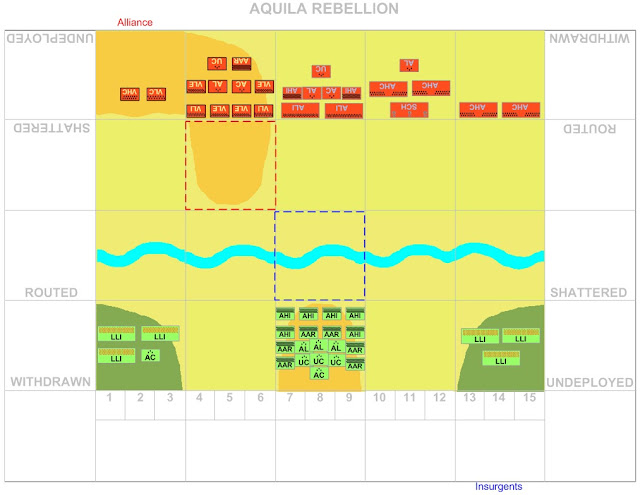 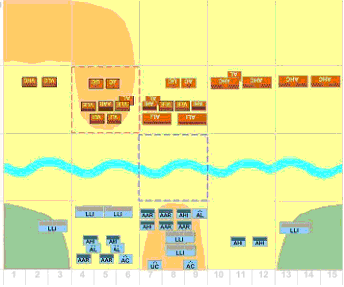 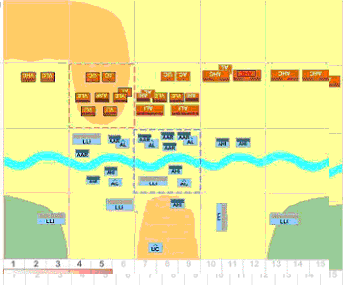 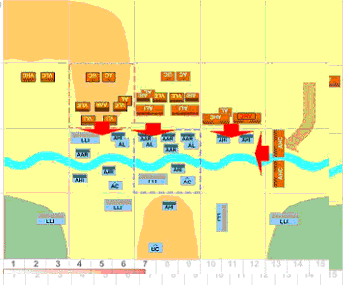 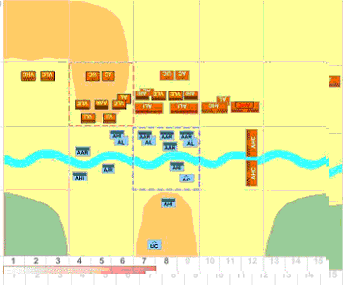 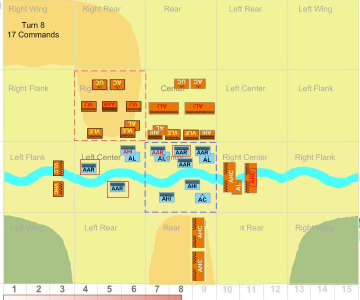 Posted by William Butler at 7:32 PM