Several years ago I ran an Ancients campaign with a touch of fantasy added.   This was for a local club in the Central Valley.   There were six players/teams for the campaign.   These represented different factions vying for control of the various countries of the region.   Each country had a number of cards ranging from 6 to 12.   The cards had different symbols or combinations of symbols representing political power (needed to control a country), armies, navies, fortifications, and/or sources of money.   The deck of cards also included mercenaries, great generals, events and special items.   The teams were dealt a set of cards too start with and had some money (talents) also.   They could obtain additional cards from the deck and/ or discard pile (if still available).

The players took a turn in sequence with each round of player turns being one campaign year.  During their turn the players could meld cards to control a country,  stage a political coup against another players country if they felt they had enough political power to overthrow the current government, invade a single country belonging to another player, or do nothing.  Each country they controlled provided them with additional income.   If drawn from the deck, event cards were played immediately and a replacement card was drawn from the deck. 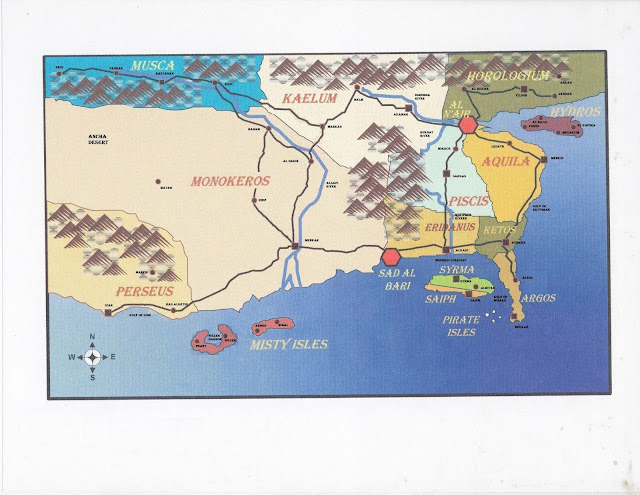 I also had a more detailed map showing all the minor towns and additional terrain details on a 2 foot by 3 foot hex sheet.  The following is a section of the more detailed map that was not available to the participants showing the area near Akamar.  Akamar is the capital city of Kaelum.﻿  This map had been used in another ancients campaign that I had run several years before and had been modified to include larger hexes composed of the smaller ones. 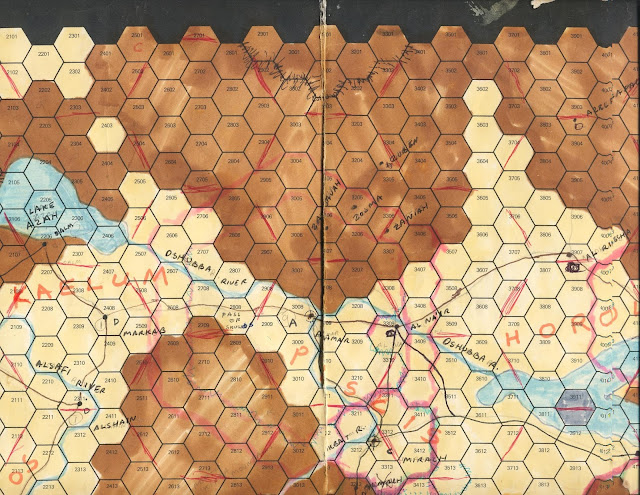 The campaign took about 11 months to complete and covered five full campaign years and ended on the second player turn of the sixth year when a special event card ending the campaign was drawn.  During the campaign fortunes ebbed and flowed.   A player/team could go from being the most powerful to the weakest and then regain a stronger position.   In some ways it was like the current television series "Game of Thrones".
There was also a newsletter, The Akamar Herald,  covering news of the campaign, contributions from the players, and background information for the different countries.   I will be posting as many of the campaign newsletters that I still have.   Unfortunately I had a computer disk failure sometime after the campaign ended with the loss of all the newsletters and maps.  Fortunately Ray, one of the participants, had kept copies of most of them.   There are about a half a dozen that are missing.   Those missing are mainly from years three and four.  One of them contained an entertaining story written by the participants of the battle between the Wizard and the Sorcerer Silidon for control of the Misty Isles.  Based on following issues most of them were periods if calm with some event cards and background information on the countries of the campaign.
As the campaign unfolded, some of the campaign characters tales developed a life of their own.  Brown Dort of Perseus was overthrown, went into hiding, and returned to power.   The Sorcerer Silidon developed a reputation for evil deeds.  Several major battles were fought, some in person, and a couple by email.   One of the teams was on the opposite coast of the country as one of our club members had moved there prior to the campaign starting.
Posted by William Butler at 9:07 AM