There were four games at the club meeting today.   Form on the Admiral's wake (age of sale0 rung by Bob,  American War of Independence in 54mm run by nick,  WW2 air run by Chuck, and a fictional modern armor game run by me.

The rules used were Lightning War - Red Storm, which are available for free from  LWRS group.io   We did use some house rules for the game as we kept the ground scale to one kilometer per 10cm (four inches) instead of the recommended doubling for the modern period and  changed the quality ratings by increasing them by 5 and using a roll of two dice instead of a single die roll for activating formations.  The table was 24km square. 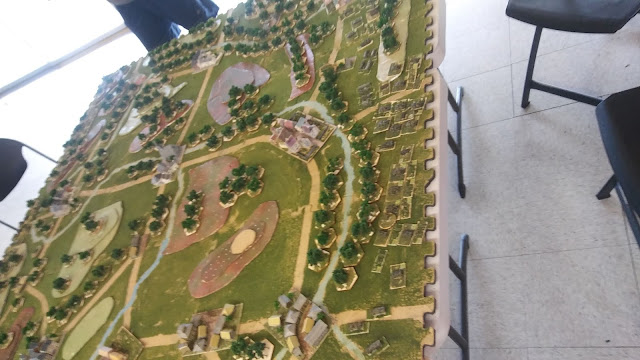 View of the battlefield from the northwest

At the start of each turn two six side dice were rolled for each brigade and any modifiers are added.   For this scenario there were none.   Both sides were rated as good with a rating of 8 for all units except the RDPC artillery brigade. which was fair with a rating of 7  The die roll is used to determine the order of activation for each combat formation (brigades for this game). The score for each of the formations on both sides determines the order of movement for the turn.   The highest score can move first or choose to move later in the turn.  This gives the higher scores an advantage over lower scores as they can choose to move when it is to their best advantage.  The next higher score now has a choice of moving or deferring their move to later also.   The same applies to each formation in turn and can force the formation with the lowest score to move first.  This process is repeated until all formations have moved.

Indirect fire is then resolved followed by  direct fire.   It is possible for artillery fire to disorganize a formation which would then cause it to only fire with half its combat factors.   Artillery fire is not guaranteed as the unit calling the fire has to roll equal to or less than the artillery formations quality rating and calling divisional artillery has an additional negative modifier applied to its rating.  Artillery fire is very good at disorganizing units, but causing casualties on armored units is difficult due to the save modifiers.   Infantry in built up areas can also be very difficult to cause casualties on.

The UFBV used march and road movement to move quickly forward and gain a positional advantage over the RDPC.   At first casualties were very light.   The RDPC was advancing from the east and managed to occupy the town on the south center edge of the battle field.   The UFCV advanced towards that town and prepared to storm it with a pair of infantry battalions.  Artillery and direct fire had disorganized the DRPC defenders. If the UFBC could roll high enough for initiative on the next turn the two battalions would be able to move first and assault the defenders before they were able to recover from disorganization.  They were able to do so and their assault drove the defenders from the town. 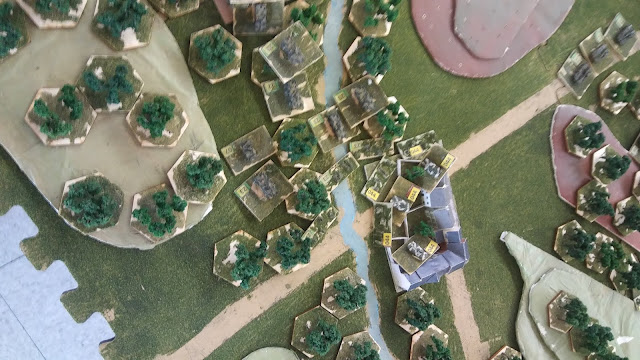 View of the town on the turn prior to the assault on it. 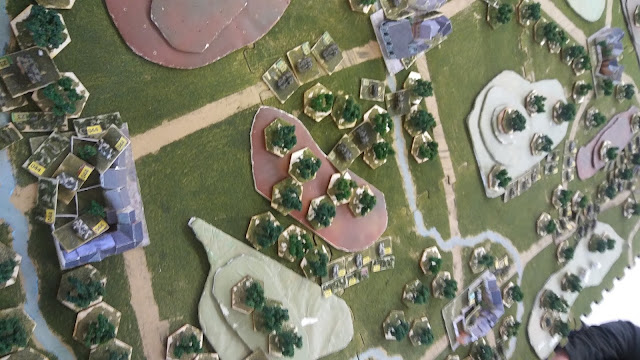 Center of the battlefield on the same turn viewed from the southeast
Attacks by the RDPC to the south of that town were halted and driven back  In the center part of the table UFBV artillery and direct fire badly damaged another couple of RDPC battalions.

On the northern flank neither side was making much progress.   Artillery and direct fire from a Leopard 2 tank battalion damaged another BTR battalion.

Combat had taken a full rules day of six turns.  Both sides paused for the night and combat resumed in the early morning of the next day.  At this point UFBV artillery and direct fire took a toll on RDPC units. By the end of turn eight the two RDPC brigades on the southern half of the table had two exhausted battalions with possibly more by the end of the next turn.  It was judged a UFBV victory. We had played for about four hours with a short lunch break included. 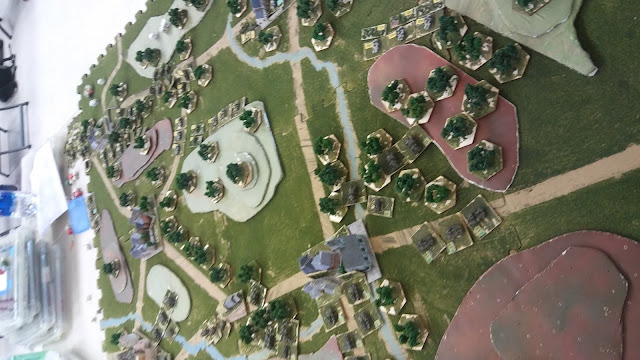 We have tried several different rule sets including Fistful of Tows, Spearhead, Cold War//Blitzkrieg Commander and others.   These played the fastest of all of them and were easy to comprehend and use.  The rules are available for free from https://groups.io/g/LWRS

Posted by William Butler at 7:40 AM No comments: