This past Sunday we played a game of Fistful of Lead Bigger Battles at the club.   This was our first game with the rules and we made a few mistakes, though nothing major.   The game was set in the sixth century A.D. with Byzantines vs Sassanid Persians.    The Byzantines had six cavalry units and nine infantry units.  The cavalry was bow and javelin armed while the infantry had some units of mixed archers and spear, a couple of units of heavy archers and three units of heavy spear.   All were regulars.

The Sassanids had two cataphract units, three units of light bow and spear armed cavalry, three units of spear armed infantry, two units of mixed spear and bow infantry, and five archer units.   The cataphracts were regulars, the light cavalry and mixed spear/bow were tribal, and the rest irregulars.  Unfortunately, I forgot to bring the elephants so the Sassanids were missing one of their better troop types.

During the course of the game the Byzantines had better die throws and broke or eliminated over half the Persian units.   The Persians were only able to eliminate two of the Byzantine infantry units.   One of them disappeared in spectacular fashion when it engaged a Persian unit and both side eliminated the other with their close combat die rolls.

All units on both sides were eight figures strong.  I only took one decent picture during the game.   It is posted below with the Byzantines at the top and the Sassanids at the bottom. 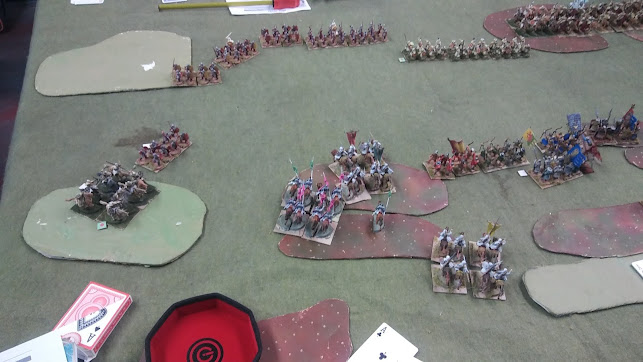