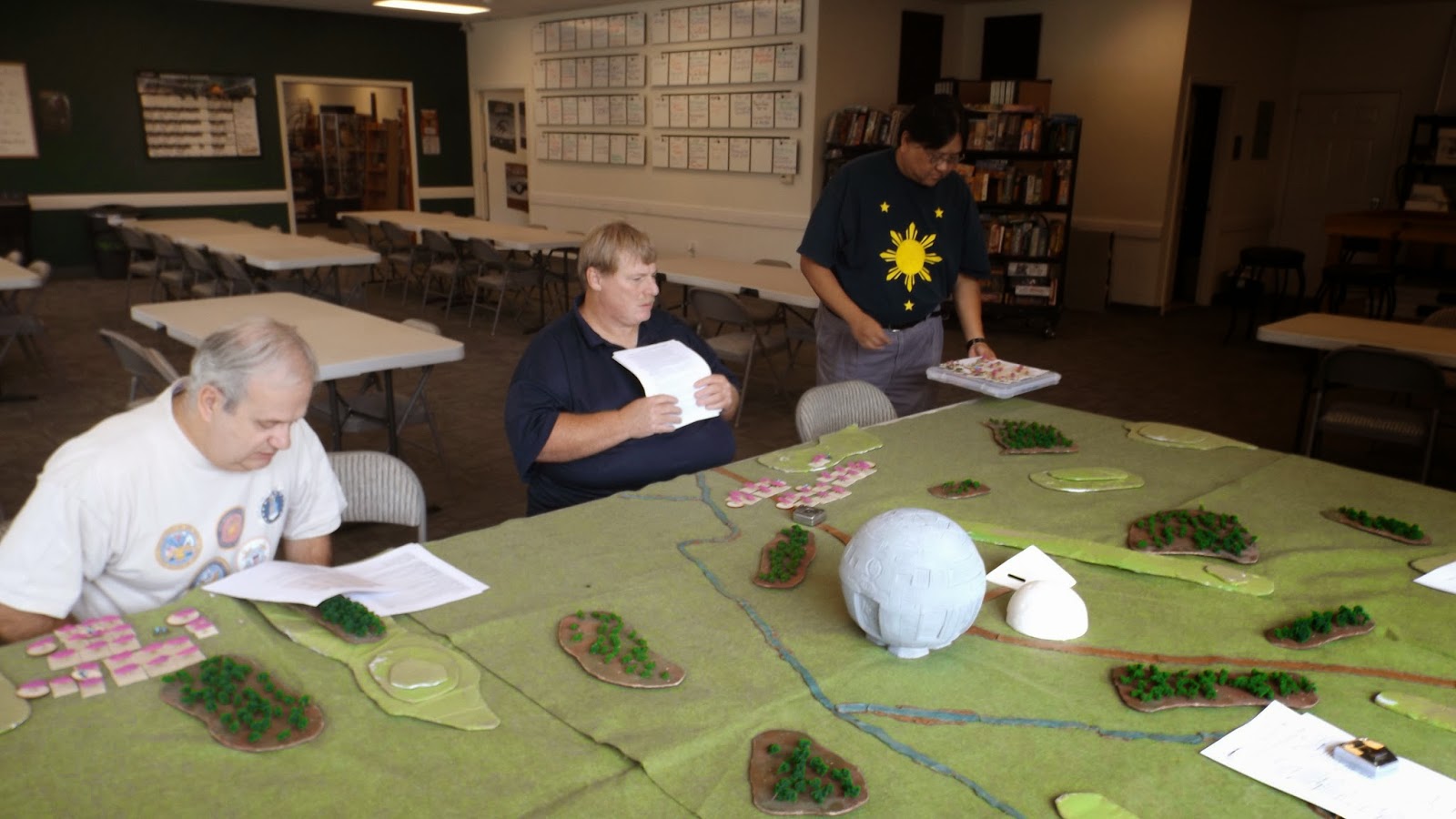 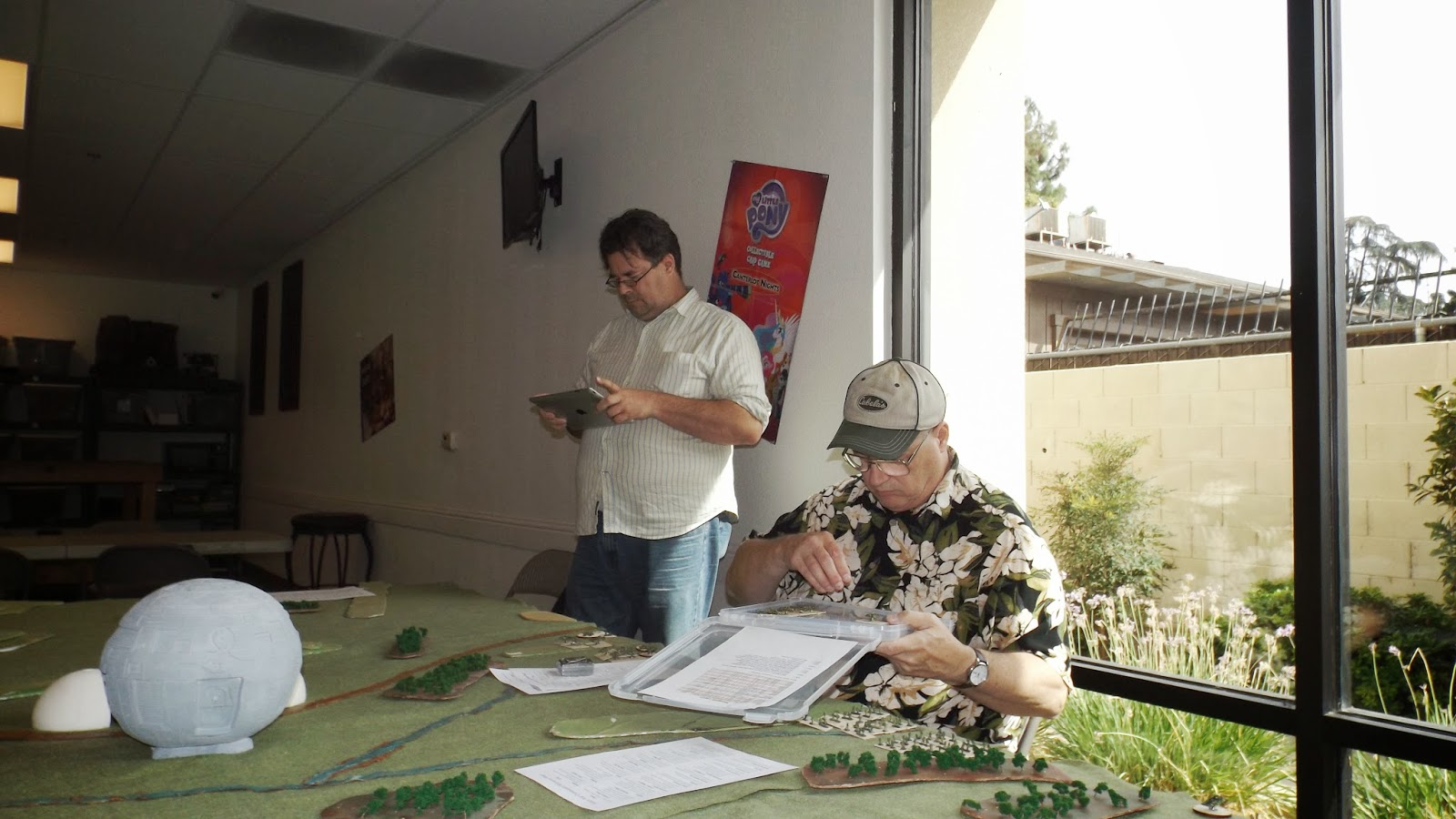 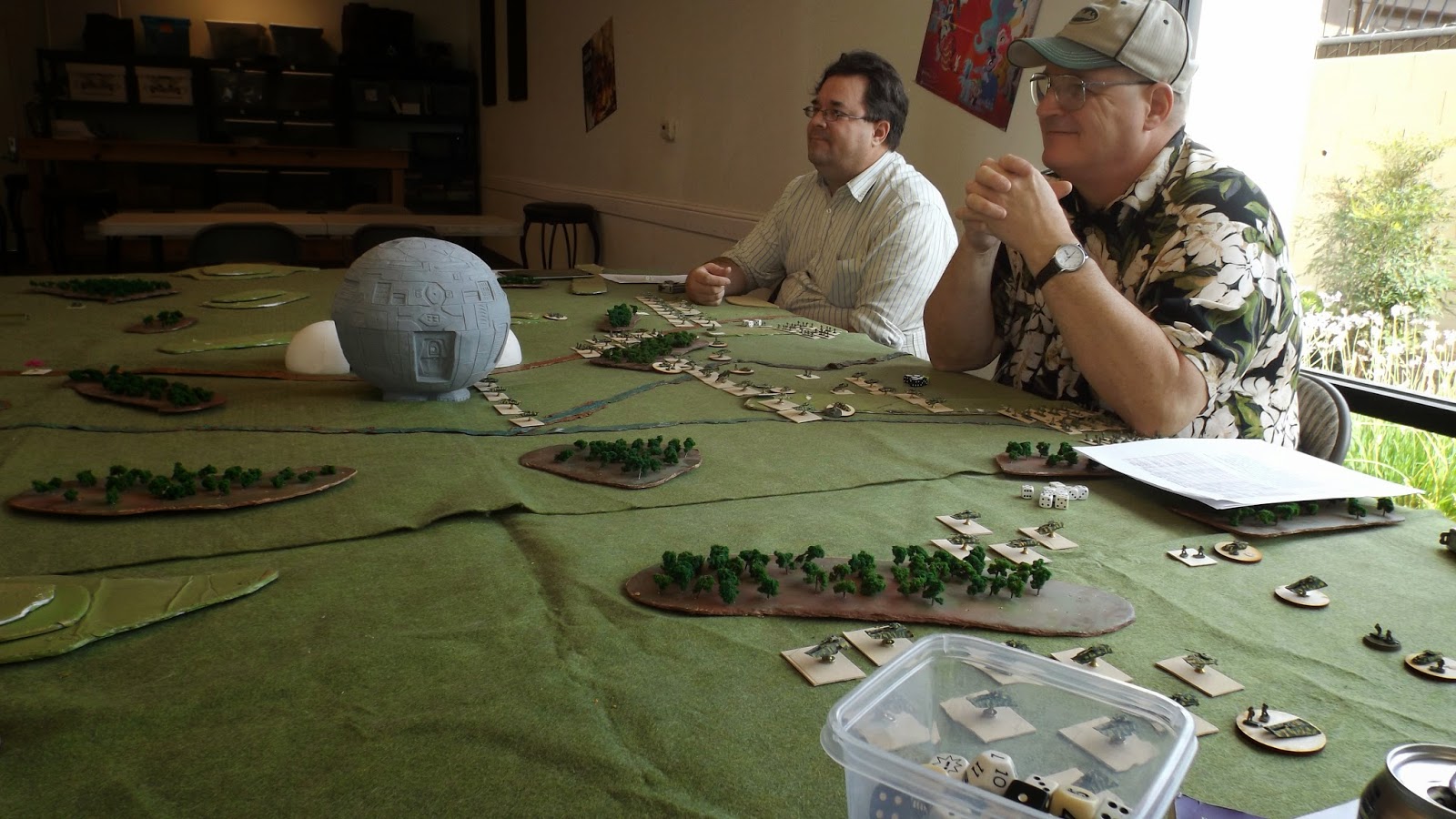 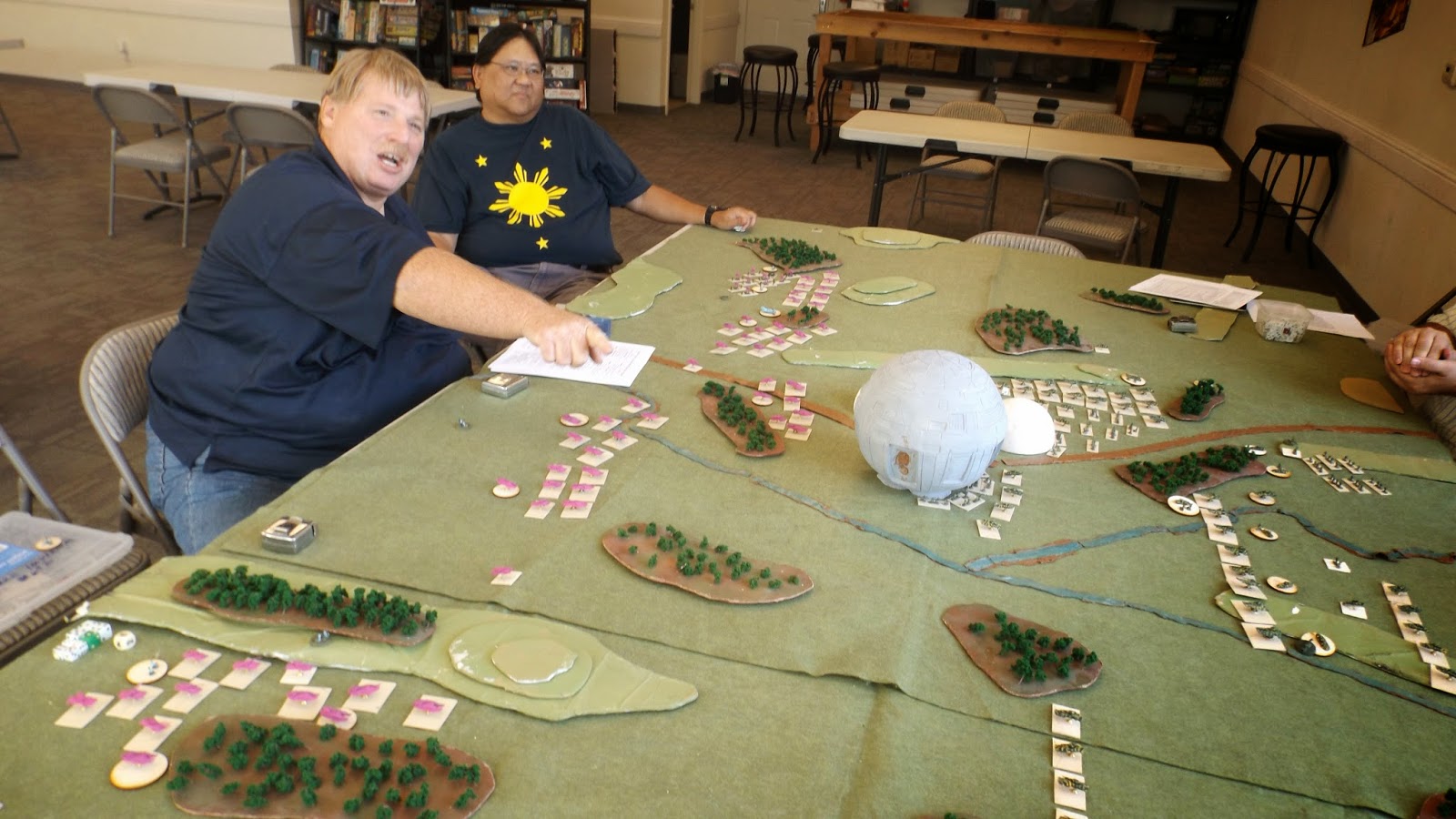 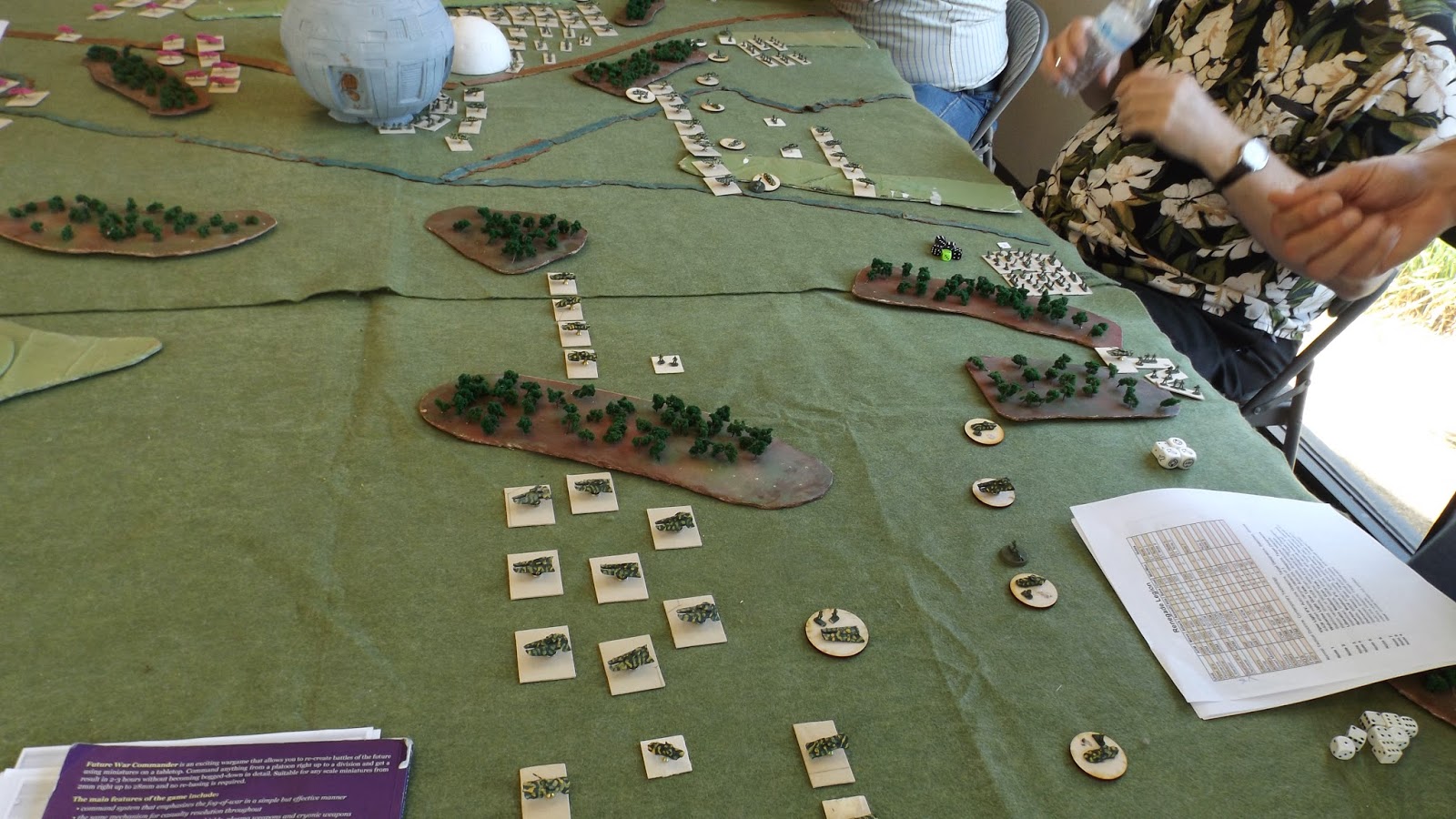 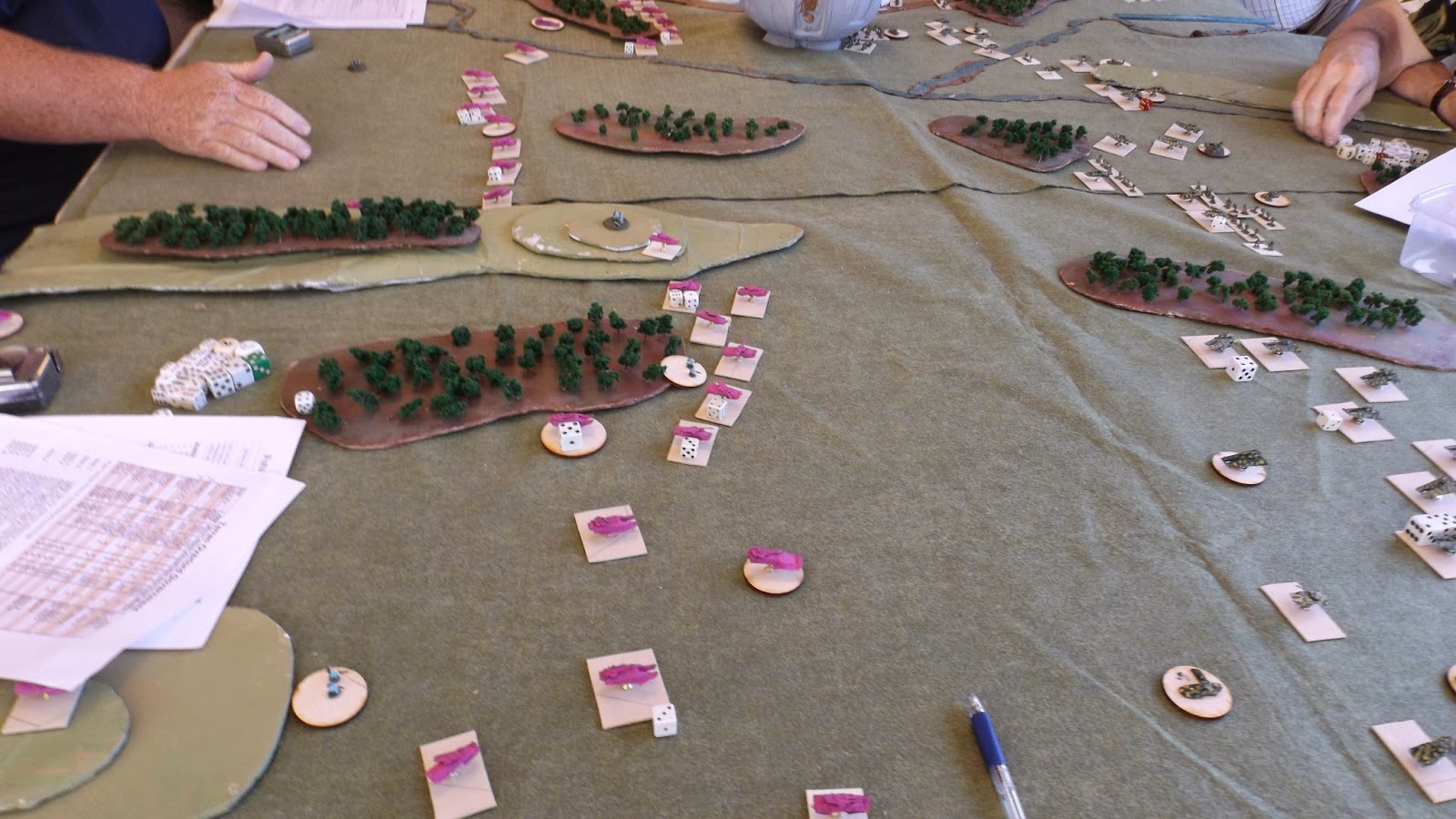 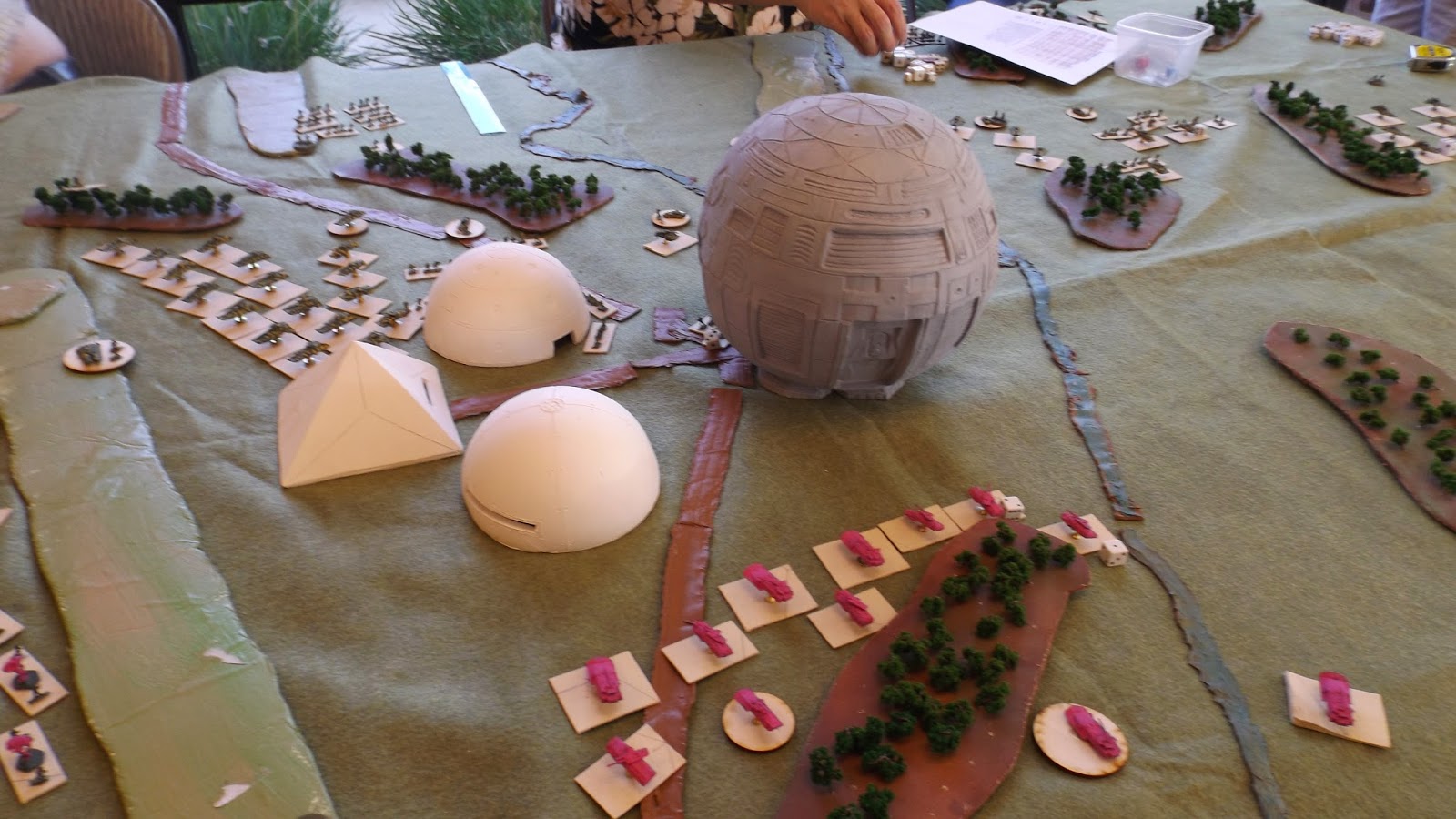 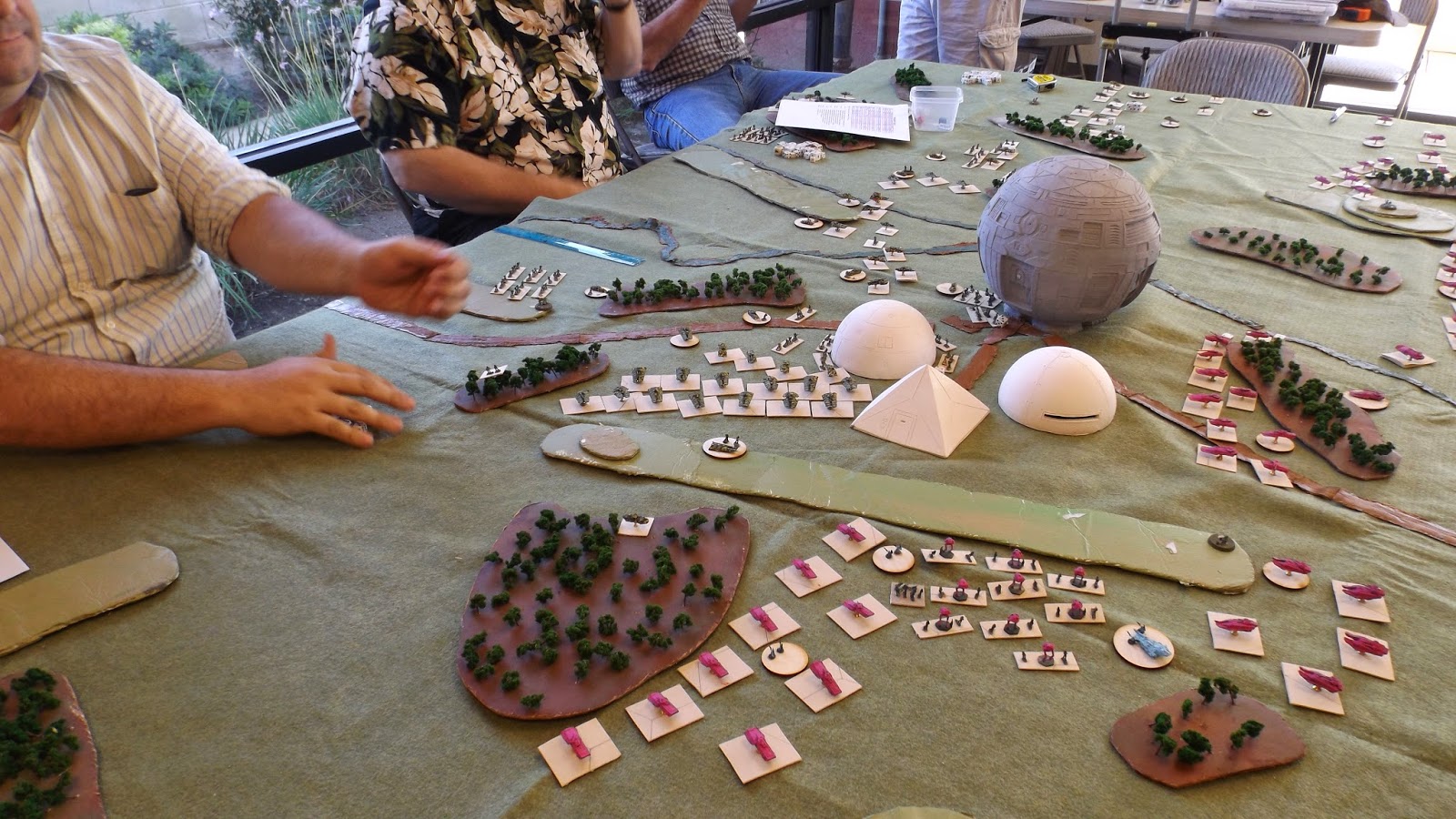 Neal attempts to outflank Mike's command.  Shortly after this Ron was able to open the ship and an Ogrethulu came out of it.  The first force it attacked was Brent's.   Meanwhile Ron's infantry boarded the spaceship while the Ogrethulu was facing away.  The Ogrethulu then turned on Mike's command after the lead elements of Brent's force were suppressed by a Federation artillery bombardment.   Throughout the game the Federation artillery was more effective than the Imperium's.  The game was called about 4:30.  Ron had secured the spaceship, but his command had been broken.   The Federation had achieved a Pyrrhic victory by capturing the ship and suppressing the Ogrethulu.
Posted by William Butler at 9:43 AM No comments:

We will begin our advance in the early hours of the morning.  Unless things change, we will be engaging the Panthari forces tomorrow.
Posted by William Butler at 6:43 AM No comments:

Encounter at Crazy Rodent - Journey to the Planet

All elements of our division have been briefed on our plans for capturing the spaceship and facilities on the planet Crazy Rodent in the Fresnel star system.   Approximately three weeks ago a survey ship from one of the planets of Unaligned Worlds Region had discovered an unknown type of spaceship and buildings on the second planet of the Fresnel star system.   They had given the planet a name used in their language for a small, furry, tree dwelling, nut gatherer, with large incisors and an erratic behavior.  The nearest translation of the name is Crazy Rodent.

Upon learning of the discovery Federation High Command ordered our division to embark on our transports, head for the Fresnel system, and secure the site.  It is believed that the Panthari Imperium has also dispatched a military force to secure the site for the Imperium.

The briefing also included the survey report and video conducted by the independents.  While surveying the planet they had spotted an anomaly on one of the land masses.  Closer observation revealed a spaceship of unknown design and three buildings.  Two of the buildings were spherical and the center one was a pyramid.   A remotely piloted drone was launched to take a closer look at the site.  While the ship and structures appeared to be in excellent condition, the site also seemed to be quite old.  As the drone moved closer to the structures and ship, the transmissions from it started to degrade.  The crew of the survey ship was able to move the drone away and was able to determine that staying about 10 kilometers away from the ship and structures did not result in any degradation of the transmissions from the drone.   The survey crew elected to not attempt to land and inspect the site and after recovering the drone, immediately left the system to report their find.

Crazy Rodent is a Terrestrial world with no signs of intelligent inhabitants.  The site is located in a hilly and wooded area with a stream passing next to the ship.   There are the remains of some roads at the site that lead to a pair of excavated areas.   The roads are badly decayed and the excavations are overgrown with vegetation.   The excavation sites appear to have been quarries.

Our plan calls for the my battalion and the rest of the brigade under the command of General R. Lange to advance in the middle between the other two brigades and secure the site.   The other brigades are to secure the area around the site.
Posted by William Butler at 8:19 PM No comments: