Today I ran Asculum at Kublacon.   This was the first time that I had attended Kublacon.   The venue was excellent, the staff well organized, and the food was reasonably priced and good.   However, the parking was terrible.   The only way you could park at the hotel was by booking a room there.  Otherwise, there was parking across the street or, if you were lucky, finding a space on a public street.  Since the prices the hotel was charging for parking at the hotel or across the street were ridiculous, I looked for free parking on a public street.  Fortunately, I was able to find a place to park about two blocks from the hotel.   I loaded everything on the hand cart and made the walk to the venue.  9 boxes of figures, two green game mats, and a large box with dice, tape measures and rules.   I am glad I was using 6mm figures instead of 28mm.  The convention really needs to find a place with enough parking for all the attendees.

There were at least a dozen or more historical miniature games going at all times, not including the Flames of War tournament,  The dealer room had a good selection of board, role playing and fantasy games, but little historical.   I didn't see the fantasy miniature area, but did see a lot of board games in the adjoining areas and I understand that the ninth floor of the hotel was set aside for role playing games.

There were six players for the game which started at 10 and ended at 1:30.   The Roman players gathered for a conference to decide their plan of action for the battle.   They decided to attack the Greek left flank where the Latin allies were and hold back their center and left.   Action was joined when the Roman right flank cavalry was engaged by the opposing cavalry.  Their opponents gained the upper hand and eventually routed the Roman cavalry.   Surprisingly, the Roman cavalry commander was able to rally one of the two routing units when there was only a one in ten chance of doing so.

While this was happening the Latin infantry charged into the Romans and were able to contact most of the Hastatii with two units against one.   Though the Romans had a higher combat factor any hits that they caused had to be split between the two opposing units.   As Hastatii units became shaken they were replaced with Princepes.    At one point four cohorts of Latins routed, leaving a hole in the Latin line.    They did have enough cohorts in reserve to plug the gap,  but not enough to cover any further routs.

Pyrrhus had sent half of the elephants to each flank and seeing that the Latins were taking a beating ordered the phalanx units to engage the rest of the Roman infantry.   He then led his guard cavalry towards the Latin flank to help cover any further gaps in the line.  On the other flank the cavalry were trading blows with little result.   The phalanx units were starting to wear down some of their opponents, but the Romans still had two lines of infantry in reserve.

It is quite likely that the Roman plan would have succeeded if they had not decided to rally some of the shaken Hastatii.   A series of bad die rolls caused many of the units behind the front to rout leaving the Romans without enough reserves to replace the front rank.   One option that was brought up during the discussion after the game was possibly having the Princepes move forward between the Hastatii units in order to inflict more casualties on the Latins wearing them down faster.  Not attempting to rally the shaken units might also have given the Romans victory as the Latins were becoming exhausted and the Romans would have had enough fresh units to finally break them.  Two turns later the right end of the Roman battle line collapsed leaving the flank of the center exposed.  At this point the Romans resigned giving their opponents the victory.   The Greeks and Latins had 2000 troops routed and about another hundred casualties.   The Romans had about 8,000 to 10,000 troops routed giving Pyrrhus a better than historical victory.
Posted by William Butler at 8:41 PM No comments:

After a few weeks off from painting I finished the phalangites for Raphia plus a few extra for spares.   Raphia will be run at conventions later this year using Scutarii.  The following pictures are of all the phalangites for both sides in a formation 16 figures deep by 256 wide.   This formation of 4096 men was known as a phalangarchia.  All the figures are from Rapier miniatures.   The back ranks are the phalangites with the vertical pikes and are a mix of Mac002 and Sel002.  The others are a mix of Mac001 and Sel001 with pikes at a 45 degree angle. 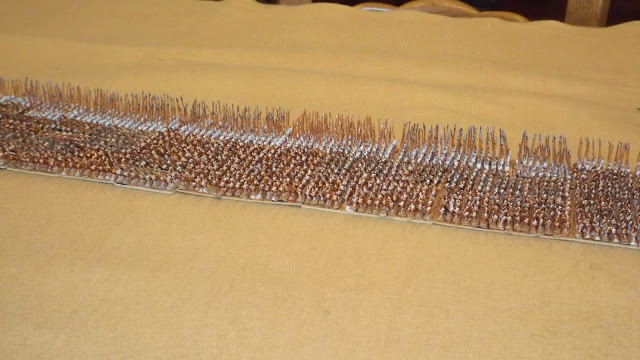 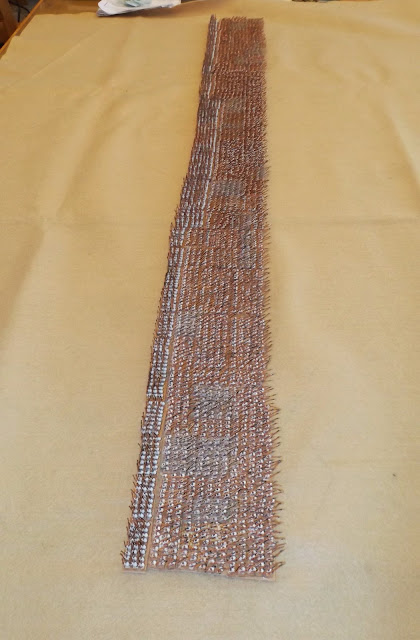 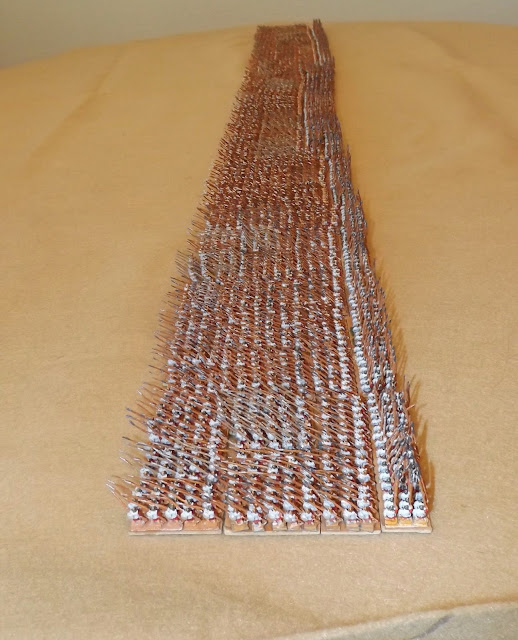