an introduction to Jagdpanzer 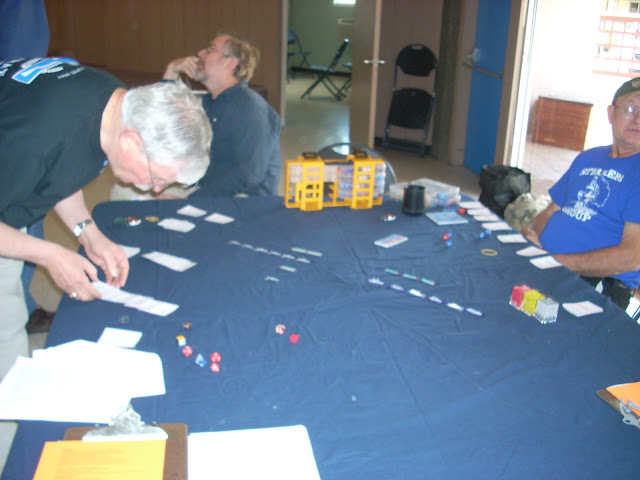 one of the naval games 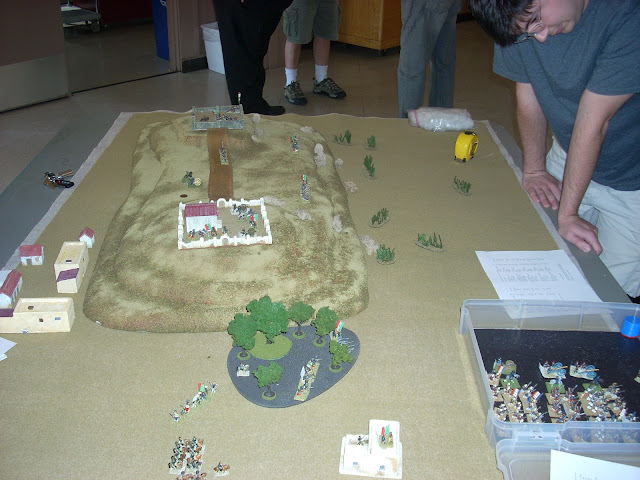 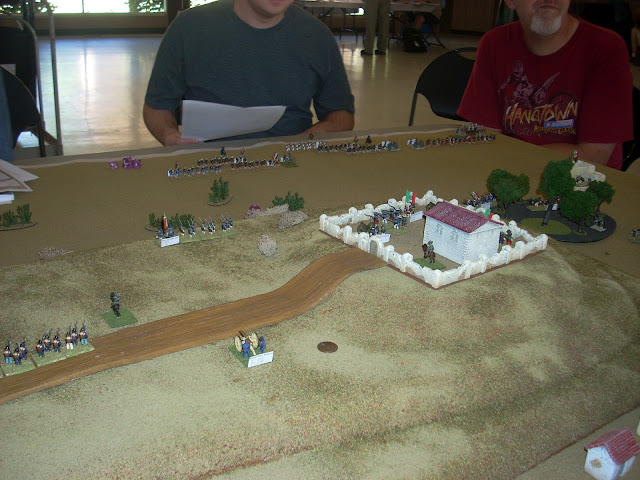 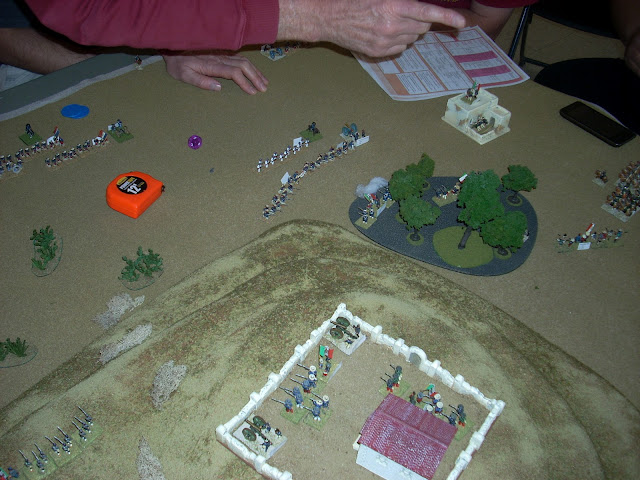 James Poli was running the Jagdpanzer game.  The forces involved were the Romanian guards and the Russians.   The Russians had 3 t28s 10 t26s four infantry platoons, a machine gun platoon, some anti-tank guns, some mortars, and  4 armored cars.   The Romanians had a similar sized force of infantry and tanks.   I commanded the Russians and James commanded the Romanians.  My objective was to secure the bridges across the river.  My forces started about the middle of the table.   After accessing the situation, I decided to set up a kill zone along the main road, secure the church on the hill with a couple of platoons of infantry, and use the rest of my force to sweep the right flank.

I set up the T28s on the road, moved three of the T26s up on the hill above the road, and placed the anti-tank guns supported by a platoon of infantry in the woods on the left side of the road.  As the Romanians advanced up the road my troops opened fire taking out a couple of their tanks.  Over the next few turns my forces along the road took out more of the Romanian tanks and forced them to withdraw.  I ended up losing one of the T28s.

On the hill my infantry secured the church and the woods, but came under bombardment from artillery.  Fortunately none of my forces were lost.  The Romanians had sent three tanks and a couple of platoons of infantry to capture the church and hill.  James had also placed his anti-tank guns in the field on the back side of the hill.  It had taken a few turns for the Romanians to get in position to assault the church.  Their tanks had been firing on my infantry in an attempt to kill or pin them.  At this point my artillery came down on the Romanian forces on the hill, landing with no deviation, and causing devastation to the Romanians.  One tank was lost along with four infantry.  The machine gun platoon also managed to kill another couple of stands of Romanian infantry.  The Romanians failed their morale and retreated.

On my right flank the remaining seven T26s and two platoons of infantry had advanced on the small village, which was held by a platoon of Romanian infantry.  The combined fire from the tanks and barrages by my mortars and light artillery killed one infantry stand and pinned the remainder.   James was sending his remaining armor to help on that flank.

At this point we had to call the game due to time restraints.  Due to unforeseen circumstance the game had started over two hours late.  The Russians were in position to capture the bridge on the main road, had control of the central hill, and had more forces available on their right flank than the Romanians had available to counter them.  Total Russian losses were one T28 and a couple of stands of infantry.  Romanian losses were seven stands of infantry and seven tanks.

I had been lucky with my artillery die rolls, getting most of it to land on target.   A post game analysis of the scenario indicated that the Russians should probably start the scenario arriving on the roads instead of starting at the middle of the table.  By starting near the middle, I had been able to gain a tactical advantage with the Russians.  The Russian armored cars were very slow, not being able to keep up with the infantry when moving cross country. 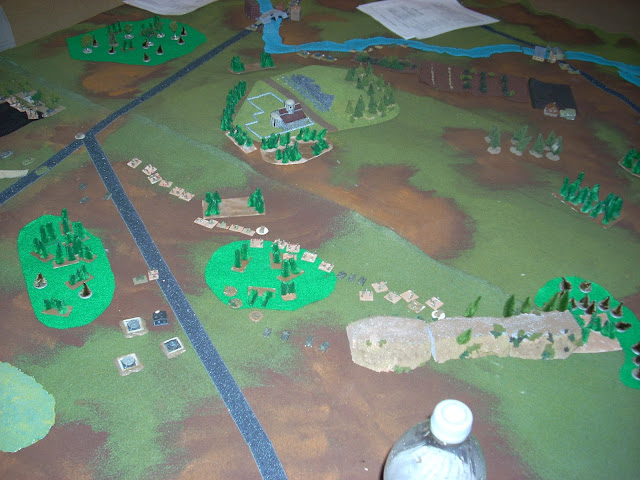 Initial starting positions of the Russians 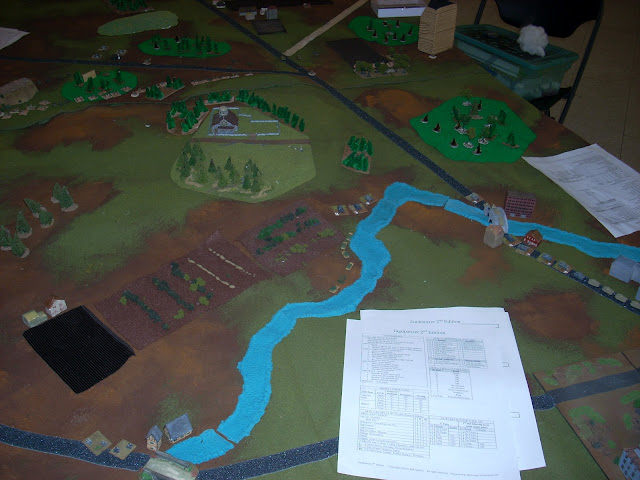 view from the Romanian side of the table 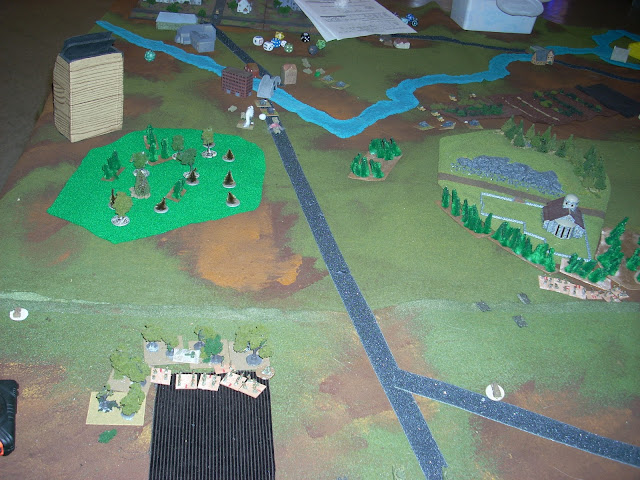 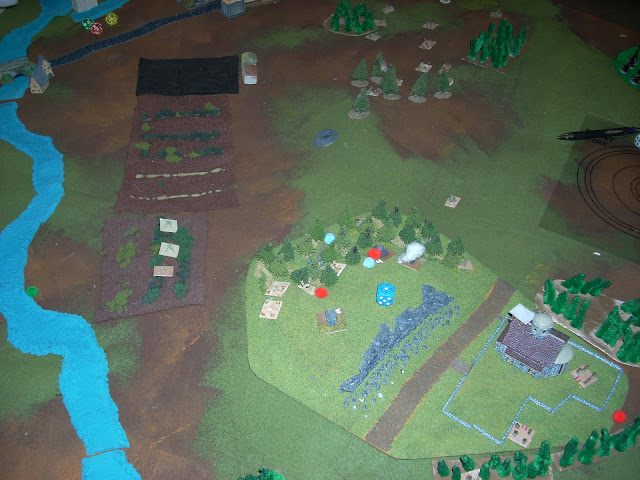 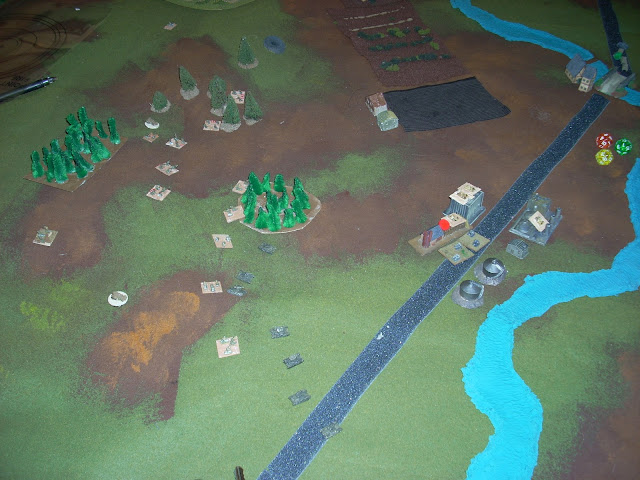 The advance on the Russian right against the village. 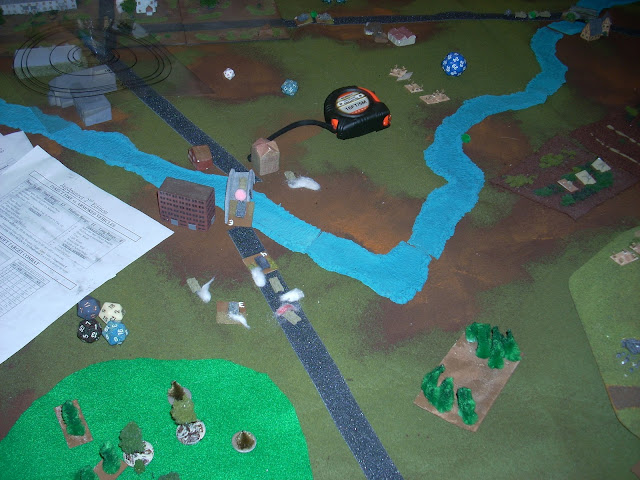 Remains of Romanian tanks caught in the kill zone. 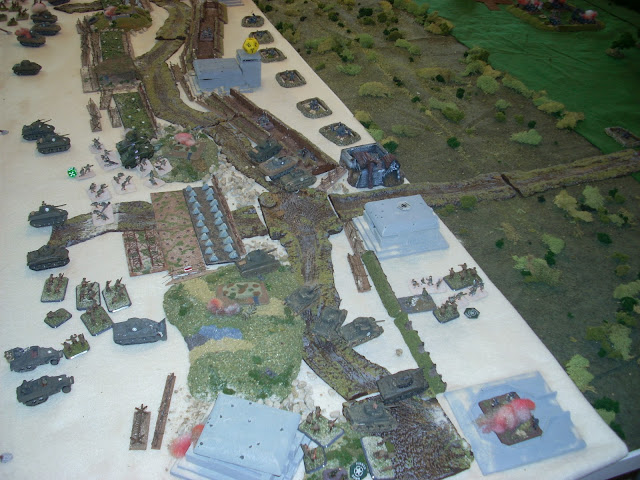 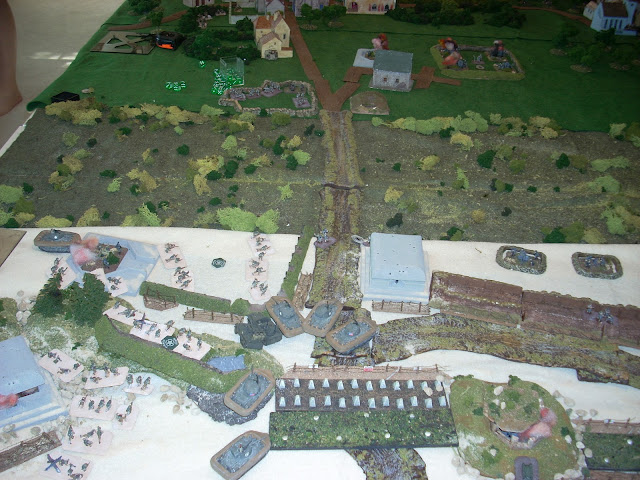 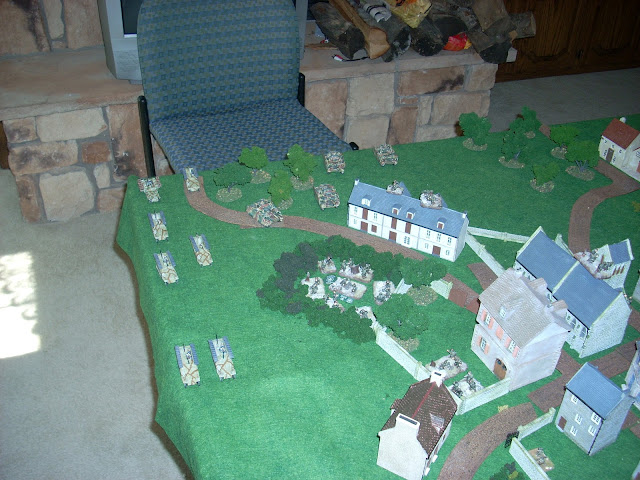 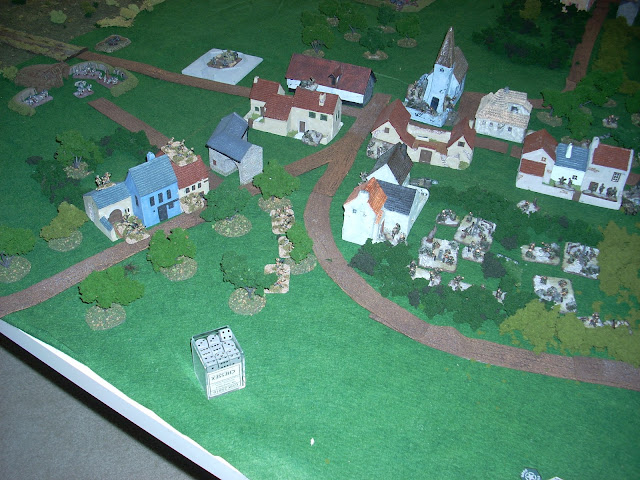 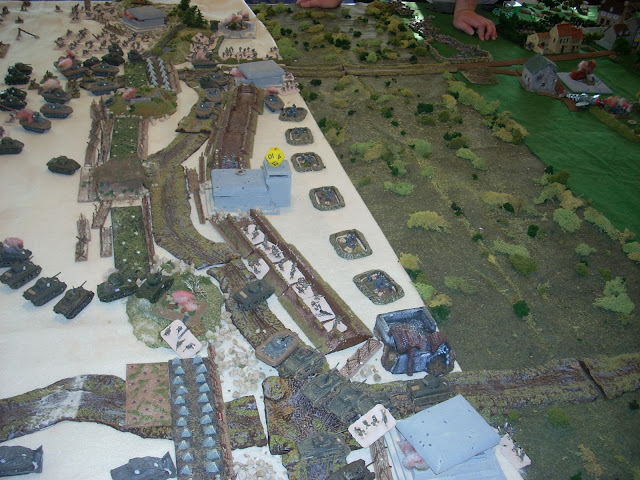 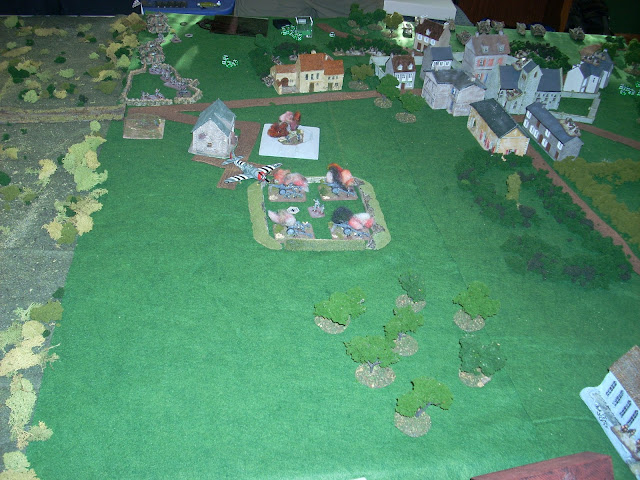 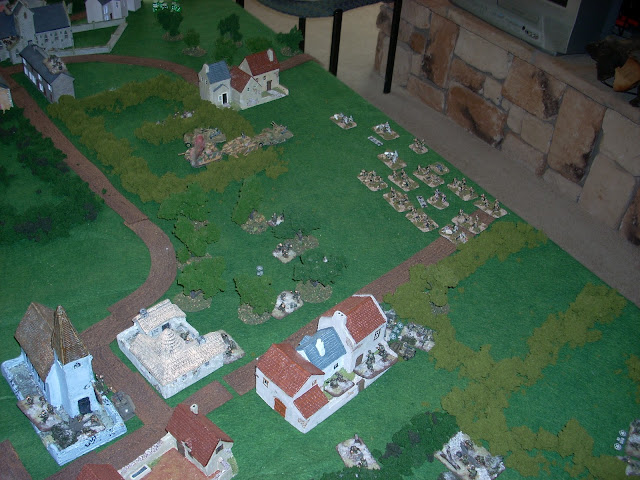 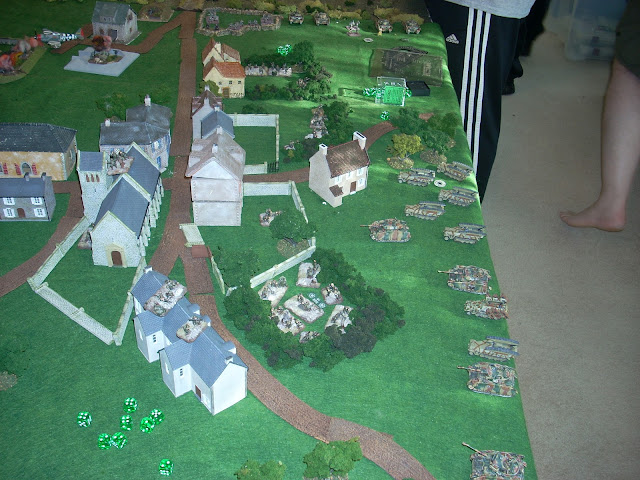 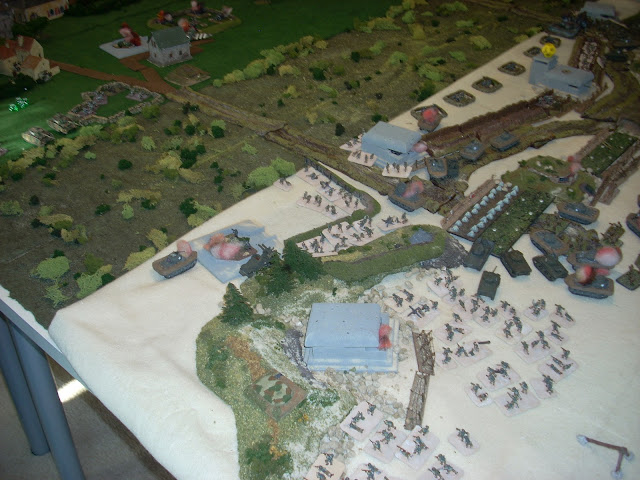 Dan cleans out eastern beach defenses and takes up position to counter German panzers.
Posted by William Butler at 8:38 AM No comments: