My friend, Steve, who is a high school teacher, asked me to put on a game for the schools wargame club. I chose the Battle of Hydaspes as it involves most of the different Lost Battles troop types. Steve took the part of Porus, while three of the club members took the parts of Alexander, Coenus, and an unnamed Indian subordinate.

The figures for the Indian army are a mix of Baccus and H&R infantry, Irregular and H&R cavalry, H&R chariots, and elephants from H&R, Baccus, and Irregular. 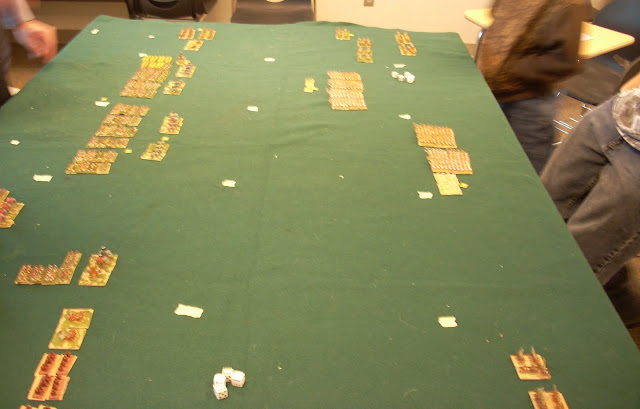 first turn
The Indians moved their units in the rear and wing zones to form a solid battle line ending their first turn. The Macedonians advanced their units to their forward zones and elected to use all their extra command points to provide a bonus to all their units attacking from their right center. However, they were only able to reduce one of the opposing elephant units to spent. 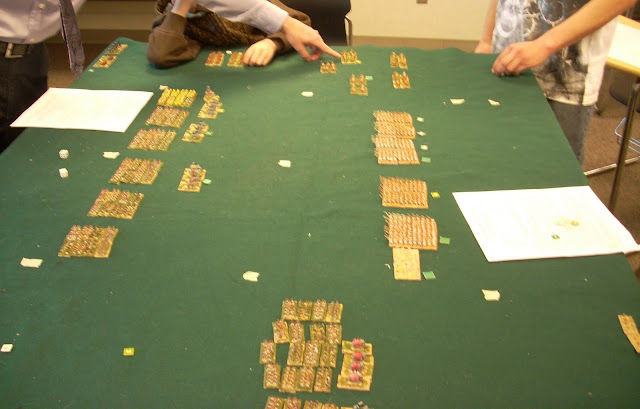 Second Turn
At the start of the second turn, the Macedonians decided to reverse the turn order and move first. Taking advantage of their command exemptions they attacked with their cavalry on both flanks and the infantry in their center zone, but were only able to reduce a few of the chariots and cavalry to spent. alexander had elected not to lead the charge on the right flank. The Indians then counter-attacked and the elephants battered the Macedonian light infantry. The Indians also advanced from their right center into the Macedonian left center, threatening the flank of the phalanx. 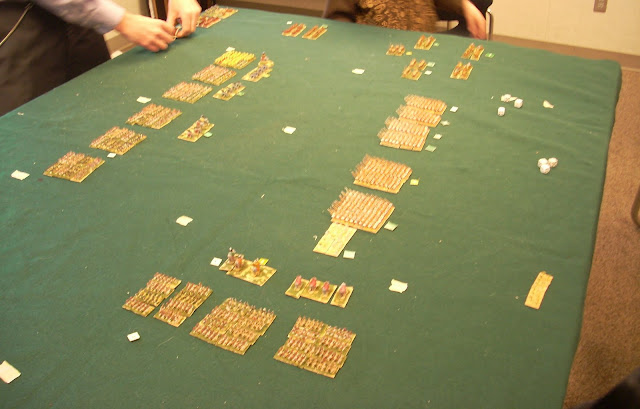 Third turn.
Alexander now boldly led the attacks for turn three. One Indian chariot unit was shattered and one Indian Elephant unit in the center was also shattered. The remaining Indian mounted forces also became spent. The Indians passed their morale tests and retaliated causing some damage to the Macedonians. All the phalanx units became spent and Alexanders bodyguards received two hits. Luck was with Alexander as he removed both hits. 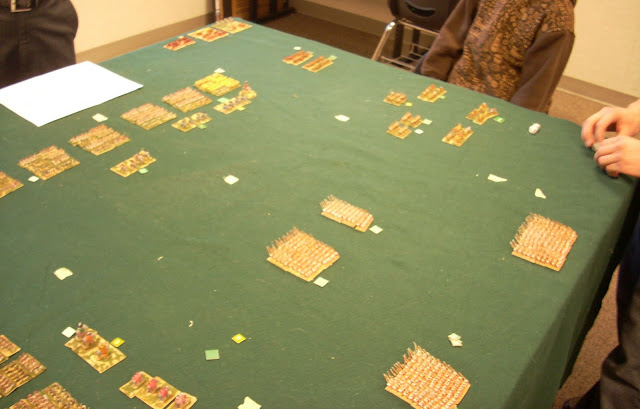 End of turn four.
Turn four was a disaster for the Macedonians. Although they shattered some more Indian units and Coenus drove off all the opposing forces and advanced into the Indian right flank zone, the Indian army remained steadfast. Their attacks were devastating. Alexander received another hit, but was able to remove it. The Macedonian Phalanx did not fair as well as three of the veteran units and one of the average units were shattered. Even with almost all their infantry gone the Macedonian morale held as they rolled another six. During the battle almost every die roll for morale tests was a five or better with a couple of fours. However, this was not to last. On turn five Alexander again led the attack. Scoring only a die roll equal to the number required, Alexander elected to make an all out attack shattering the opposing cavalry. This caused another morale test for the Indians. This time their die roll was only a one and with that all of their remaining units except those in the Macedonian left center zone fled from the field.

Due to time constraints the game was called at the end of turn five. The points for units spent, shattered, etc for both sides were almost equal, but the bonus for the initial points differential resulted in a clear victory for the Indians.
Posted by William Butler at 9:36 PM No comments: