I haven't  posted for the last couple of months.   During that time I have participated in a several games,  run a couple at the conquest Avalon convention and painted some additional items.

At Conquest Avalon I spent Saturday gaming, taking part in a French and Indian War game using Rank and File which ended in a draw,  a Ridiculous Vanity game where my king charged the opposing commander and due to an extremely unlucky set of die rolls ended up dying,  and a KISS Rommel game commanding the British at Toburk.    The British were overrun.  On Sunday I ran a Franco-Prussian War game using 1871 rules.   This was two Prussian line corps vs a French four division corps which was a draw.

I also ran a Franco-Prussian war game at the Miniature Wargaming Society of Sacramento using Bloody Big Battles this was Prussian victory.  Of the two rule sets 1871 played better, but was not that satisfying a game.   I will be trying Rank and File for a Franco-Prussian War game in 2020.

After trying KISS Rommel, I went looking for a better set of rules for large scale battles.  I found the turn sequence for KISS Rommel which had the moving side doing all the firing with no return fire from the defending side to allow one side to gain a distinct advantage.  The Tobruk game used a die roll for initiative.   On one turn the Germans chose to move second, moved up to range and attacked the British causing a few casualties and removing some of the defensive works and mine fields.  On the following turn they again won the initiative, moved first this time and took out more of the defenders, while breaking through the defenses.   At this point there were not enough British left to stem the German tide.

The last game of the year was a fictional lace wars game set in H. Beam Piper's Lord Kalvan of Otherwhen universe.   I again commanded the Ilter army.   The scenario was from the Wargame scenario book.   We got to choose seven units from the list of forces available,  I choose a heavy cavalry unit, five infantry units, and the two artillery piece unit.   The opposing side chose the two artillery piece unit and six infantry units one of which was light infantry.   Both sides got to designate one of their units as veteran and would use a die roll to determine which of the other units was raw.   I choose on of the infantry units to be veteran as did our opponents.  Both sides die rolls resulted in one of the other infantry units being raw.   Both sides had two subordinate commanders.  One of them was aggressive and the other was not willing to follow orders.   I did not know what they were like as Mike, the gamemaster told them in private prior to the start of the game.

We started the game in road column with one unit on the table and the rest following behind.  Fortunately my aggressive commanders units were the second command in the column and my insubordinate commander was the last in line.   I lead with the heavy cavalry, followed by the grenadiers.   The other two commands had two infantry units and one of the two guns.

We won initiative for the first turn and my cavalry quickly headed down the road and turned left at the junction.  The Grenadiers and the next command followed.   The third command headed off the road to the right to secure our right flank.

On the second turn my cavalry moved into position to threaten the flank of the lead two infantry battalions.  The opposing side had occupied the village with another of their infantry units, had another marching behind the village and woods to their right flank, had the two guns occupy a hill to the left of the village and had the other two infantry in front of the guns.   My grenadiers move up to the central inn at the junction.  The second command deployed the gun to the right of the inn and moved up the infantry just to the left of the grenadiers with the lead battalion on the hill.  The third command move up and deployed its gun and infantry on the right on the following turn. Due to their guns being deployed back on the hill they were firing at long range while ours were firing at intermediate range with twice the effectiveness of theirs.

On the third turn the enemy's lead battalion charged my grenadiers.   The fire from my grenadiers was not enough to halt the charge and a bloody fight ensued for control of the inn.  Both sides lost half their men and my grenadiers were forced back.  Meanwhile my cavalry charged the second battalion of infantry and routed it.   On the following turn the cavalry again charged causing that unit to run further and then hitting the enemy grenadiers in the flank routing them.    Over the course of four turns Princess Gwendolyn's regiment of horse would engage in the two charges and come under fire multiple times from the enemy's infantry.  They were able to extricate themselves from that situation and move to the left flank of our aggressive commander's infantry with only one of six bases having been lost.

Our aggressive commander had regained control of the inn and the survivors of the grenadier battalion moved up to occupy it.  While all this was happening our right flank and guns had been engaging  in a fire fight with their opposites.

The enemy's aggressive commander was the one opposing ours.   One of his infantry units charged ours on the hill and was thrown back.  This set up the situation where our infantry unit and the heavy cavalry would be able to make a joint charge into the unit that had been thrown back.  Our artillery and musket fire caused one of the infantry units in the center of their line to loose over half its men and rout.   One of our gun crews had been driven from their guns by the enemy artillery, but was able to return to their gun the next turn. Our right flank command had taken some losses during the exchange of musket and artillery fire.

At this point the game was called  as a victory for our side.  with three of the opposing infantry units having fled the battle.   Our grenadiers were at half strength and only good for occupying the inn or defending.   One unit of infantry on both sides were still at full strength.   All the other infantry on both sides had taken casualties, but were still effective.  With the game called we were not able to make the combined cavalry and infantry charge we had set up.   A lucky result for us would have seen a fourth enemy unit routed and destroyed.

The following pictures were taken by Mike, our game master. 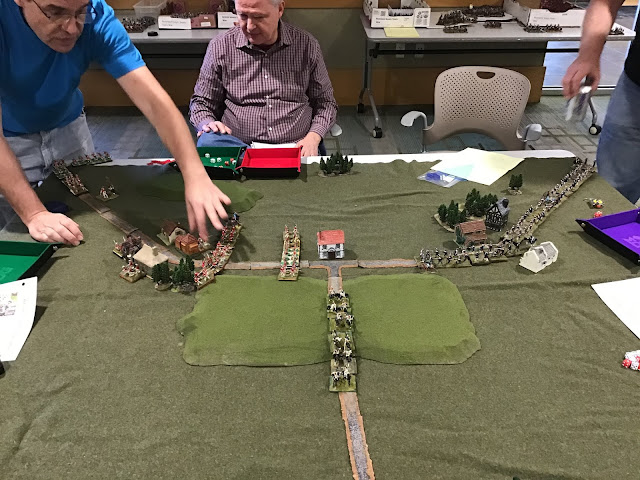 End of the first turn.  My cavalry on the road at the bottom. 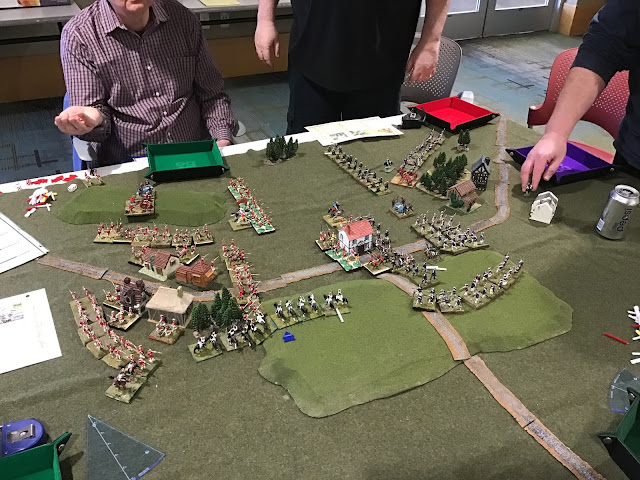 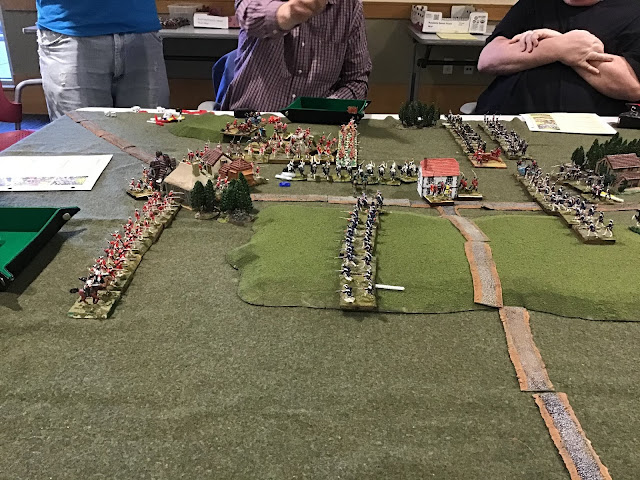 Turn four the cavalry continues charging into the flank of the opposing grenadiers. 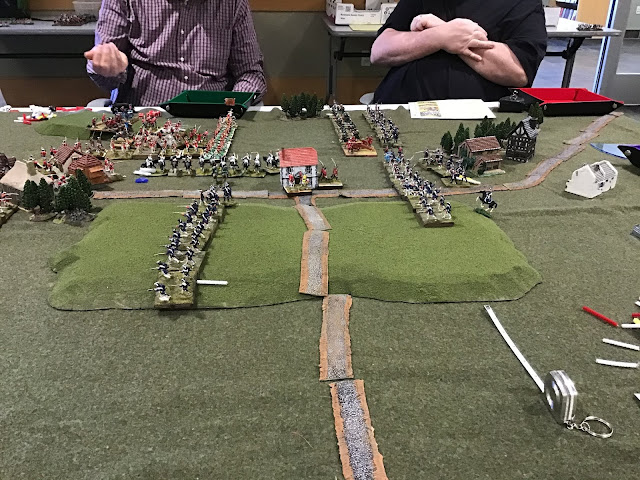 Another view of turn four. 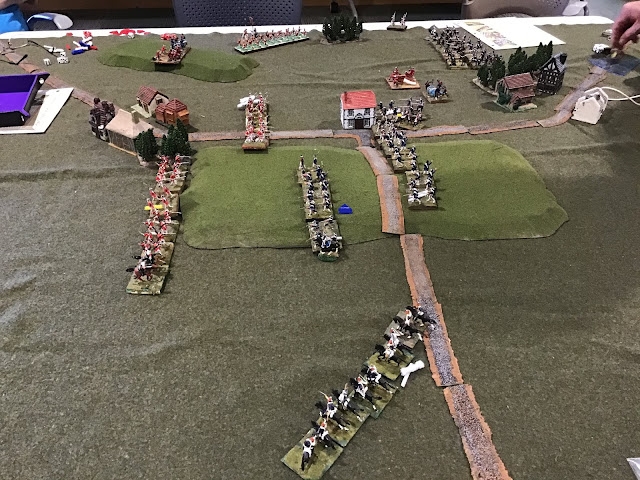 End of game our cavalry and infantry are preparing to charge. 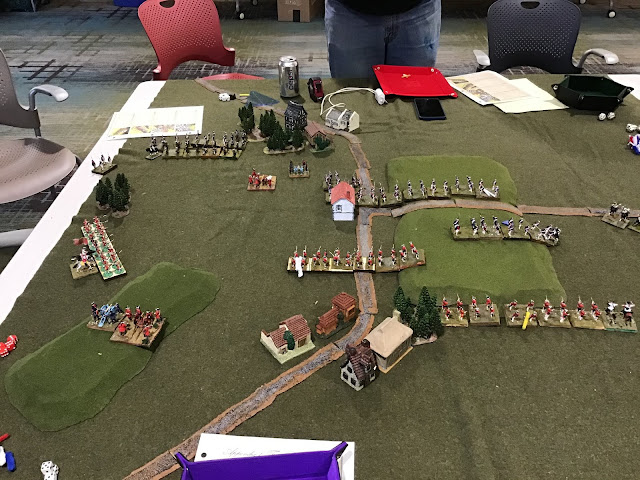 End of game from behind the other army 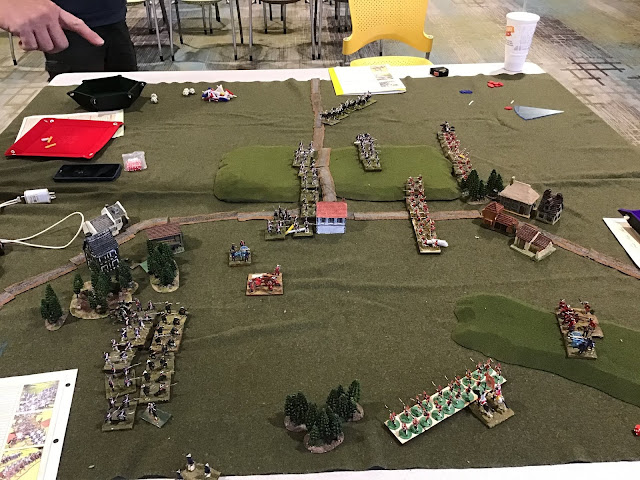 .End of game.   Our army is on the left and the other is on the right.  The unit at the bottom of the picture is their grenadiers who had recovered from being broken by our cavlary.  Our right flank had fallen back due to casualties, but was still in good order.  Their guns are on the hill at the bottom right and their other two infantry units are to the right center with one on the road and the other at the base of the hill.  The unit on the road would have taken fire from both our guns, the grenadiers and the second line of infantry on the hill for a total of 12 dice  while the cavalry and the first line would have charged the unit at the base of the hill.  While it was not guaranteed there was the chance that both of those units would have broken.


Posted by William Butler at 8:50 PM No comments: