A game of Blucher at the MWS november meeting

Played a game of Blucher today at the MWS meeting.   Hal was the game master, Dave had the Austrians, and I commanded the French.

Blucher uses a dice activation system where three dice are rolled.   The resulting number is how many units can be moved.   With a maximum of eighteen and an average of ten/eleven, the French were normally going to be able to activate two corps per turn with a maximum of three.  You can activate an entire corps if the units are close enough to each other,  followed by individual units, and then finally using the overall commander to activate any units within two base widths of the commander.   Once the number of units activated equals or exceeds the dice total that player can no longer activate any further units.  Except for cavalry which cannot fire and horse artillery which may move and fire, units can either move or fire.   Infantry units that do not move may adopt a "prepared formation, which gives them a melee advantage against cavalry, but makes them more vulnerable to fire.

I moved first each turn.   For my first turn I was able to activate the two right flank infantry corps which advanced towards the Austrians.   I made a mistake by moving the artillery forward instead of firing with them.    Dave's turn saw his two infantry corps being activated and all four artillery brigades firing on my middle infantry corps artillery driving it from the field.   For the rest of the game, when I was able to activate it the right flank artillery kept up a steady fire on one of the infantry brigades in Dave's left flank corps, knocking it down to one remaining fatigue point.   Artillery has a limited ammunition supply and the number of firing dice is reduced as it continues to fire.   I was down to my right corps artillery last fire when Dave was able to activate his left flank corps and pull the damaged infantry brigade back and place another in the line of fire.

While the right flank was firing, I moved my left infantry corps forward and began firing its artillery. My center infantry corps would remain inactive for most of the game until the final few turns.  My left corps continued its advance and the cavalry corps moved forward also with the two dragoon brigades  and artillery leading.  Dave countered by charging his two cuirassier brigades at my dragoons.   The rules have a requirement that charges must be made against an enemy unit that is closest and able to attack the charging unit.   Even though Dave's cuirassiers had more combat dice than my dragoons my die rolls were better and his cuirassiers were repulsed. 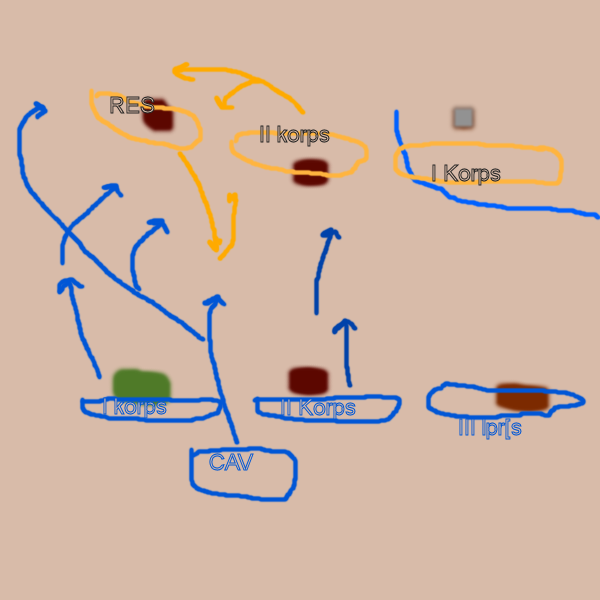 Diagram of the battle

I followed this with fire from my horse guns and charges by my dragoons into his cuirassiers, destroying one of them and inflicting more damage on the other. The cavalry action was to continue as Dave added his light horse to the cavalry melee.  Unfortunately for them they charged into my cuirassiers and were forced back.  By the time the cavalry melee ended, all four of Dave's cavalry brigades had been destroyed.  My cuirassiers had advanced beyond the hill and were now threatening to turn his right flank while the rest of the cavalry corps remained near the center.   His grenadiers moved to protect the flank and his center corps started to shift units to help the right while the forward infantry assumed prepared formations.  Before it was destroyed his last cavalry brigade was able to eliminate one of my dragoon brigades which had been weakened by artillery fire.

As my cuirassiers maneuvered to extend his line, my left flank infantry corps advanced on the two grenadier brigades. and eventually drove them off the hill on Dave's right.   The final few turns of the game saw my center corps advance and threaten his weakened center along with the destruction of one of the grenadier brigades and an Austrian line infantry brigade on my final turn.

Thanks to Hal for putting the game together.  I did not take any pictures of the game as we were using top down cards for the units.  While I did enjoy playing the game, the activation system makes it difficult for a coordinated attack with multiple corps.   Armies with large corps like the Prussians at Ligney will find it difficult to activate more than one corps per turn unless it is a multi-player game with each player commanding only one corps.

Update: added a couple of photos taken of the game by Mike O'Brien.  French are blue and Austrians are yellow.   These were taken after the Austrian cuirassiers had been destroyed (cards in left rear of photo) and just prior to their light cavalry (two brigades at bottom of the picture) engaging the French cuirassiers.   The French left wing infantry corps is at the bottom with their cavalry brigade at the very bottom of the picture.  The cavalry corps is just above and in front of them.  Austrian grenadiers are on and at the small hill at the bottom center of the picture.   The French cuirassiers would eventually end up just above the forest at the bottom left and their infantry corps would be occupying the hill.   Two Austrian infantry brigades are headed towards their right flank (cards turned 90 degrees near the center.  French artillery brigade that had been driven off is at the right edge of the table next to the drink cup. 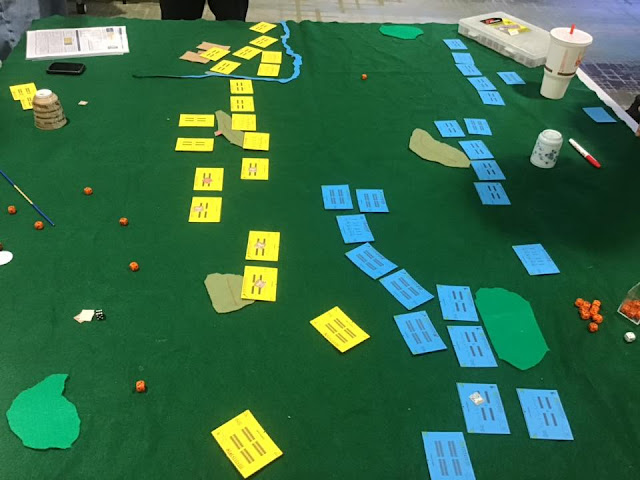 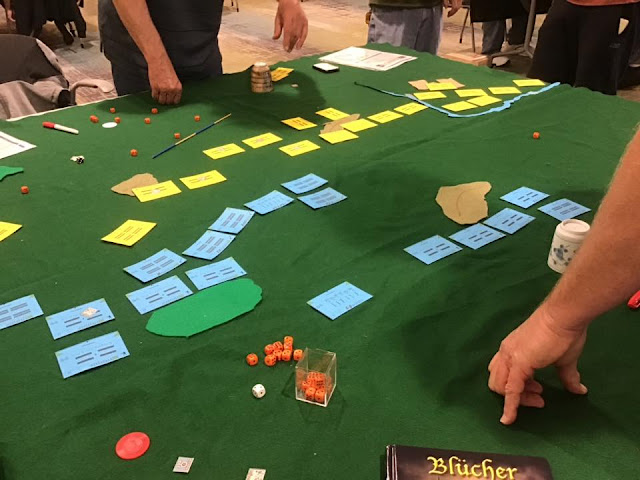 Posted by William Butler at 11:55 PM No comments: