Having established the troop types and numbers the next part is to determine how many figures are needed.

The 175 elephants fielded by both sides would be either 36 units or 43 units depending on whether each unit represents 4 or 5 elephants.   With the elephants that I got in trade a while back there are enough to field 43 units.

The total cavalry is 11,000, mostly lance armed heavy cavalry.  At four, six-figure bases per 1000 that will be 264 figures.  No additional figures needed.

The only light infantry skirmishers would be included with the elephants.

There are 10,000 Asiatic infantry and 10,000 Arab infantry.  The Achaemenid Persian infantry that I have could fill in for these.  at 24 figures per thousand that would be 480 figures.  No additional figures needed.

There are 6000 Thracians and Galatians in Ptolemy's army and 2000 Thracians and others on the Seleucid side.   At 24 figures per 1000 that would be 192 figures which can be represented by the warband infantry that I have.  No additional figures needed.

That leaves a total of 96,000 pike armed infantry.   Of these, the 20,000 Egyptians would be represented by Rapier Miniatures phalangites with the pike in the vertical position.   At 48 figures per 1000 (figures are mounted 8 wide by 3 deep on a 40mm wide base) that would be 960 figures.

The rest would be represented by Rapier's phalangites with the pike at a 45 degree angle.  At 40 per 1000 (figures are mounted on a mixture of bases that are 5 deep by 8 wide for every two bases), that would be 3040 figures.

This would require purchasing an additional 696 vertical and 1600 other phalangites and several weekends of painting.

Total numbers of figures:  43 elephants plus some light infantry escorts, 264 cavalry, 4000 phalangites, and 672 other infantry.   Grand total approximately 5000 figures.  About 600 more figures than used for the battle of Asculum earlier this year.
Posted by William Butler at 7:07 PM No comments:

The Burning of Buck

On February 2nd I ran a game of Scutarii using the fantasy variant rules at the Game Kastle in Fremont, CA.    The forces involved where two bands of Orcs commanded by Kirk Bollinger and John Leary.  They were allied with some Elves commanded by Ken Mackey.    Their objective was to eliminate the human settlement that had been cutting down the forest.   Defending the village were Dan Rygasewicz and Kent Reuber.  Kent commanded the local defense force and Dan was bringing a human relief force to aid the village.   There was also another relief force of Dwarf infantry that Kent would later command.  The store opened at 11 and the game started about 30 minutes later.   We were able to finish by 3 in the afternoon.

The elves were all elite drilled regulars,  the orcs were undrilled militia (think Celts),  the dwarfs were average, drilled, and treated as Roman trained infantry,  the village defenders were untrained militia, and the relief force were drilled militia with the heavy infantry treated as Roman trained infantry.  The elves had 5000 infantry and 1000 cavalry.   The orcs had 10,000 infantry  and 4 giants (ugly elephants) in each force, with 60 chariots in one group and 3000 wolf riders in the other.   The village defenders numbered 6000 infantry.  The dwarfs had 10,000 infantry.  The human relief force numbered 1500 heavy cavalry, 1000 light cavalry, 2000 heavy infantry and 1000 light infantry.

The local defense force started on table guarding the village.  It was an equal mix of spear armed infantry and archers.   The Human relief force was composed of infantry and cavalry with a mix of light and heavy for both.

The attacking force was coming from the south.  The elves formed the right flank of the attackers with the Orcs forming the central and left groups.   As the left group advanced through the woods it came across a burned out manor.   One unit was sent to investigate and find any loot or supplies while the rest continued their advance.  After a couple of turns rummaging through the ruins they were suddenly attacked by a group of skeletons.  It took a couple of turns for them and another unit of Orcs to destroy the skeletons.

On the other flank the elves advanced quickly.  On the third turn the human relief force arrived on the road heading to the village.  Upon seeing the elves they formed a battle line with their entire force instead of continuing to move to the village..   The elves left their cavalry to watch them while their infantry moved towards the village.   There was a marshy swamp and a stream between them and the humans that gave them protection from being attacked by the relief force.   However, they passed to close to the swamp and were set upon by the swamp dwellers.   After taking some damage from them they were able to drive them off and continued on to the village.   The elves were able to get into a position just to the right of the central orc force and between the relief force and the village.

The central orc force had advanced up the road leading to the village and launched an attack with their chariots.  After several rounds of fighting the chariots were routed, but the orc infantry held and renewed the attack against the village defenders.   One group of orc warriors decided to loot the tower in the middle of the table.  This turned out to be a bit unwise.   The tower was occupied by an elderly wizard who did not like to be disturbed.   He quickly stormed up the stairs to the top of the tower, took one look at the orcs, and proceeded to cast a huge fireball at them.   Unfortunately for him the spell backfired (he rolled a double 10) and both he and his tower were blown to pieces leaving a mushroom cloud over the pile of rubble that remained.

The human defenders were now in trouble as they were being attacked from the front by the central orc force, being threatened on their left flank by the elves and about to be attacked from the right by the wolf ricers of the left orc force.

At this point the dwarf legions started to arrive on the northwest road.  The western orc force turned to face them, seeking to contain them.   By the time most of the dwarfs had arrived they faced a blocking force of orc infantry, wolf riders and a giant.

Meanwhile the village defenders morale collapsed and the orcs overran their positions.  With no where to run the villagers were slaughtered and the orcs proceeded to pillage and burn the village.  One group of orc warriors went mad with blood lust and attacked a unit of elves that was next to them.

On the eastern end of the battle the human relief force was not able to get past the elves.  They had done some damage with their priest and archery, but not enough to affect the morale of the elves.  Eventually the priest cast one too many spells and dissolved into a pile of goo.

On the western end of the table the dwarfs and orcs were hacking away at each other.   Heroes on both sides fell as the combat went first to the dwarfs, then to the orcs, and back to the dwarfs.   The orc general died leading his warriors against the dwarfs, causing the morale of a number of units to falter.  Their giant fled the field shortly after this.

At this point, the two relief forces would not be able to get to the village in time to save any of it.   Half the town was already destroyed and the other half was being torn apart.  The Elves and orcs were declared the winners as they had accomplished all their objectives.   Human losses were the 6000 infantry guarding the village along with the village and its inhabitants.   The elves lost the one unit of 500 infantry attacked by the orcs.  While the orcs had lost a war lord, several heroes, their chariots, and some warriors.   Dwarf casualties were minimal with only a few dead and wounded.

Thanks to Dan for bringing the trees and thanks to all for participating. 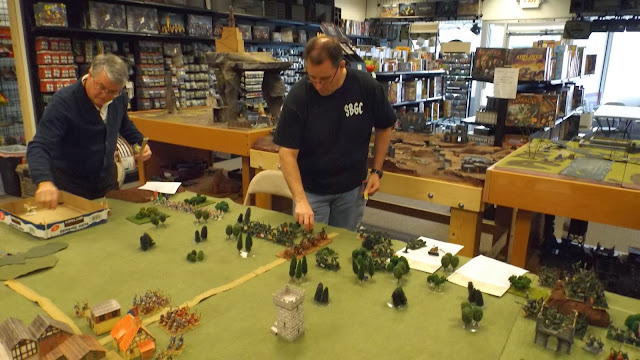 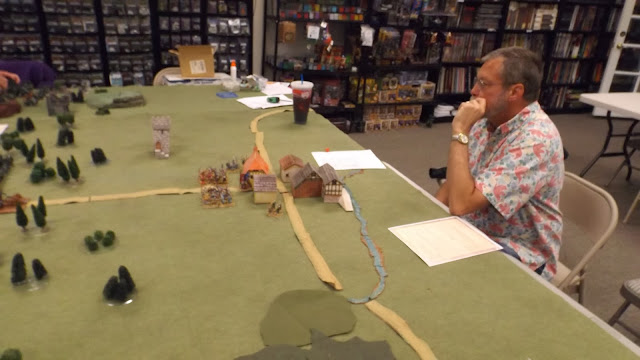 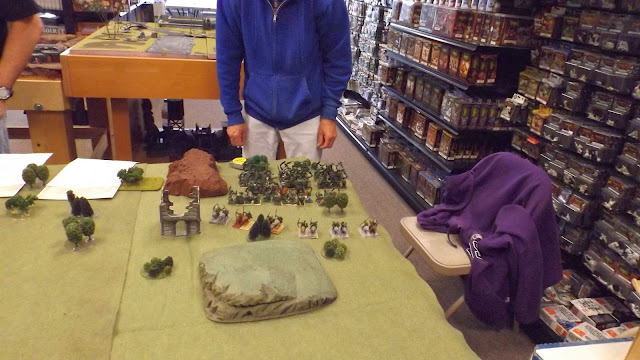 John Leary's torso commanding the left orc force. My apologies to John as I thought had had got his head in the picture also. 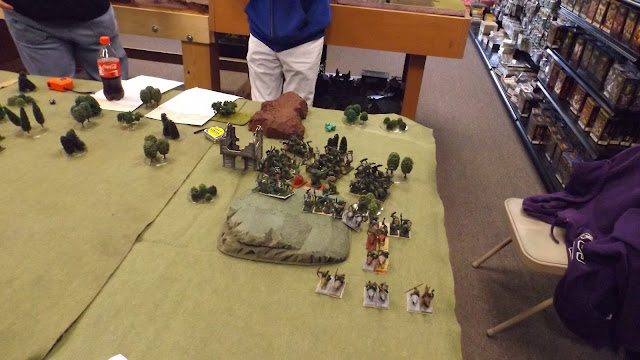 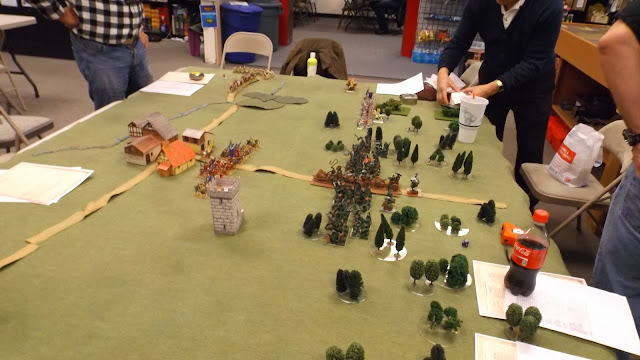 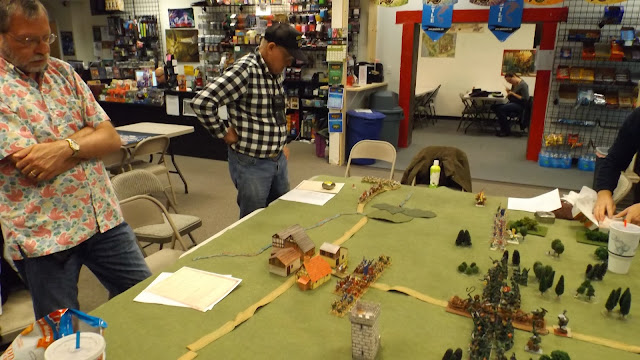 Dan Rygasewicz in the back with the human relief force arriving on the road. 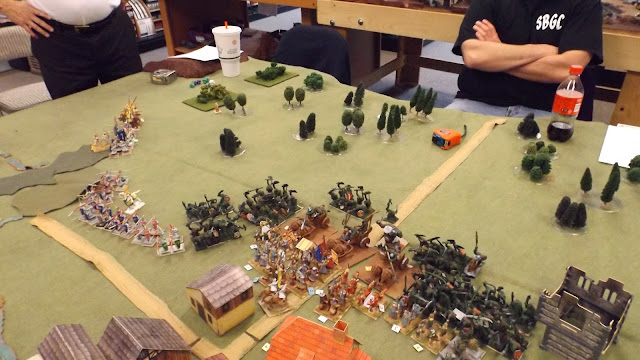 The village under attack.  The remains of the wizards tower at the bottom right. 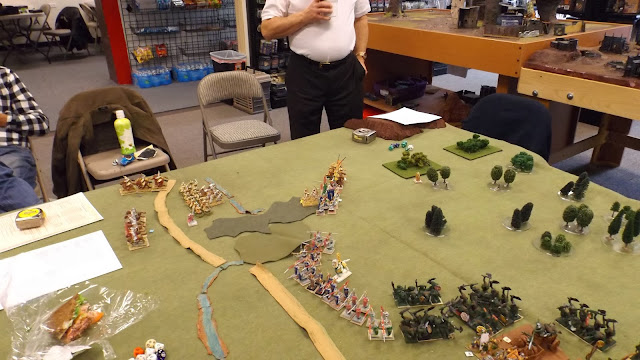 The swamp dwellers attacking the elves. 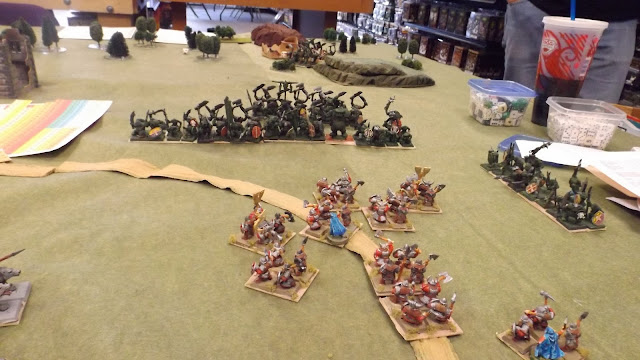 The dwarf legions arrive.  They would eventually form a half circle and attack the orcs to their left, front and right. 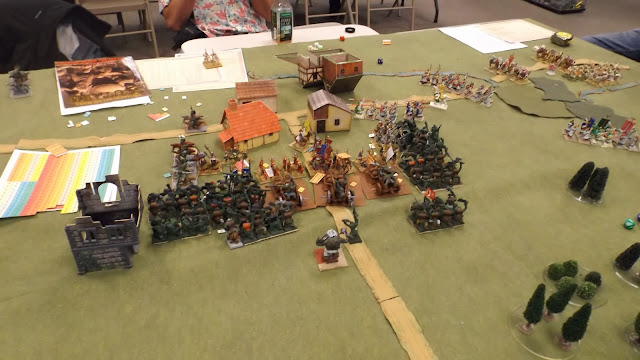 View from behind the orc battle line prior to the chariots routing.   The tooth pick factory has been destroyed at this point. 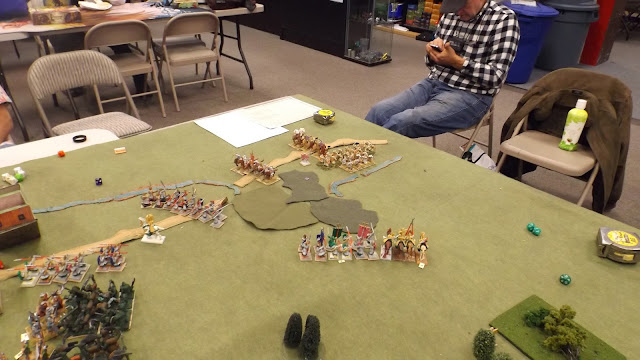 The elves and humans face each other across the stream and marsh.
Posted by William Butler at 6:14 PM No comments: