My friend and i got together on Saturday evening for a couple of games. The first was a re-fight of Raphaia using Strategos II. At first the battle followed history as the right wings of both armies defeated their opponents and the centers stared at each other across the open plain. However, the Seleucid right wing turned on the center of the Egyptian army as their pike phalanx advanced to engage the Seleucid phalanx. Both phalanxes were wearing each other out with hard fighting. All the elephants on both sides had been routed or slain by now. Half the levy infantry on the Seleucid left managed to hang on against a combined frontal and flank attack (poor die rolls by Ptolemy saved them from being broken). Leading his cavalry guard Antiochus was able to shatter 16,000 egyptian levy pikes and the resulting army morale check saw the majority of Ptolemy's army withdraw. The final result was a close victory for Antiochus III.

Dicing for the game length resulted in a maximum of seven turns. The battlefield had several hills and a forest with most of the terrain on the Corinthian side. The Corinthians deployed with the pikes in the center, the light infantry to their left, most of the heavy cavalry and 1000 of the light cavalry on the right flank, and 1000 companions and 2000 light cavalry on the left behind the woods. The Zamorans split their heavy cavalry evenly on both flanks with 1000 light horse on the outside of both flanks and placed the remaining 6000 light horse in the center. The Corinthian commander was on his right flank with the cavalry guard and the Zamoran commander was opposite him. The Corinthian phalanx pushed forward relentlessly as the Zamoran light horse loosed arrows at it. Some of the phalangites fell to archery fire and a gap opened between the two halves of the phalanx. The Zamoran right wing destroyed the Corinthian left wing, losing one unit of 1000 heavy cavalry and turned to take the phalanx in the rear. The opposing commanders' wings only saw minor skirmishing as both made poor command rolls throughout the game and were not able to close when we called the game after three turns due to time. It was determined that the Zamoran light horse in the center would have been able to eventually surround the phalanx and slow it down enough for the right wing Zamoran cavalry to eventually arrive and join in. We judged it to be a minor win for the Zamorans. Loses were most of one unit of Zamoran heavy cavalry, one unit of Corinthian heavy cavalry, 2 units of Corinthian light cavalry, and part of one unit of Corinthian phalangites.

Unfortunately i forgot to take pictures of the battles. This was the first time that my friend had played Strategos II and the first time that I had played Warmaster Ancients. Both of us had played several games with the other rules though. Both of us had an enjoyable time with both sets of rules. A Strategos game usually lasts a maximum of ninety minutes. The Warmaster Ancients game would probably have lasted about three hours or so. Compared to Field of Glory, both rules were slightly less complex. All three sets of rules provided a good game. Warmaster Ancients is probably the least historical of the three. Strategos II is better suited for only one player per side, though some battles could be fought with two per side. For multi-player games with inexperienced players i would probably choose Warmaster Ancients over Field of Glory, but i find Field of Glory to provide a better representation of ancient combat over Warmaster Ancients and would choose FoG for more experienced gamers. For limited amount of time or a campaign where multiple battles needed to be resolved quickly i would choose Strategos II/Lost Battles (the latest version of the Strategos rule system).
Posted by William Butler at 6:46 PM 1 comment: 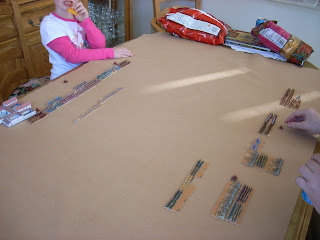 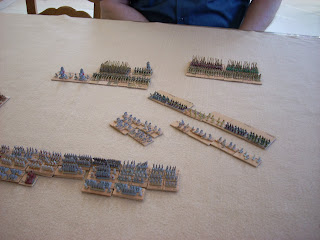 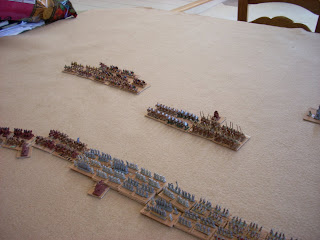 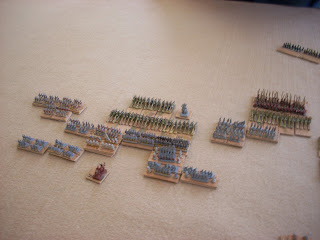 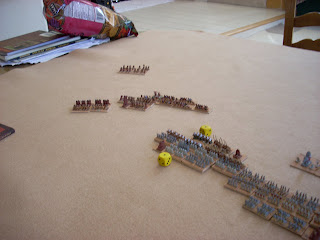 (We found the rules to be well written and playable. The game took about three to four hours to play including setting up the terrain and having to look up items in the rules that we were not sure about, this being only the first time for my friend and second time for me playing Field of Glory. )
Posted by William Butler at 9:32 AM No comments: