Some things that I forgot to mention in the previous post were that we had a one week pause while Ken fought the miniature battles.   All three were fought in one day using Scutarii starting about 9 in the morning and finishing by 5 in the late after noon.   I will be adding this to the previous post.

Hal was supposed to have the next turn, but due to medical complications we had to skip his turn and go to Gary's.   John asked to join the campaign and volunteered to help Hal.  Gary spent all the money in his treasury buying extra cards from the deck.  He then staged a coup in Eridanus and took over Piscis.

The campaign map was filling up with only a few countries unclaimed.   While players could stage coups, no military attacks were allowed during the first year in order to allow the players to establish their territories.


THE TURMOIL AND UNREST IN PISCIS DUE TO THE DEATH OF KING TMOSIC HAS ENDED.   RALPH MCVI WAS CROWNED THIS MONTH BY THE ARCHBISHOP BUCKET (PRONOUNCED BOO-KAY).   ALL THE PROPER PROTOCALS WERE FOLLOWED DURING THE CORONATION CEREMONY.   FOLLOWING THE CORONATION KING RALPH MCVI AND HIS GUESTS RETIRED TO THE GRAND HALL FOR A CANDLIGHT SUPPER SERVED ON FINE CHINA WITH HAND-PAINTED PERIWINKLES.

THE ARCHBISHOP BUCKET (PRONOUNCED BOO-KAY) HAS ANNOUNCED THAT ERIDANUS WILL WITHDRAW FROM THE GRAND CONFEDERATION AND JOIN WITH ERIDANUS.   WHEN ASKED WHY ERIDANUS WOULD DO THIS ARCHBISHOP BUCKET REPLIED, “BECAUSE OF THE RECENT INVASION THE GRAND CONFEDERATION WAS NO LONGER KEEPING UP APPEARANCES.  AFTER ALL, WHO WANTS RUFFIANS TROMPING ABOUT IN YOUR CASTLE WEARING DIRTY SHOES?  THE INVASION HAS TRULY ALARMED US”


PASSING THROUGH THE GULF OF MIRFAK, THE MIGHTY FLEET OF THE GREAT KHAN ARRIVED IN SAIPH.   THE INFLUX OF TRADE GOODS HAS BROUGHT GREAT WEALTH TO THIS ISLAND KINGDOM.   PRINCE NICHOLAS OF AQUILA REPORTEDLY BOUGHT MANY FINE CARPETS AND TAPESTRIES FOR HIS SCHLOSS IN SAIPH. 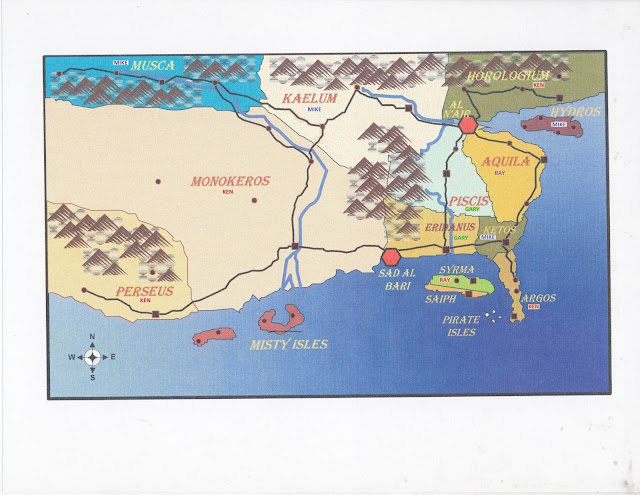 Posted by William Butler at 2:43 AM