Year Four started with The Grand Confederation flexing its military might taking control of Aquila and the Misty Isles.   The story of the epic battle between the Wizard and Silidon has been lost.  More conflicts would occur during the year as relations between the factions deteriorated.


GREAT DRAGON SEEN IN THE SKIES OF VELA


A GREAT DRAGON, KNOWN AS CRAWFORD, HAS MADE HIS HOME IN THE MOUNTAIN VILLAGE OF GROTBUSS IN HOROLOGIUM.   SOME SAY THAT A MYSTERIOUS SORCEROR HAS SUMMONED HIM.  OTHERS SAY THAT IT WAS THE MONEY FROM BROWN DORT‘S TREASURY THAT WAS USED TO ENTICE HIM FROM HIS MOUNTAIN LAIR..  SHORTLY AFTER CRAWFORD ARRIVED IN HOROLOGIUM HE WAS SENT FLYING OFF TO THE MISTY ISLES.  UPON THE DRAGON’S ARRIVAL, THE SORCEROR SILIDON SWIFTLY CHANGED HIS ALLEGIENCE FROM THE ALLIANCE TO THE GRAND CONFEDERATION WHICH MADE THE FOLLOWING ANNOUNCEMENT:


The Ancient Rune known as KEN has been restored to its rightful place in the Misty Isles.


Glistening in the morning sun, the crystal-white wings of a Dragon brought the Rune to the Isles and consummated a peaceful transition of power. The Dragon even presented The Sorcerer Silidon a gift: a crystal ball with which Silidon may further enhance the power of the Rune.


The Rune KEN means the fire or passion of creativity. It is light out of confusion and darkness. It is inspiration, creativity, and enlightenment.

﻿
This is a Rune of good luck and fortune. It imbibes energy, strength, power, and positivity. It shines for vitality, health, and stamina. It indicates recovery from illnesses or negative situations. With KEN in the Misty Isles, all may look forward to new times of peace and prosperity.


STATEMENT FROM THE ALLIANCE


A battered ketch limped into Nekkar with the news of Silidon’s betrayal.  The crew reported that at first sight of the Codragon, Silidon disposed of his Argonian advisors and had Count Ategic, the Argonian chief minister, beheaded.  While Silidon was busy welcoming the Grand Confederation and offering his allegiance, the remainder of the Argonian staff retrieved the Argonian banner from the capitol’s main spire, and made their escape from the Misty Isles.


King Faelrud passed the news on to the rest of the Alliance with mixed emotions.  The conquest of the Misty Isles had not been a priority, but the loss of Count Ategic was disturbing.  He had been a good and able minister.  His abilities would be missed.


The Alliance cast a watchful eye upon the Grand Confederation.  King Faelrud, Rolf the Rough, Emperor InwharIII and Anndoquat the Sadar issued a joint statement:


“The Sorcerer known as Silidon is nothing more than a common criminal and an enemy to peaceful nations.  The Alliance granted him quarter once, but it will not happen again.  We are saddened by his treachery and the loss of the good Count Ategic.   As for the Grand Confederation, let it be known that our loss of the Misty Isles is your gain, but beware for Silidon is not your ally.  We bear you no grudge, but we humbly request you to discard the murdering scum Silidon so that we may deal with him.  Do not let a false allegiance place your future between Silidon and the Alliance.”


IN AN ACT OF NAKED AGGRESSION THE SNISS MERCENARIES HAVE OCCUPIED AQUILA.   THEY WERE RECENTLY HIRED BY THE MYSTERIOUS RULER OF HOROLOGIUM AND IMMEDIATELY ORDERED TO MARCH INTO AQUIILA AND SIEZE CONTROL OF THE GOVERNMENT.  .   CZAR FERDINAND II REMAINS AS RULER OF AQUILA, BUT IS NOW A PUPPET OF THE HOROLOGIUM GOVERNMENT.


AS TO WHO THE MYSTERIOUS RULER OF HOROLOGIUM IS – NO ONE KNOWS.   ALL ORDERS ARE ISSUED FROM SECURELY GUARDED TOWER IN YILDUN, BUT NO OUTSIDERS HAVE BEEN ALLOWED IN.  IT IS KNOWN THAT THE TREASURY OF PERSEUS ENDED UP THERE FOLLOWING THE OVERTHROW OF BROWN DORT.  THERE ARE RUMORS OF A POWERFUL CROWN CONTAINING THE DISEMBODIED SPIRIT OFANANCIENT RULER THAT EXCERSIZES HYPNOTIC CONTROL OVER THE LOCAL CITIZENS.


AQUILA WAS UNABLE TO DEFEND ITSELF AGAINST THE INVASION DUE TO ITS LACK OF A STANDING ARMY.   IT WOULD APPEAR THAT WHILE HE WAS IN CHARGE, PRINCE NICHOLAS ONLY SPENT THE GOVERNMENT’S MONEY ON PLEASURE PALACES INSTEAD OF SOLDIERS.


THE FOLLOWING STATEMENT WAS ISSUED BY THE GOVERNMENT OF HOROLOGIUM:


My apologies to Czar Ferdinand II, but it seemed like the best way to protect the kind peoples of Aquila was to put them under my umbrella and help them raise their own army by sending the Sniss Mercenaries to train the Gruusboatmen to fight and defend their land against the perils posed by the armies stationed in Picis and Kaelum.  The transfer of allegiance to the Grand Confederation was peaceful. No sword was raised, and the Lesath City Troops are well on their way to becoming a respectable and respected fighting force, worthy of the great peoples of Aquila. 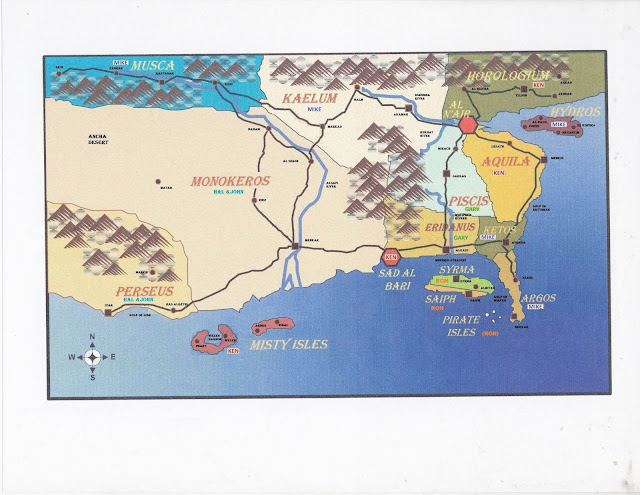 Posted by William Butler at 8:01 PM