Although there are a couple of missing issues not much happened for the last two player turns of year four and the first two of year five.    Gary, Hal and John, Ken, and Ron added additional cards to their hands, but decided to bide their time before going after any of the other players.  There was one item that should have been mentioned in the previous posting and that was Ron taking control of Perseus with Black Dan.  One major event that did occur was the shuffle the deck card.   All the cards that had been discarded plus any remaining cards that were in the deck were combined and shuffled into a new deck.   This also added a special event card that would immediately end the campaign when a player drew it from the deck.   The player who drew the card would not be able to do anything for his turn and the winner of the campaign would be determined.

THE MOLTAR TRADER HAS ARRIVED ON THE SOUTH COAST OF VELA.   PORTS OF CALL WERE AT PERSEUS AND SAD-AL-BARI.  THE INFLUX OF TRADE GOODS ALSO BROUGHT PROFITS TO THE MARKETS OF KAELUM, PISCIS, AND AQUILA.


AFTER TRAVELLING ACROSS THE ANCHA DESERT THE CRANDAR CARAVAN ARRIVED IN THE GREAT CITY OF AKAMAR.     MERCHANTS FROM AS FAR AWAY AS THE MISTY ISLES, IN ADDTITION TO THE USUAL MERCHANTS FROM PISCIS AND AQUILA, WERE IN THE CITY TO BARTER WITH THE CARAVAN’S TRADERS FOR THEIR GOODS.

THE MERCENARY COMMANDER, KARL DOENUTZ, HAS BEEN HIRED TO COMMAND THE FNEBISH ARMADA.   THE FLEET HAS BEEN STATIONED IN THE CITY OF SAIPH
FURTHER INCREASE IN PIRATE ACTIVITY

THE PIRATE FLEET OF CHU HAS BEEN SPOTTED IN THE GULF OF MIRFAK CAUSING EVEN MORE ALARM AMONGST THE MEERCHANT HOUSES.   IT WOULD APPEAR THAT LITTLE CAN BE DONE TO COUNTER THEIR DEPREDATIONS AS THEY ARE BEING SUPPORTED BY MORE THAN ONE FACTION. 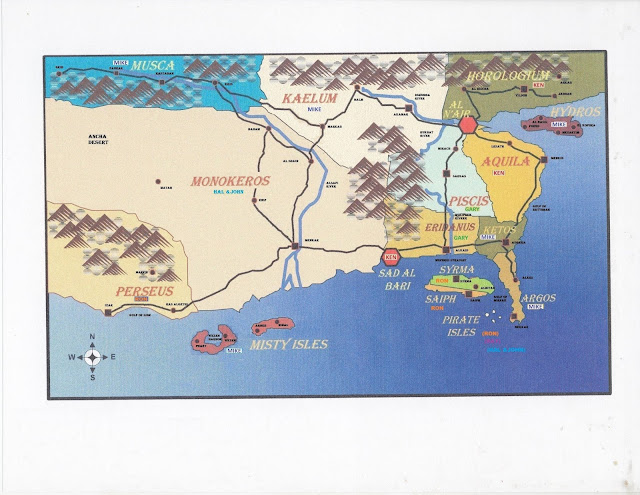 Posted by William Butler at 8:52 PM