The following is the first issue of the Akamar Herald.   The first part provides news of events during the campaign.   The last part lists the countries controlled, the amount of money left in each player's treasury, and cards available to be chosen from the discard pile.  Ken made a bold play for his first turn, taking control of seven countries.   Many of the cards he melded only had political control values.  He was gambling that the other players would not be able to meld enough cards to make a political coup of a country he controlled or a military conquest by melding a country with a card that had an army and conquering one of his from a neighboring country.   If he held onto all his countries he would have an income of 21 talents for the second campaign year/round of turns.   Players without a country would only receive two talents of income.


The mighty ships of Wu are available to assist any who seek to secure their merchant fleets from depredations of others.


Ken purchased an additional card for two talents in addition to the two free cards that he would normally receive from the deck.  After melding the above countries he discarded the privateers of wu. 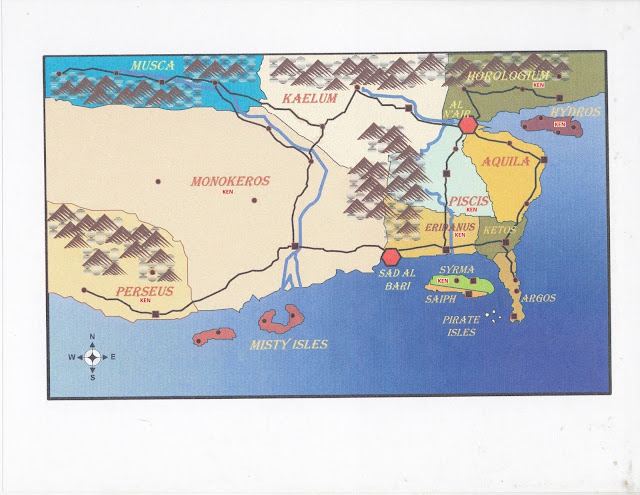 The campaign map with Ken's name added to the countries he controlled.  Except for the two island nations his countries are all connected.   This would allow armies from any of those countries to be moved from one end of his empire to the other, combine forces, and attack an adjacent country in one turn.  Ships would be needed to transport armies to attack or attack from an island nation.

Posted by William Butler at 7:16 AM