I decided to spend some time working on another project, having spent the last couple of months painting 28mm fantasy figures.  I am still doing some painting, but I am not spending as much time doing so as I previously had.

For the past week and a half I have been assembling some tanks and IFV's for my 28mm science fiction figures.  These are from the free website that I previously mentioned. Free Items  ;I had to use Paintshop Pro and import the camo scheme from ones that I previously made.  This took a couple of days to complete.

The models are better than the other one I had made, but the directions could use a couple of additional diagrams to help with assembling them.  They include a variety of detail parts and choice of weapons for the IFV and secondary armament for the tank.  I chose to use the smaller remote controlled turret for the IFV and chose the auto-cannon for it.  The tank also has a remote controlled turret, but I decided to not use it due to its large size.  I also added thumbtacks to the turrets to allow them to be rotated. and also made some other minor modifications to the locations of items on the tank turret and the IFV turret location.

I did post a picture of some of the figures in a previous post. See previous post They are from Anvil Industries.   These were available in a set called the Martian Orbital Fusiliers under their regiments range.  I purchased three of the 10 figure sets along with a six man heavy weapons set and a five man command set in order to get the free shipping.  Purchasing the two additional sets of 10 figures reduced the cost per set by four UK pounds.

This set of figures is no longer listed,, but all the parts to make the figures are still listed on their site.  These include the Gothic Void helmet, and torsos (the specialist weapon guy has the plain back and the rest have the standard back), armored legs and arms, and the Tesla disintegrator under the rifles with stocks range.

After priming them with white spray primer, I painted the figures with a rough wash of a bluish grey color to give them a similar camo pattern to the vehicles.  The wash left different parts of the figures with dark, medium, and light patches. 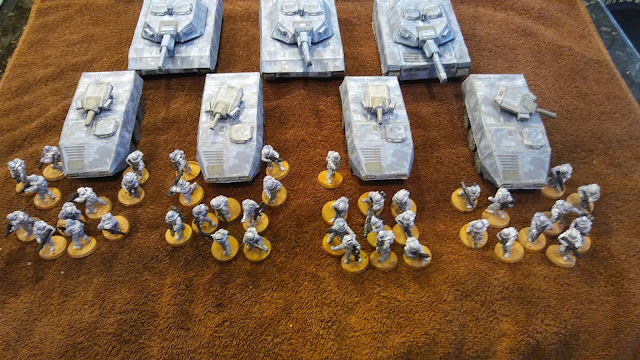 The complete force.  Three tanks, four IFV's, one command squad with 11 figures and four ten man squads.   The ten man squads have a two man ATGM team, two team leaders with rifles, and six riflemen.  The command squad has 11 men armed with rifles.  This gives me 15 units and a commander for Wiley Games Bigger Battles rules.  These are for the Federation armed forces.  One of several factions of the Human Space setting which also includes the Panthari Imperium and the Domain. 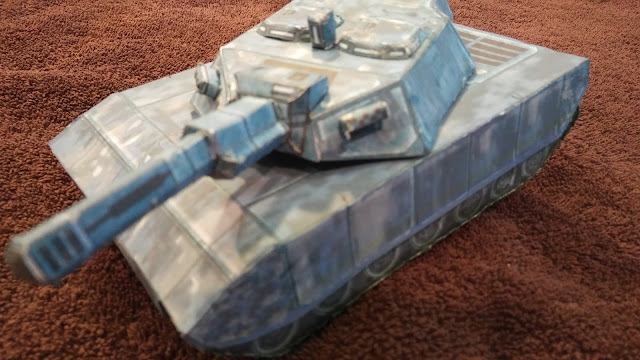 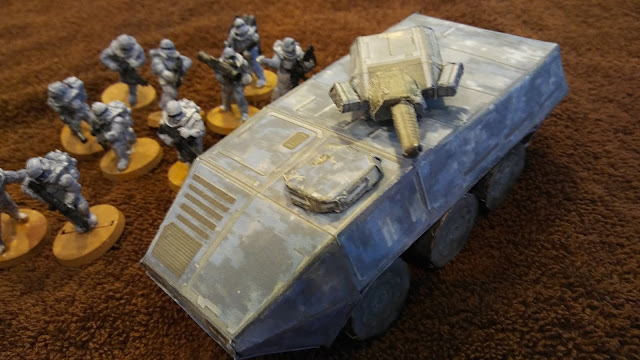 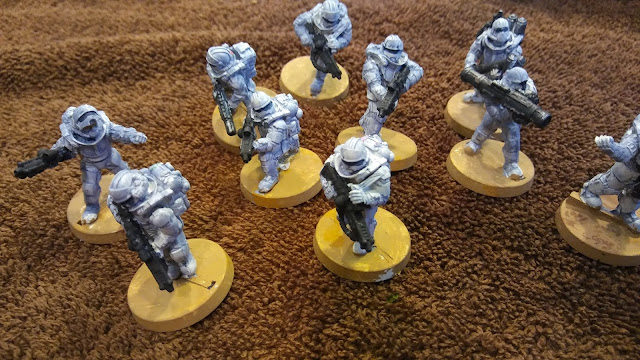 Close-up of the ten man squad.  The missile team is in the top right corner,  The heavy weapons man is just to the left of the figure at the top center. One of the two team leaders is at left center and the other is cut off at the right center.  The multi-part figures allow a variety of poses.  While there are some similar poses in the four squads they are all have minor differences.