Played a Franco-Prussian War game at the Miniature Wargaming Society of Sacramento meeting yesterday with Gary Bitters 2mm figures.   The rules were Bloody Big Battles.   Each unit represents 1000 infantry or cavalry or 24 guns.

The battle was Coulmiers, fought on November 9th 1870 between the French and the Bavarians.   This was one of the few battles that the French won during the war.    The scenario is an extra one that is available for free on the Bloody Big Battles Yahoo group.   The Bavarians are outnumbered almost 2:1, but have much better quality troops than the French.

In order to win the French must capture at least five of the seven objectives on the table.   The Bavarians have the option of deploying one of their formations forward of their main position in one of two villages.   Not doing so allows the French to deploy 12 inches in from their starting edge instead of starting at the edge of the table.   There is also the possibility that one or both sides might receive one of two re-enforcements on turn five.   The scenario has a seven turn limit.

Mike O'Brien chose the French and I commanded the Bavarians.   I chose to deploy one of my units in the village in front of the main objective town, which was worth two objectives if the French captured it.    By deploying the one unit forward the French were forced  to spend at least their first turn attempting to reach the point where they would have started otherwise. 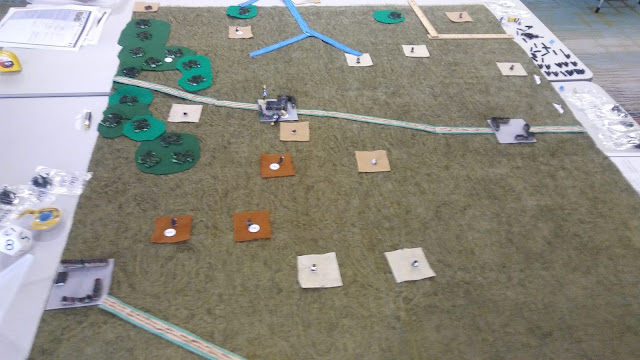 View of the table from the north edge.   White dots are objectives, tan squares are villages, grey squares are towns. 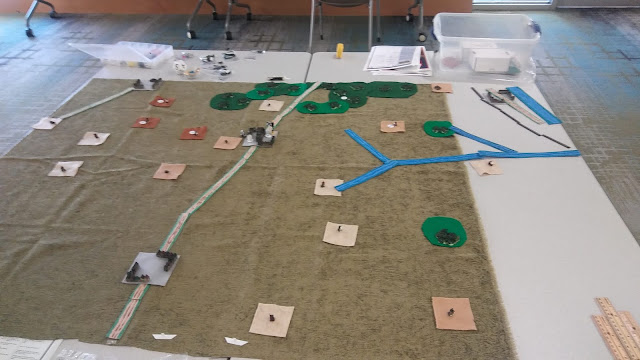 View from the French starting edge.

Movement is variable, based on a die roll and modifiers for formation, etc.   Mike was plagued by bad movement die rolls throughout the game.   The formations advancing through the central part of the table took at least three to move the first twelve inches onto the table.   Mike's right flank was able to advance fairly quickly while this was happening.   My forward formation was able to fire on one of his units advancing in the center disrupting it and halting its advance for a couple of turns. 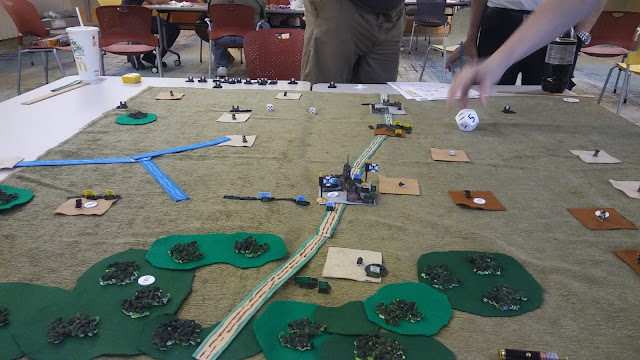 View from my side of the table.   My units are deployed with the forward formation in the village near the top center with earthworks.

Mike decided to take a chance and charged his cavalry unit into my forward formation.   He was able to charge it from an angle that prevented defensive fire.   Though the village did provide a combat bonus, my poor die roll combined with Mike's good roll saw my forward infantry formation driven from the village with losses.   My original plan was to only hold the village for one turn and then withdraw back to my main line at the objective town.   However,   I choose to remain their longer as Mike's movement rolls had kept them from being pressured and they were to halt the advance of other units.   Having been driven back a full move by the French charge, my movement die roll saw the formation recover and move back to where I wanted them in one move instead of two.

Mike continued his advance at this point though poor movement die rolls and disrupting fire from my artillery continued to slow his advance.   I made the mistake of deciding to move my cavalry from my right to help delay the advancing French on my left instead of moving them further forward on the my right to engage the French cavalry and try and turn the French left.   This delayed them two turns as they returned to position.   Mike had advanced his cavalry, but a poor movement die roll on the next turn left them frozen in place and vulnerable to a flank attack by my cavalry.   I was able to score full moves with both units and charged the French cavalry in the flank.   What should have been a victory for my horse turned into a draw due to a low score on my die and a high one on Mikes,  Mike was unable to recover from disruption on his following turn and on my turn my cavalry recovered and again charged into Mike's  only to see another drawn combat.  (Note: this was the type of combat result, not an actual tied die score),  This left my disrupted cavalry vulnerable to a combined charge from the French cavalry to the front, who had recovered and a flanking attack from the French infantry which had taken the first five turns of the game to advance a little over 12 inches from their edge.  (That unit had several no movement die rolls)  The attack saw my cavalry destroyed one unit at a time as the first attack enabled the French to exploit their victory.

Meanwhile, the right flank French had been able to finally cross the stream and drive my left most unit from the objective village on that side.   That unit destroyed on the next turn by four times its number of French infantry.   On turn five Mike's roll for re-enforcements saw the arrival of several French infantry units on that side which were able to start just six inches from my units.   Fortunately, I was able to pivot my infantry unit on my left center to face the advancing French.    That unit was able to throw back several attacks.

My re-enforcement die roll gave me an infantry formation that arrived in my center rear.   this unit was able to keep the French from gaining the woods objective on the left rear of my edge.   My formation in the objective town was unable to prevent the French from charging it due to a poor firing die roll, but the melee combat saw the French thrown back with losses.  Shooting from that formation had already disrupted and damaged several formations of French infantry rendering them ineffective. 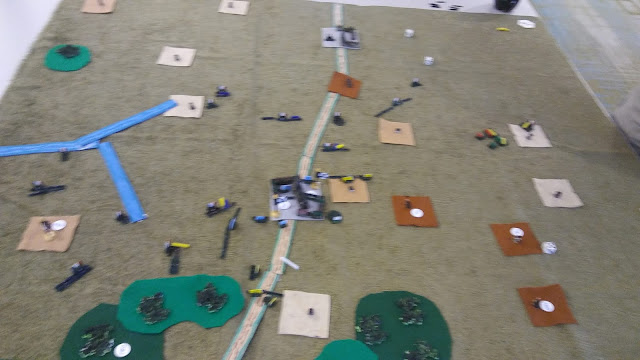 End of turn five.   My re-enforcing infantry has arrived on the road at the bottom center.   The French re-enforcements have advanced on my left flank and my left center unit has pivoted to face them.   Their fire along with the artillery next to the woods and road has disrupted the French (yellow markers).   At the right center my cavalry will soon be attacked by the French cavalry to its front and the infantry to its left rear.

It was now the final turn of the game.   The French had only gained one objective at this point.   They had two units that were within a move of two objectives on my right and had several units that might have been able to possibly advance far enough to engage the infantry unit that I had holding the woods.    While the infantry unit on my right was able to make a full move, the French cavalry once again balked at moving and remained where they were.   The French infantry on my left were unable to advance far enough due to bad die rolls and defensive fire from my artillery and infantry on that flank. 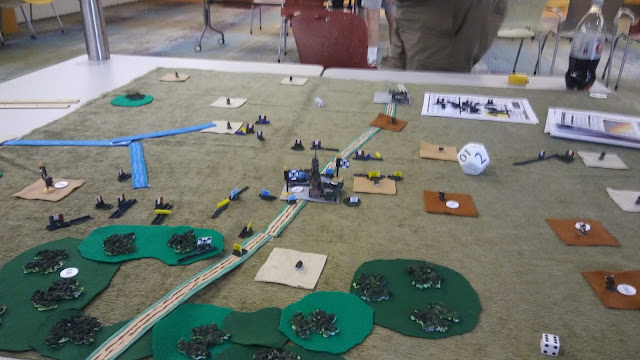 Final positions.   My left flank infantry is disrupted, but is still holding and its fire along with the artillery has halted the French on my left.   In the center are multiple damaged and disrupted French infantry formations.  The big white die is the turn indicator.   To its right are the French infantry and cavalry that destroyed mine.   The Bavarian infantry formation that had held the forward village is in the village to the right of the town.   There is a possibility that if your movement die scores high enough that you can recover lost stands.   However, I was never able to roll high enough for that unit to recover its loss, while Mike did make one roll that was high enough to recover one lost stand.

Final score for the battle was 4000 cavalry and 3000 infantry lost by the Bavarians and about 8000 infantry( I didn't take a count of their losses) lost by the French and only two objectives captured out of seven on the table.   A victory for the Bavarians.

Update - I enjoyed playing the rules and will take part in Gary's next game.

Did you enjoy the rules, Bill?

Most definitely Aaron. Enough that I asked Gary to use his 3d printer to make armies and buildings for me.