The Leipzig Project Part One

Years ago I traded my 15mm figures to a fellow club member for his 6mm (actually Heroics and Ros) figures.  Part of that exchange was a large number of Napoleonic figures.   These included figures from almost every army in various stages of painting.  One thing he did when painting them was o use different colors on the bases to help identify units.

I had an Anglo-Allied army, some Prussians and some French that I had been painting for Waterloo.  Combining what I had and what he gave me I found I had almost enough figures to do Leipzig.   At the time I didn't bother to repaint them and went about basing them to see exactly what I had.   After getting them based I determined that I needed some more Cossacks, Austrian Cuirassiers, and some French cavalry.   I also had an excess amount of French guard with bearskins. and others.

Before moving they were used for a few games.   Since then they have been in storage.   This year I finally decided to get them out, fix anything that needed fixing, paint them as needed. and purchase the missing troops.  This is one of the projects that I had listed for this year.   It is also one that I have been dreading due to the amount of work that I expected needed to be done.

The rules I have used organize the armies into brigades.  There are several different rule sets that do this - Volley and Bayonet, Grand Armee, Blucher, and I believe Age of Eagles.   While some of them allow brigades of different strengths I settled on 3000 infantry, 1000 cavalry, and 24 guns.   The infantry and cavalry units are on two 1 1/2 inch square bases and the guns are on one  1 1/2 inch square base.   Nafziger's book on Leipzig provided unit strengths.   In some cases I moved excess men from one corps to another to bring understrength brigades up to full strength.

The first step was to make new labels for all the units.   After making the labels and applying them to the bases, I found that I will need three units of Austrian Cuirassiers, 6 units of Cossacks, a couple of units of French cuirassiers, and maybe some units of Prussian cavalry.   As can be seen from the photos of the Austrian and Prussian armies there is a lot of work to be done.   This includes painting the figure bases to match the artist mat board I use for bases,  adding missing figures, and painting those that need to be finished.   I several boxes of excess figures that I can use to add gun crews, etc.  I am also going to remount the generals on round bases of different sizes and add new labels to them. 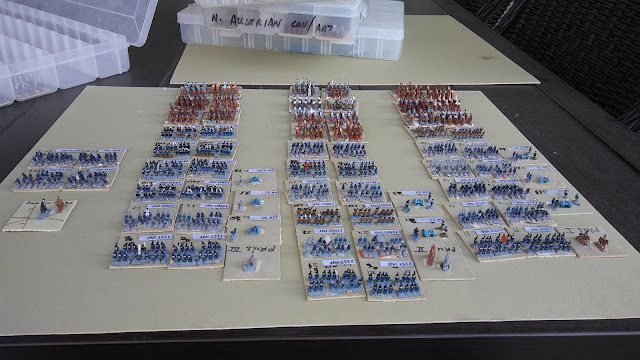 The Prussians.   From left to right army commander and the two guard brigades which were in the Russian Guard Corps for the battle, I Korps, II Korps, III Korps.   The three Prussian corps were each assigned to one of the three major allied armies (Bohemia, Silesia, and North) for the battle.  I also have additional infantry, cavalry, and guns to bring all three Korps up to strength for Waterloo.   In the background are the storage boxes I use.   I got them at a discount and they will work for 15mm or smaller figures on 40mm wide or less bases.  They are about 7 inches by twelve inches and have four compartments that can be divided if need be.  Several different companies make similar sized containers.  They are stackable.   I use them for my American Civil War and ancient armies also. 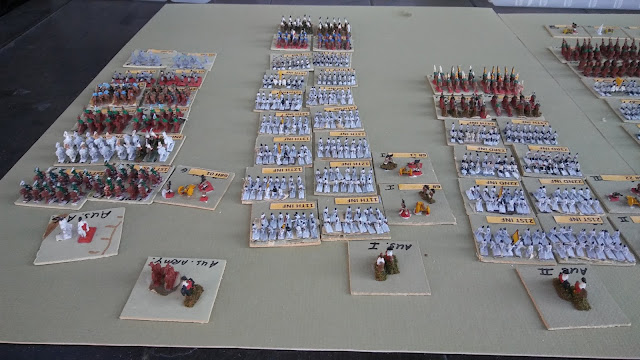 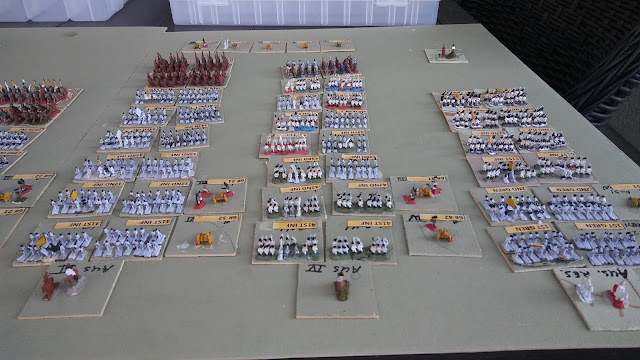 III Armee Korps, IV Armee Korps, Reserve Korps.  Artillery Reserve in back and the commander of the Reserve Cavalry (cuirassiers) in back right.

Posted by William Butler at 9:54 AM