There were two games at the August SMWS meeting.   DBA and a modern armor game I ran using Lightning War - Red Storm.

LWRS is a free set of rules covering WW2 to present day and is available by joining   https://groups.io/g/LWRS

Each element in LWRS represents about 15 vehicles or 150 men.  About a company or a battalion of artillery.  Units are multi-company battalions.  Battalion units are grouped into brigade/regiment formations under a commander.   With several brigades forming a division under a higher level commander.   A player can handle a division.

Units are rated for five levels of quality, and four to five levels of equipment technology.   Rated from a low of 1 to a high of 5.   Formation and division commanders are also rated from 1 to 5 and can have a different rating from the units they command.  With this rating system an early war PZIV would count as a class 4 heavy tank, but by the end of the war it might be only a class 2.

Instead of IGOYGO the game has an interactive activation sequence.   Players roll a die for each formation.  Priority is assigned from the highest score to the lowest.   Starting with the highest score each player can choose to move immediately or pass and wait until later in the turn with the ability to interrupt the sequence at any point.   If all the higher scores pass the lowest scoring formation is forced to move and the sequence is repeated until all formations have moved.   Combat is then resolved with air strikes, followed by artillery, then direct fire and finally close assaults.  Each phase is simultaneous and units can become disordered due to damage in any and all phases.   Morale checks are made for losses or situations and units can become fatigued and whole formations become exhausted ending their offensive capabilities.

For this game the opposing sides were two fictional Latin American countries.   The Peoples' Democratic Republic of La Cucaracha led by El Supremo Jefe Patronis and The Federal Union of Buena Vista ruled by President for Life, Elvis Narcisco.   The PDRC uses Russian equipment and the FUBV uses German equipment.

As a side note, on YouTube there are several videos of Chiles annual military parade.   Chile uses modern German equipment and has kept the Prussian military traditions.   Units in historical Prussian uniforms take part in the parade and Prussian military music is played by the bands.

The game matched the first divisions of both nations in a meeting engagement and lasted a full day of six turns.   Each turn is two hours long.   The FUBV was starting to gain an advantage by the end of the day.   The table was six feet by six feet or 18km by 18km at the game scale of 1cm - 100m.

Below are some photos of the game.  Most are from the north side of the table with the PDRC on the left and the FUBV on the right.   Mike O'Brien took the first two pictures. 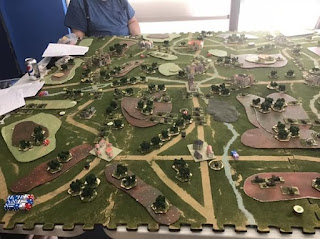 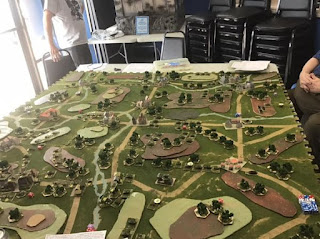 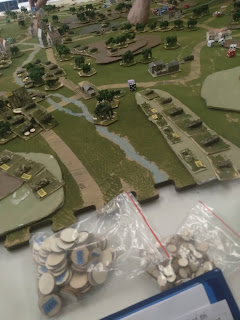 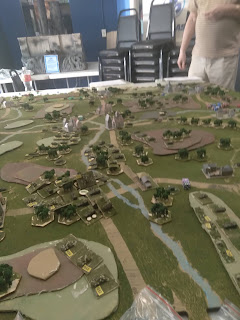 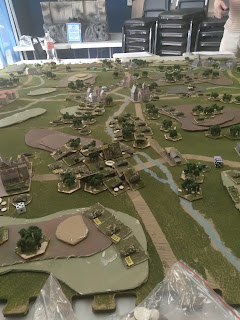 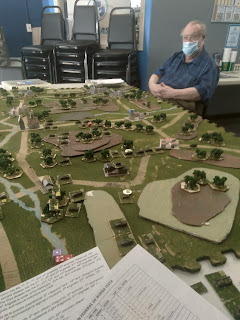 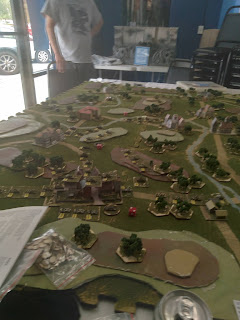 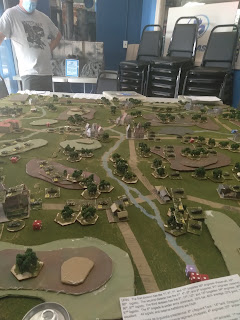 Posted by William Butler at 5:09 PM