Well, I finally got around to writing this blog post about the 2021 Pacificon Game Expo convention.   Due to the Covid virus Pacificon 2020 had been cancelled.  Sadly, attendance was down from 2019.  Several of the local gamers had gone to Enfilade instead this year.  Normally, Enfilade is held on a different weekend from Pacificon, but this year it was held on the same weekend.

The miniature and board games were in the same room again, but the room was smaller than 2019.   The number of games offered was also less than 2019.   I ran two games, one on Saturday morning and the other on Sunday morning.   In all there were about 24 people participating in the miniature games  on Saturday.   My Saturday game was Breitenfeld 1631 using Repent or Die from Hoplite Research.   Sorry no pictures and an inconclusive result.  I left early from the convention after my game to take care of some things at home.

My Sunday game was Blenheim 1704  using slightly modified Rank and File rules.   The result was a French victory.   Afterword I participated in the Panzer Korps WW2 game.   I commanded the Germans with the aid of Keith against the two British players.   Our units started out hidden and visibility was limited due to the Bocage terrain.

The British right flank force arrived first and was immediately thrown back.  After regrouping they again attempted to advance.   Meanwhile my ersatz tank destroyer unit had been sniping at them.

The British left flank force arrived on the second day segment (each day segment is two hours and can have 1-4 turns depending on die rolls).  Their advance was also halted by infantry and our other ersatz tank destroyer unit.   This unit also continued to cause problems for the British left flank for the remainder of the game.   The British never saw it due to attempting to spot the wrong location.   It was further away than where they were looking.

The British also had some offshore naval guns bombarding the area, but this fell on areas where our troops were not deployed..   We had deployed in depth with four infantry (panzergrenadier) battalions up front the two ersatz units behind them, and tank battalion and a nebelwerfer battalion further back.

We also had some anti-aircraft companies that were attached to various units.   The one attached to my ersatz unit caused the British air strike to break off its attack.  Time ran out with the British attack stalled and the Germans still holding all the game area that they had started with.

Below are photos of the Blenheim and Panzer Korps games. 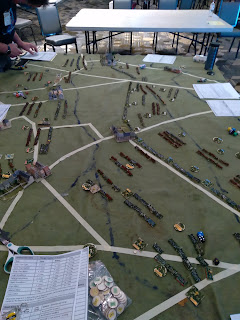 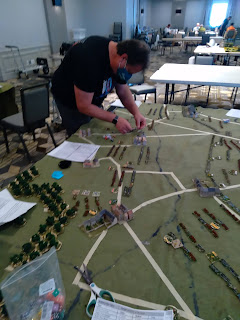 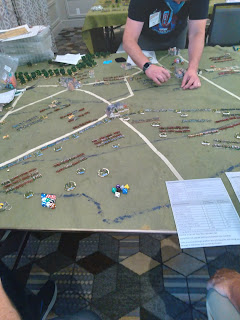 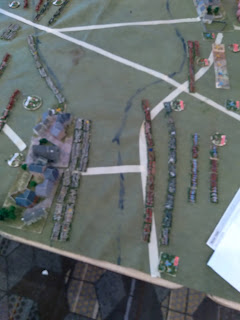 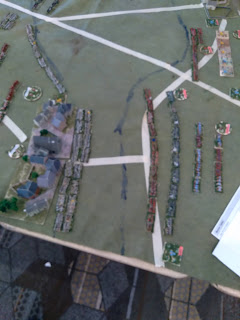 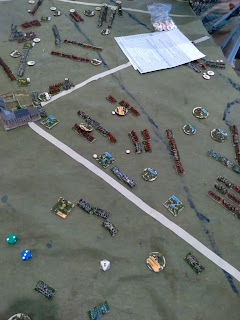 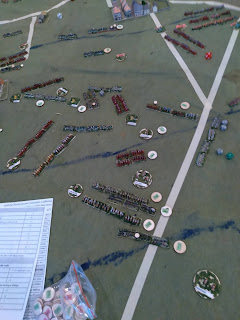 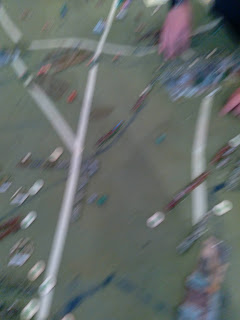 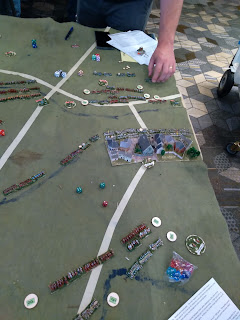 The following are from the Panzer Korps game 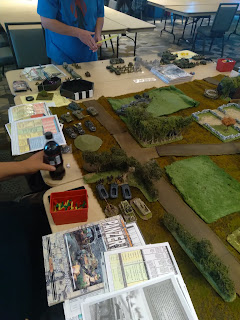 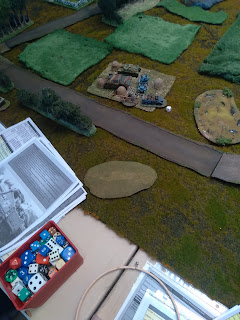 My ersatz battalion in its initial starting position, having been spotted by the British after causing them problems 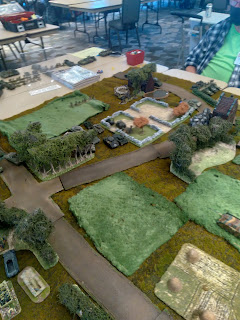 The British regroup and advance again 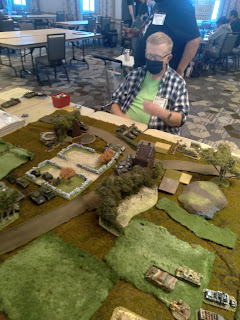 My ersatz battalion had redeployed to avoid British artillery barrages on its original position. 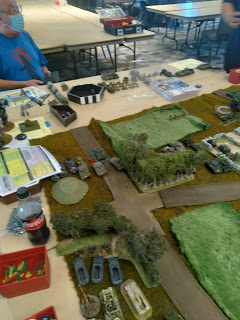 End of game .   British are no further forward than their initial turn.    I forgot to take pictures of the other flank.

Posted by William Butler at 7:47 AM