Once again I commanded a reconnaissance company from Rommel's Panzer division in 1940 playing Fireball Forward.  This time it was an armored car company with a motorcycle infantry platoon.   My objective was to either capture the bridge intact, dispute control of the bridge, or prevent the French from escaping across the river.

I was able to enter from any and all of the roads on my side of the river.   The river was only crossable at the bridge.   The French started in a village on the right end of the table on my side of the river.   Upon assessing the situation, I realized that capturing or disputing control of the bridge would be suicidal so I determined to keep the French from escaping.

On my first move I sent my motorcycle platoon down the center road with the objective of capturing the building closest to the road junction on the other side of the railroad track.  I had an extra initiative chit that I was going to use to accomplish this.   My first two squads came under fire from the Belgian anti-tank guns and had to dismount and fall back, the LMG and the third squad were not affected,   I then used my extra initiative chit and immediately moved the platoon again, getting everyone in the platoon into the building with the lmg and on squad on the second floor and the other two squads on the second floor.

The French had two armored car platoons, a truck borne infantry platoon, and a motorcycle infantry platoon.  The truck infantry ran into the nearest building and the motorcycle infantry moved to the far side of that building.   I then brought my light armored cars in from the two roads on the right losing one from Belgian anti-tank fire.   The others caught the light armored cars from their rear and shot them up.   During the game both sides could score a chance to earn an extra one use initiative chit if they eliminated an armored car or infantry squad.   I was able to get two of them.   The allies did not score any.

I brought my heavy armored cars, mortar and platoon commander on the same road as the motorcycles had arrived on, keeping them out of line of fire from the Belgian AT guns.  Fighting for the town was intense.  I lost two of the light armored cars and a squad of infantry while eliminating the five French armored cars and one of the infantry platoons.   The mortar was very effective causing about 1/3 of the French casualties.  The French were trapped in the town and were not able to escape.

The Belgians had placed explosives on the bridge, but could not detonate it until at least one French unit made it across the bridge.

Other games at the club that day were the Second Punic War battle of Illipa and a a Napoleonics game. 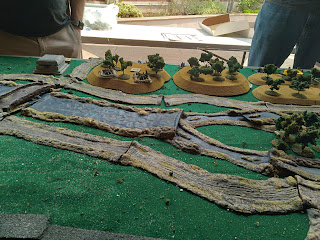 View of the river with the bridge and a bunker on the left. 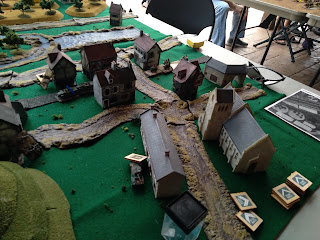 The town the French started in 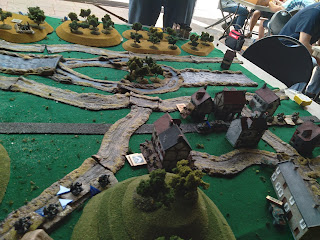 The arrival of my motorcycle infantry.

Posted by William Butler at 4:50 PM