After finishing painting the Seven Years War and Marlborough figures I hosted the Battle of Blenheim 1704 at the South Bay Game Club using modified Rank and File rules.  The rules were altered so that each base represented about 500 infantry 250 cavalry, or 12 guns.   Artillery ranges were halved with musket ranges further reduced.   Movement rates remained the same.   Formation changes and linear obstacles cost 1/4 move instead of half.   Units could pass through each other provided neither was charging or being charged or routing and one of the units remained stationary.

Pete commanded the French, I was the Elector of Bavaria, and Dave was Clerambaut.   The Franco-Bavarian order of battle was as follows.
On the Anglo-Allied side Allen was Marlborough, Dough was his brother, and Robert was Eugene.

The Anglo-Allies were not as aggressive in the center as they were historically, while Pete's French were more so.  The cavalry battle in the center favored the French with Allen having a series of bad die rolls.   Doug's assault on Blenheim was a meat grinder with many drawn melees and brigades being reduced to ineffective strength. 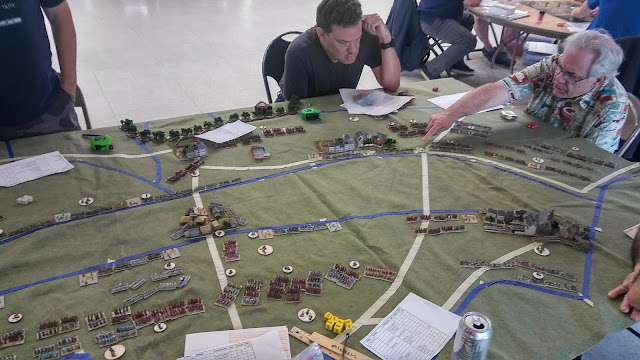 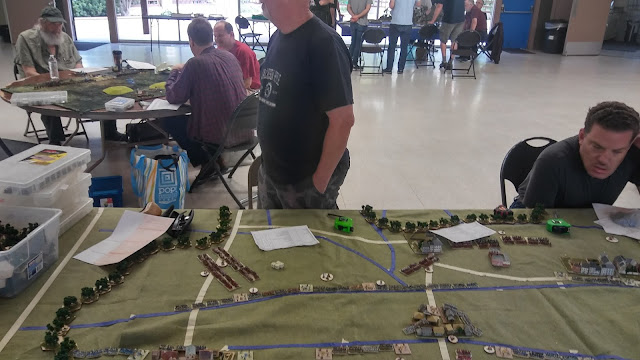 Robert waiting for the attack to begin. 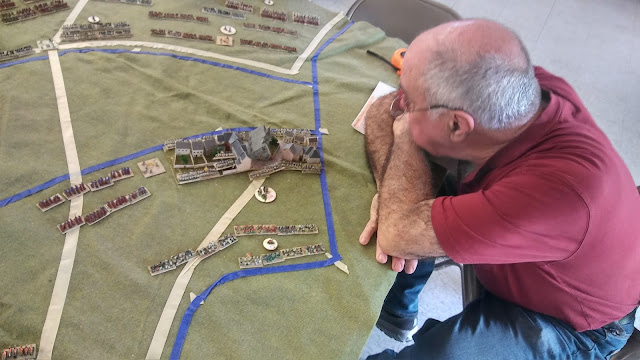 Dave observing the opposing army from his position at Blenheim 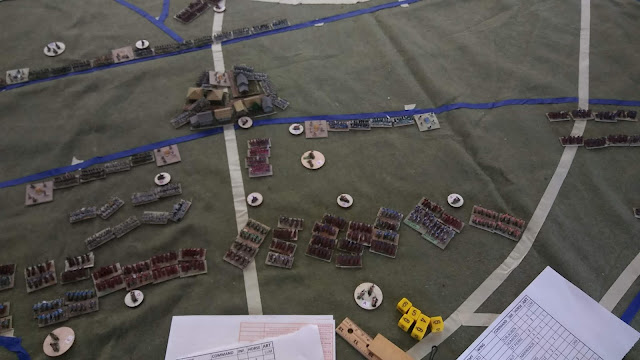 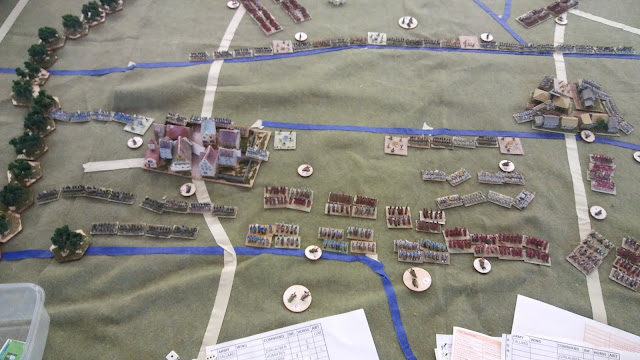 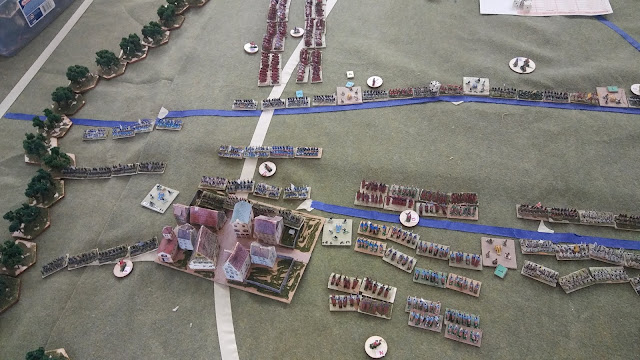 Hoping to take advantage of Eugene's inactivity the Bavarians advance. 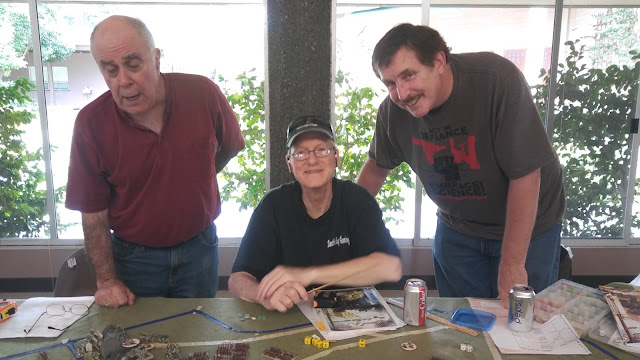 Dave, Pete and Me. 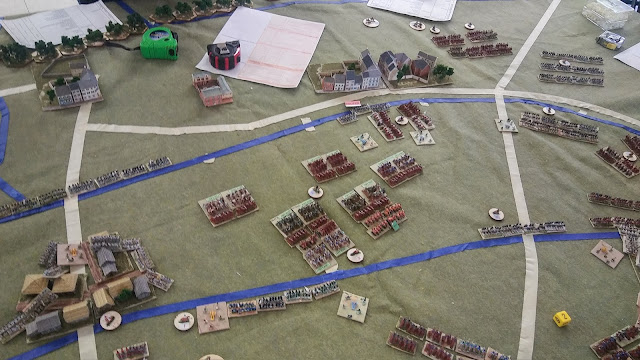 Danish Cavalry (facing down) about to lose fights with French horse. 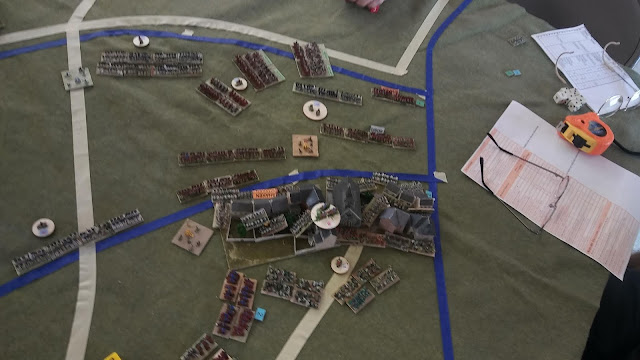 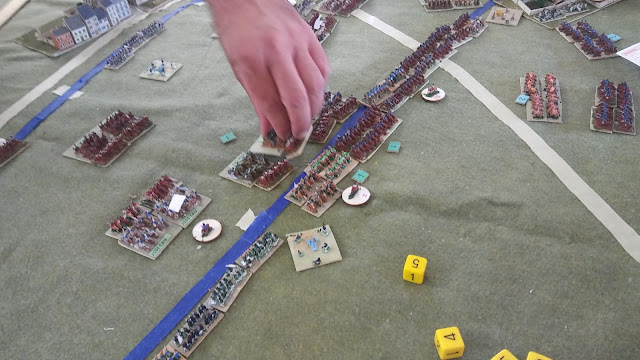 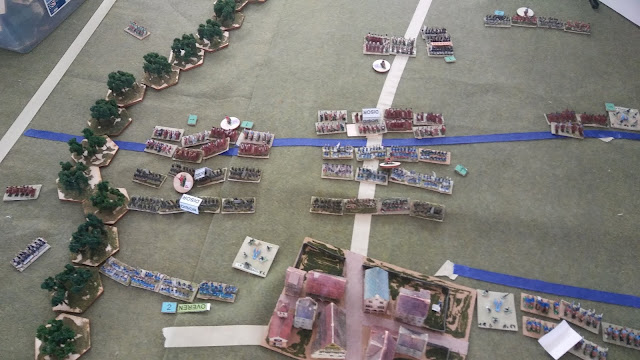 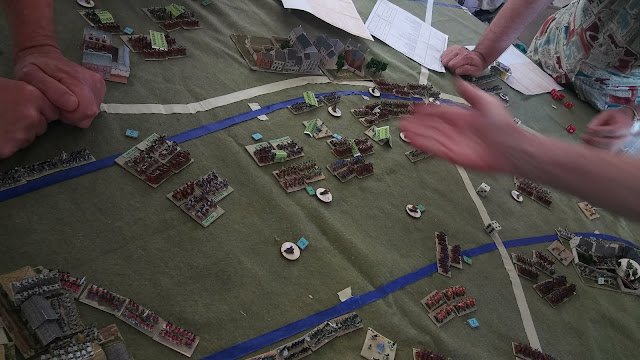 Danish cavalry continues to be pushed back. 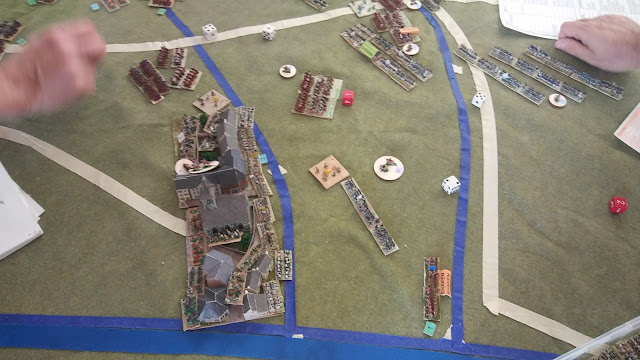 The French repulse the attacks on Blenheim

The final outcome was a victory for the Franco-Bavarians.  All figures are from Heroics and Ros. Buildings are all cardstock and are a mix of Paperterrain, Hard Cover, and others.

Forces are as follows.  The Franco-Bavarians had one veteran cavalry and one veteran infantry brigades in the brigades commanded by Tallard.   The were four veteran infantry brigades on the Anglo-Allied side.   Two of Lumley's cavalry brigades and all five of Wurtemburg-Neuenstad's cavalry brigades on the Anglo  side were the British and Danish cavalry which had a +1 die roll advantage against other cavalry.  L, M, and H under artillery are light, medium, and heavy smoothbore artillery.  There were 64 infantry figures and 48 cavalry per brigade.  (2,368 infantry, 1776 cavalry).  Both armies were almost equal in overall units with the Franco-Bavarians having one more artillery unit.

Posted by William Butler at 6:28 AM