I finished painting the Prussian Army this week.   Items painted this week were 100+ jagers, 336 cavalry, 210 artillery men, 34 artillery pieces, 21 6 horse limber and gun teams, 37 generals and aides, and a few spares.   Additional work to do is printing and attaching flags and flocking the bases.  Next week I will be starting on the French.  The picture below is most of the figures deployed as the Prussian First Army in 1870 with the Guard Corps substituting for one of the infantry corps and one of the two cavalry divisions.   From left to right Guard Corps with two infantry divisions, corps artillery, and one cavalry division.  The other two corps are the standard Prussian infantry corps of two infantry divisions, two cavalry regiments, a jager battalion, and corps artillery.   The Cavalry division has two cuirassier regiments, four uhlan regiments, and one artillery battery. 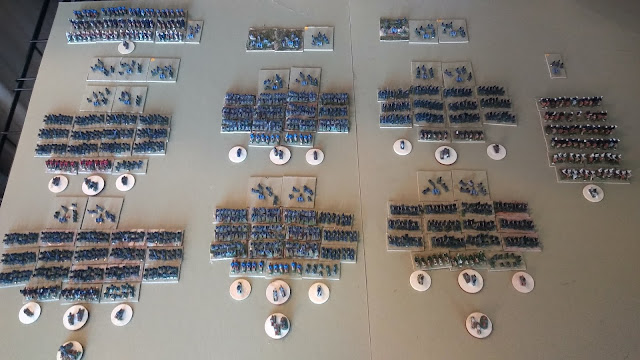 Posted by William Butler at 6:17 PM