I had previously done a bit of Franco-Prussian War gaming with They Died For Glory and Nach Paris.   Recently the South Bay Game Club had a game using Bruce Weigle's 1871 rules.  This inspired me to get my old figures out and see what I had.  Realizing that I didn't even have enough for two divisions on either  side I placed an order with Heroics and Ros to increase the French to 10 infantry and three to four cavalry divisions.   The Prussians would be increased to a full corps for the Bavarians and three "Prussian" corps along with two to three cavalry divisions.

My order arrived on Friday, August 9th.  The South Bay Game Club meeting was on the 10th.   On the 11th I got everything primed and started painting on Monday.  By Friday I had finished the Bavarian infantry and cavalry and all the Prussian infantry except for the Jagers.

I took a break from painting over the weekend to take care of other things and for the Miniature Wargaming Society of Sacramento's meeting.   Painting will resume this week with the Prussian Jagers, cavalry, and artillery on the schedule.   Total figures painted so far are 56 Bavarian artillerists and 9 guns, 11 Bavarian commanders, 300+ Bavarian infantry, 84 Bavarian cavalry, and about 1000 Prussian infantry.

The Bavarians.   Bavaria fielded two corps in 1870.  They were similar to the Prussian corps, but had more cavalry and artillery and replaced some line infantry with jagers.   The first corps had the two cuirassier regiments and the second corps had the two uhlan regiments.   I painted both so that either corps could be fielded.   Each corps had two infantry divisions, a cavalry brigade (cuirassier or uhlans with a light cavalry regiment), a jager battalion, and the corps artillery.  The wider stands represent two batteries and the narrower ones a single battery.  The divisions had a cavalry regiment, the divisional artillery, and two brigades of two regiments each with three battalions.  One battalion of each brigade was replaced with a jager battalion.  In the picture below the two infantry divisions are on the right, the cavalry brigade is at the bottom left with the uhlans below the cuirassiers, and the corps artillery and jager battalion in the upper left..  Generals are on circular bases. 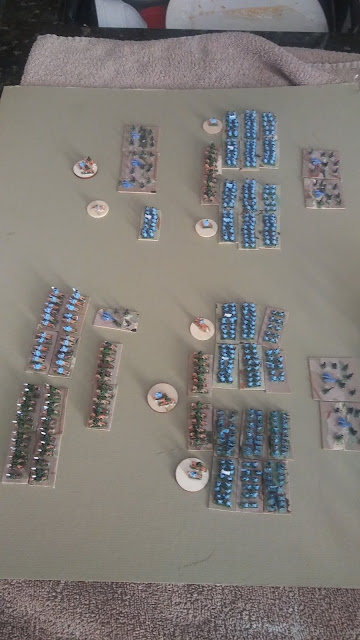 Prussian infantry.   I had intended to have 26 infantry regiments, but due to more extra figures per pack than I had anticipated I ended up with 29 regiments.   Each regiment has 48 figures.   Each infantry pack has 53 figures and some had an additional strip of 5 figures.. 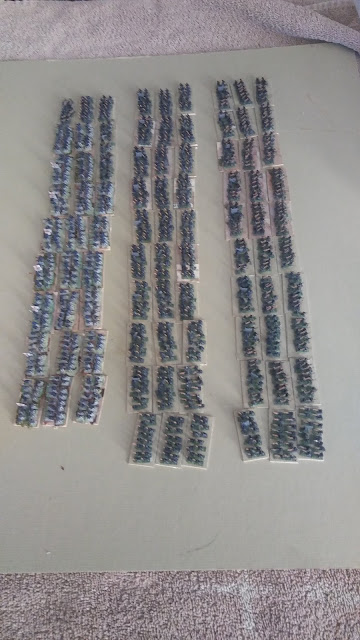 I still need to print flags and flock the bases.  The Prussian regiments in the left column have flags.

Posted by William Butler at 5:54 AM