Since the last post I have been painting more Seven Years Wars/Marlborough Heroics and Ros figures.   Several months back I got a good deal on some Marlborough range figures.   About half the cost of retail.   They have been sitting in the box waiting to be painted since then.

At the July Sacramento club meeting we played an Imaginations game of Rank and File.   Mike had purchased a lot of 20mm plastic lace wars figures and wanted to use them.  The battle was a rear guard action between the armies of the Principality of Itter and the Dukedom of Huntingdon.    I commanded the pursuing forces of the  Principality of Itter.   Aaron commanded two of the cavalry regiments on the right flank, while Hal had the third one and the grenadiers next to him.  My plan was to pin their center and attempt to move around their right flank with the four infantry battalions and light gun.  Hal was to keep their left center occupied and Aaron would smash through their left flank cavalry. 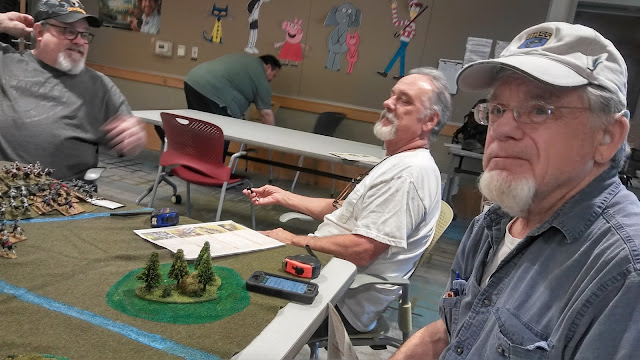 Hal on the right and Aaron in back. 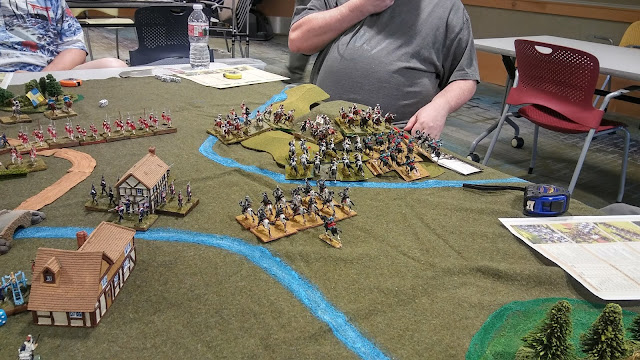 Aaron's cavalry slams into the enemy's lead regiment on the hill 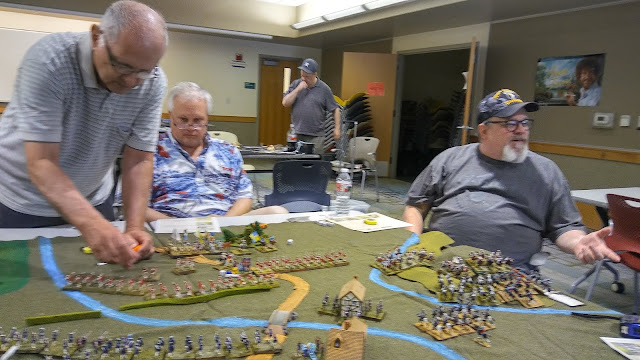 The Huntingdon infantry takes up position behind the hedgerow. 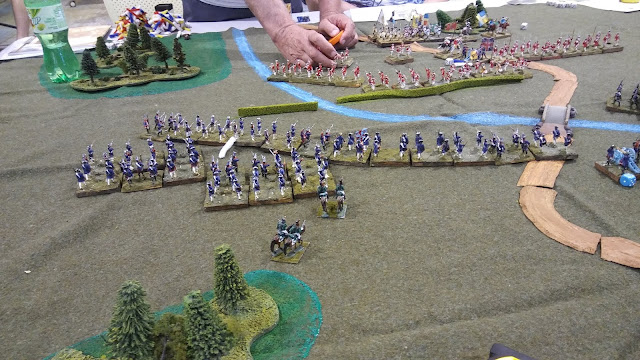 My two lead battalions attempt to pin the enemy as the other two move towards the left.

Mike took over for 'Hal when he had to leave early and drove the Huntingdon infantry that was supporting the enemy's left wing cavalry back. 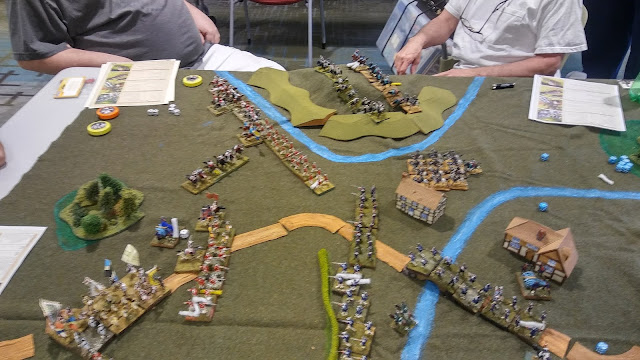 My troops have driven the enemy back from the hedgerow.  Mike and Aaron are attempting to drive the opposing forces back from the stream.

I had been keeping most of the opposing infantry and their light gun busy as I attempted to outflank them.   My initial advance on their center had met with mixed results.    I had driven them back and was later able to eliminate the gun crew, but each time I got close casualties would cause a morale check causing one of my infantry units to fall back.  They were able to recover and resume the advance, but were never able to launch a successful attack. 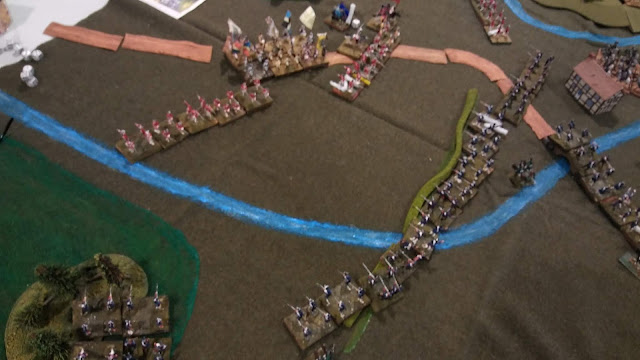 While one of my battalions from the second line continues to move through the woods to outflank the opposing infantry the other has formed up in on the left of the first line.  The other first line battalion is in road column and is moving to to help support the attack on our right after it had been forced back by a morale failure.. 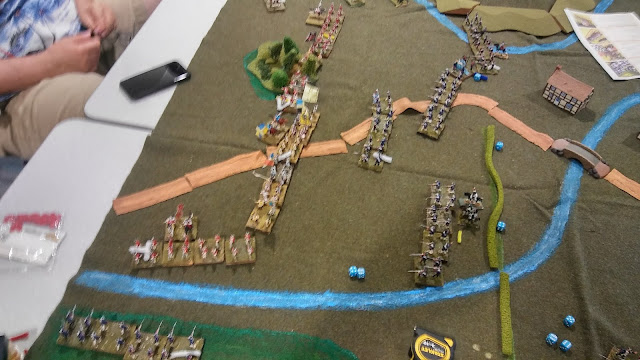 Dave has countered my flanking move helping to weaken his center of one full strength battalion and one weak battalion facing my three infantry battalions and the light gun. 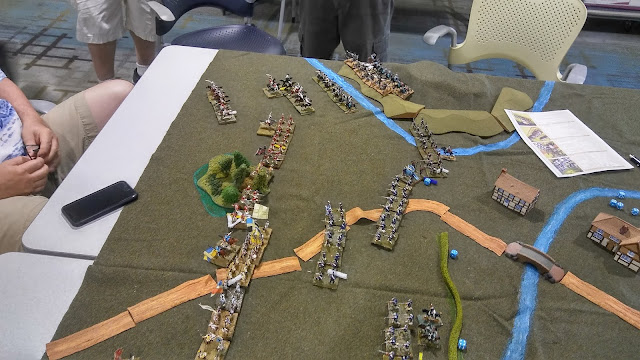 Close to the end of the game.  Mike has driven back the supporting infantry and the opposing cavalry is falling back.  Aaron would soon launch his next cavalry charge which would leave the left flank too weak to stop him from sweeping into the rear and flank of their center.

By the end of the game only one of their four infantry units was still in good shape.   The others had been worn down along with their cavalry.   The game was declared a tactical victory for our side as our opponents were too weak to block our advance.

I enjoyed the game and it inspired me to finish the rest of my lace wars figures so that I can do the Battle of Blenheim 1704 at the August club meeting.  I had originally planned on using the order of battle in the scenario from the Volley and Bayonet web page.   However, I had found two additional orders of battle.  One from Age of Honour and one on the internet at Blenheim 1704   These other two were fairly close to each other as far as commands and organization.   The one from Age of Honour has too many men on both sides if the scale for the scenario is used.  I decided to use the one from the website.

Comparing that to what I had already painted resulted in painting more infantry and cavalry.   Fortunately I still had enough left to paint.   Since my last blog post I have painted the 24 guns and crews that I had originally planned on, the fifty generals and aids, and 120 infantry.    The additional cavalry was another 144 figures to go with the other 100 that I had already painted.   Total forces needed for Blenheim are 46 generals and aides, 15 guns and crews, 1756 cavalry,  and  2,344 infantry.

I have modified the rank and file rules to reflect the size of this battle.   The rules as written usually have multiple stands per a battalion, but do mention altering the scales for larger engagements.   For this battle all artillery ranges will be halved.   musket fire will be one inch close range and two inches long range.   Movement rates were kept the same, but formation changes and crossing linear obstacles will only take one-fourth of a move instead of half.   The separation distance prior to completing a charge move is reduced from two inches to one inch.  All infantry stands will represent about a 500 man battalion, each cavalry stand will represent 250 men and horses, and artillery stands will represent 12 guns.   All cavalry and infantry units will consist of four stands.  Officers will represent the two army commanders each side had, wing commanders, and "division" commanders.