Catching up on the past few months

The past couple of months have been a bit busy.   I am finally getting around to posting on the blog.   There was a Laser and the Flame game at the South Bay game Club, a What a Tanker Game at the Miniature Wargaming Society of Sacramento, and an All Quiet on the Martian Front game at Fresno..

I was on the Russian side for the What a Tanker game.   My T34 took out a couple of German tanks before being destroyed.   I then received an ISU152.   It had a very powerful gun in the rules, but unfortunately my die rolling was horrible and I couldn't cause enough damage to the Tiger I.  We traded shots at short range for several turns with the Tiger making almost all the saving throws, before finally causing enough damage to destroy the ISU. 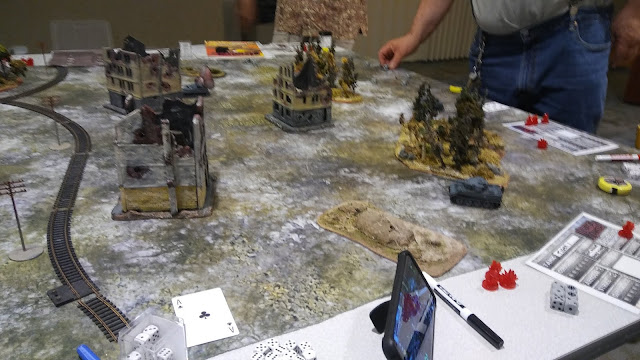 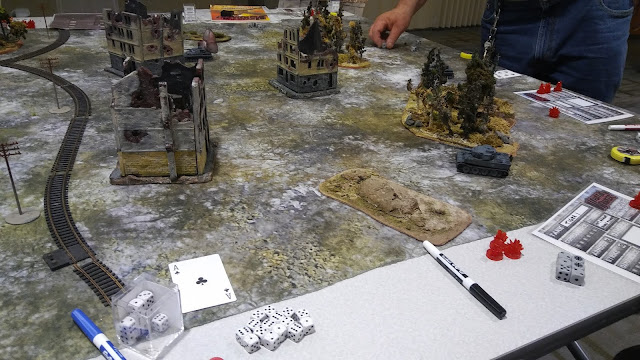 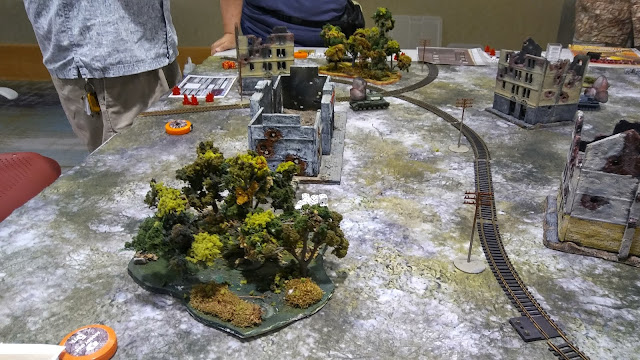 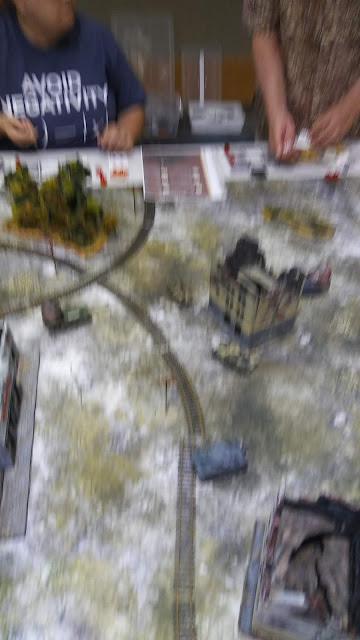 The Laser and the Flame game is a variant of the Sword and the Flame/  The [players had to recover control of the spaceship before it crashed into the home world.   The ship was infested with creatures that we had to eliminate as we worked our way through the ship trying to get to the bridge to regain control.   We captured the bridge only to find out that the power was off leaving us no choice but to work our way to engineering at the other end of the ship.   We were able to restore power and control by the final turn.   We each started with ten cyborgs.  Three of us were down to two at the end and the fourth player had four left. 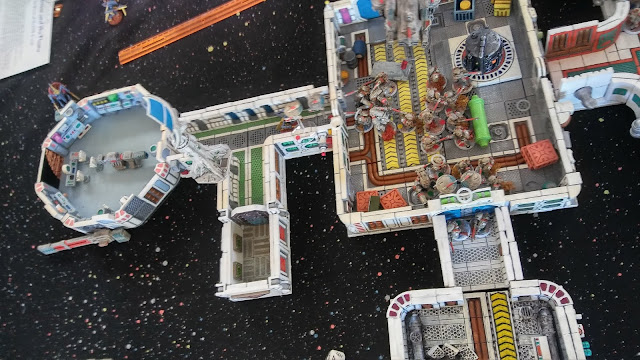 Forward part of the ship.  Bridge on left, then computer room then main flight deck, and medical bay at bottom right. 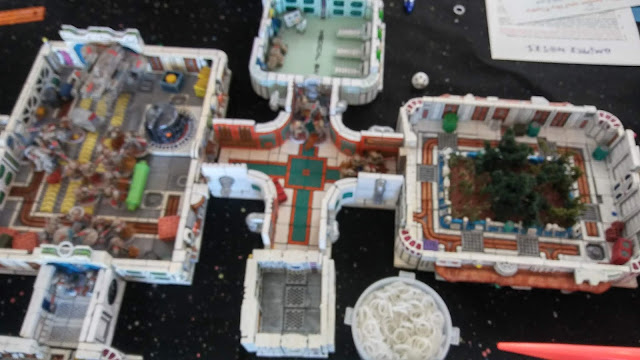 Middle of the ship.  Flight deck on left, airlock at bottom, crew quarters at top, and hydroponics on the right. 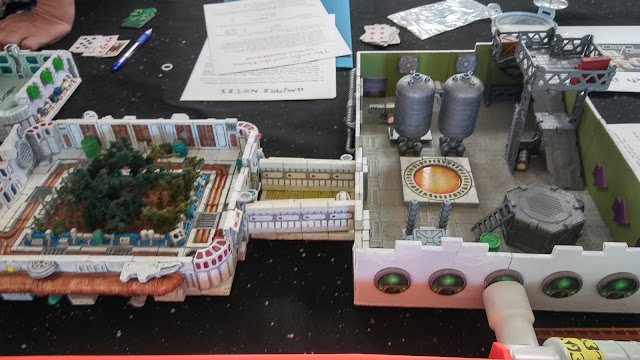 Engineering room on the right.   We finally found the disconnected plug to the power supply after a hard fight and regained control of the ship.

For the Fresno Game I commanded an American battalion of two tank companies and an armored infantry company with an attached Hellcat platoon.   Our mission was to drive the Germans out of the town.   The Germans were caught in the middle when the Martian Tripods started attacking from their rear and flank.  By the end of the game the Germans had been wiped out.   They destroyed five of the eighteen tripods in exchange.   Our battalion had made it to the river when I ordered a halt and had us seek cover and go hull down.   It took the entire fire power of each tank company to kill a tripod.   Ron's company got one and I got another.   We also knocked out one with an airstrike and another with an artillery barrage.   At this point the game was called with the Martians having to regroup in the town.   We destroyed one more as they fell back  This allowed us to withdraw after losing the anti-tank gun platoon, some infantry and half a dozen tanks.   Final score was five kills each for the Germans and the Americans with the Martians in control of the battlefield. 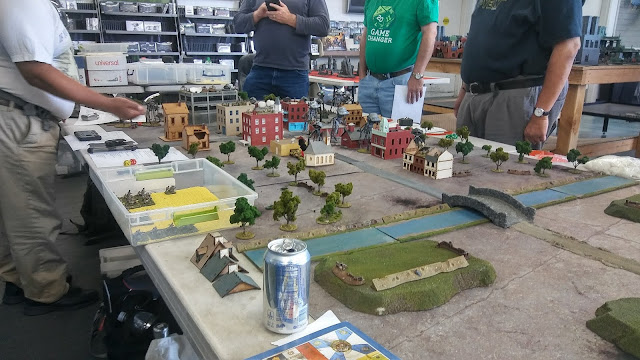 The town we had to capture. 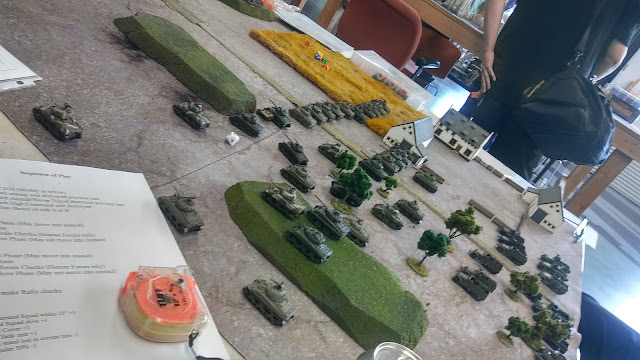 Our forces arrive.   Ron on the right flank, me on the left and Jesse following with the infantry company. 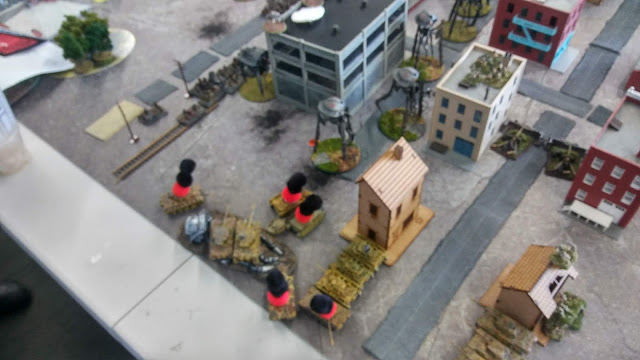 Tripods rampaging through the town.   The German tanks got too close to a Tripod when they destroyed it and lost five of their tanks in the explosion.


I have also painted some of my 28mm Scifi and fantasy figures.   The Scifi infantry are from Khurasan miniatures and will be Domain regular infantry.   The fantasy cavalry will be for the Dark One's army. 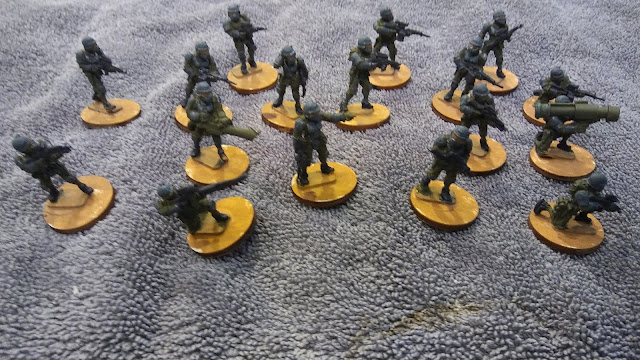 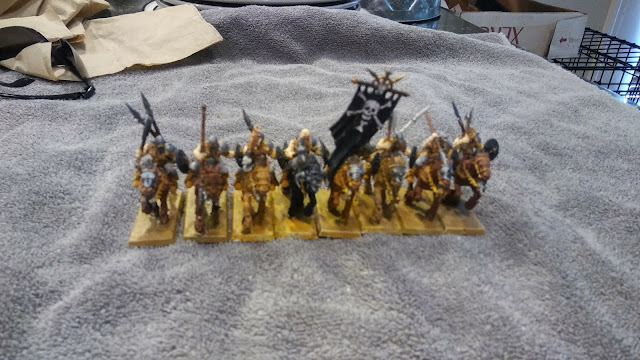 I have also finished painting and basing the 6mm Seven Years War cavalry and I am in the process of finishing the artillery and generals.   When the Heroics and Ros order arrives I will be able to finish the infantry by adding the last few grenadier units.  After that I am going to be painting a batch of Heroics and Ros 8mm Franco-Prussian War figures.

The following is from a set of Corps level army rules 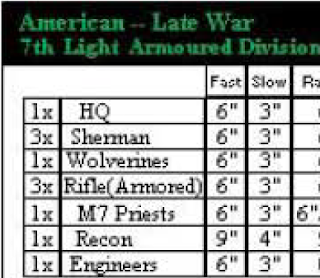 Posted by William Butler at 7:31 PM