Having assembled enough ships I decided to run the Battle of Chios 201BC at the Miniature Wargaming Society of Sacramento meeting.   Phillip V of Macedonian had been forced to retreat from the siege he was conducting and was intending to flee to the island of Samos.  The combined fleets of Rhodes and Pergamon caught him and brought his fleet to battle near the island of Chios.  Polybius is the main source for the battle.   Phillip lost about half of the lembis and 28 of his larger ships.  The allied fleets lost seven ships.   There were two events of note during the battle.  One was Phillip's flagship accidently ramming one of his own ships when it crossed his path, getting stuck, and then being sunk by two opposing ships.   The other was Attalus flag ship running aground and being captured by Phillip along with the treasure on board.

I used the order of battle from the War Galley scenario converted to 1:1 scale except for the Lembi's in the Macedonian fleet.  As I only had 60 small ships they were scaled at 1:2.5 for the 150 Lembi's in the Macedonian fleet.  This gave Rhodes and Pergamon thirty-three "5's" each along with nine "3's" for Rhodes and three "3's" for Pergamon.   The Rhodian fleet was rated as well-trained giving them slightly more movement and a +1 for ramming.   The other fleets were rated as average.   The Macedonian fleet had three "10's", four "8's", five "7's", three "6's", eighteen "5's", eighteen "4's", three "3's", and sixty Lembi's representing the 150 Lembis that were present.  I also added a couple of  extra ships.  Rhodes got a "9"  and Macedonia got the "Katastrofea Ploion" a "12".   I may purchase a Navwar "16" and name it "Astro Thanatou".

The rules that were used were The Society of Ancient's version of "Corvus" with some modifications which I will cover later.  Mike O'brien commanded the Pergamon fleet, while Gary commanded the Rhodian fleet with Aaron as his subordinate.  Dave commanded the Macedonian fleet.  Both sides were allowed to deploy as they wished with the restriction that Rhodes was on the right and Pergamon on the left.

During the battle both sides conducted missile fire causing a few casualties.  The Lembis were considered to be destroyed if they suffered any casualties from missile fire or were rammed.  Both sides also attempted oar shears with mixed results.  There were quite a few ramming attempts.  A couple of times the rammers sank.   The Rhodians engaged in a few boarding actions and captured two Macedonian ships, one of which was rammed and wrecked by another Macedonian ship.  The Macedonians did capture a Rhodian ship.   Following the initial contact the fleets no longer maintained ordered lines and the ships sought individual targets.  I did not keep track of the number of turns that the game lasted, but after setup and explaining the rules it lasted a little over four hours.   The fleets spent three turns approaching each other before engaging in combat.   After several rounds of combat Macedonian losses exceeded their morale threshold and they fled.   The Macedonian right flank almost broke the Pergamon fleet which would have won the game for them.   The allies lost more ships than happened historically while the Macedonians had about the lost more lembis and fewer large ships.

Photos of the battle follow.  Though they are hard to see in the photos the Rhodian fleet had red markings, Pergamon green, Macedonia blue and grey with ship sizes on their bases. 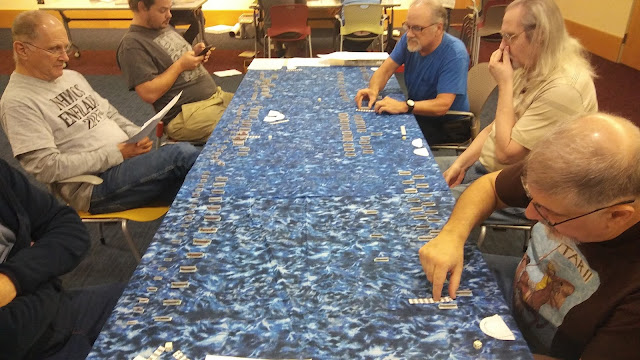 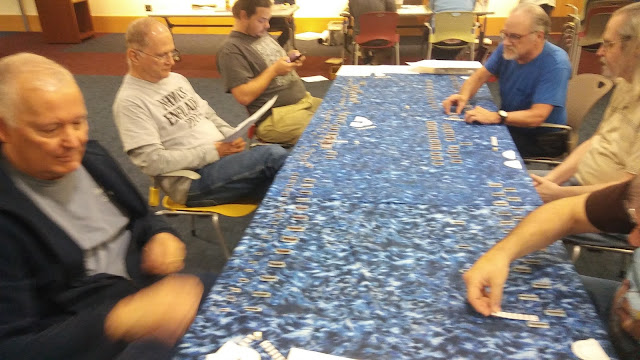 First turn  On the left from front to back Mike W., Dave R. (the Macedonian admiral). 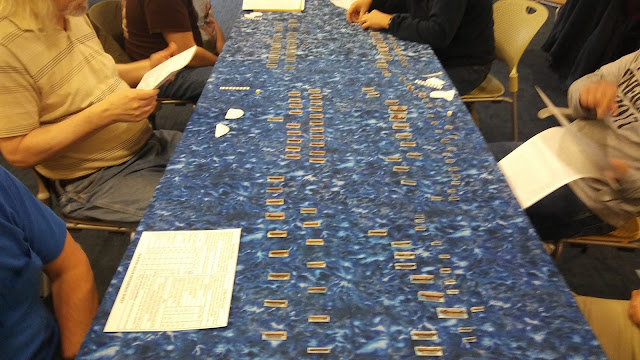 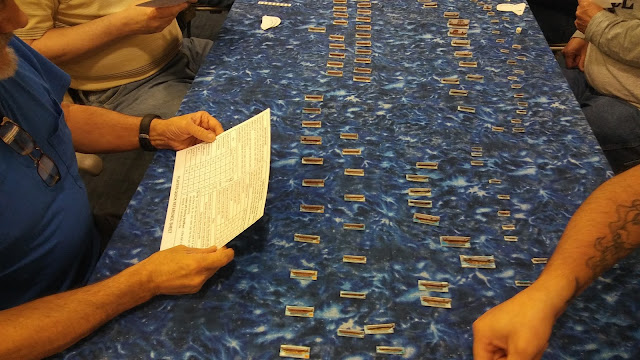 from the other end. 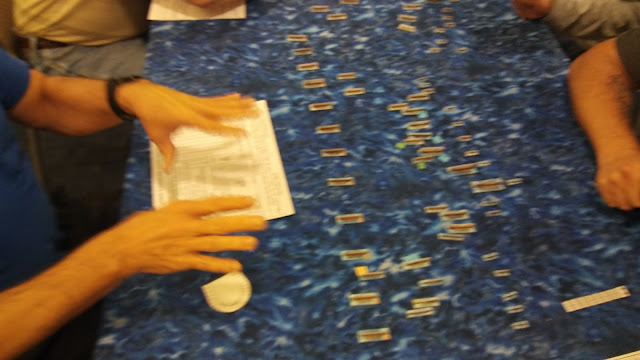 Initial contact as Aaron attempts oar shears.  Aaron was plaqued by bad die rolls for most of the game 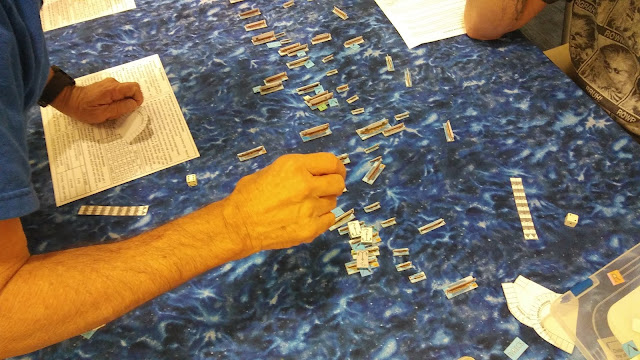 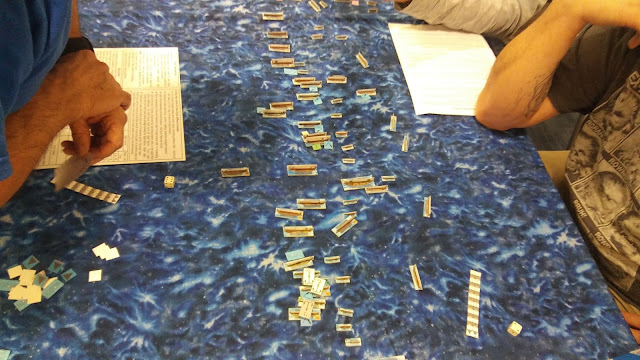 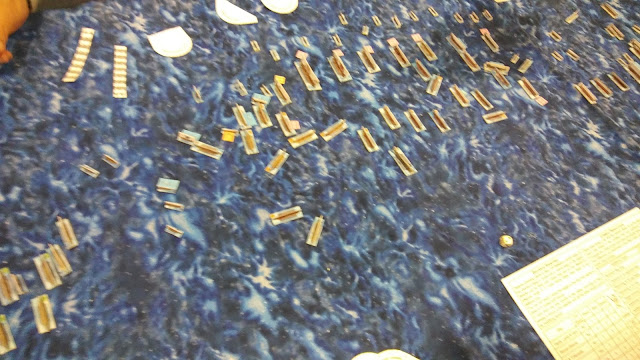 Action in the center.  Macedonian flag ship at top center.  Rhodian ship near top right about to be rammed by four Macedonian ships.  Macedonian Lembis sneaking into the rear of the allied fleets in the gap between the two. 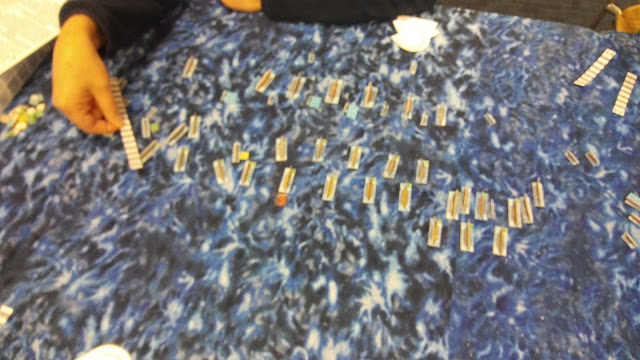 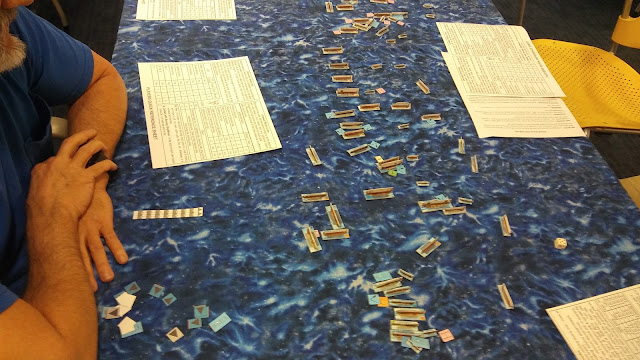 Battle devolves into a free-for -all  Allied right flank 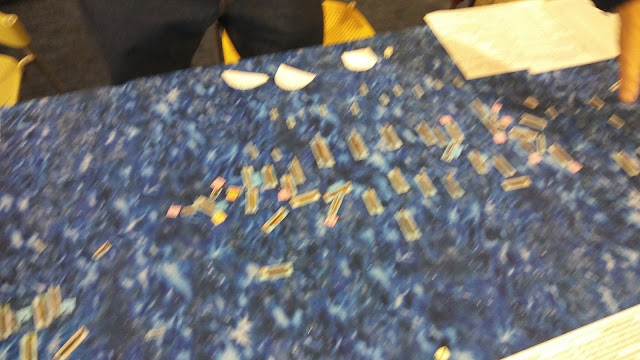 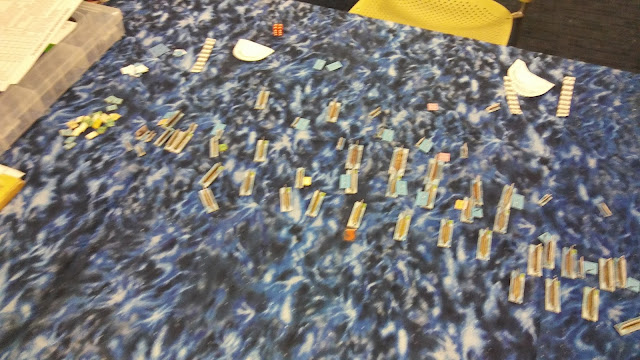 Pergamon flank maintains order as they opposing sides were the last to engage in combat. 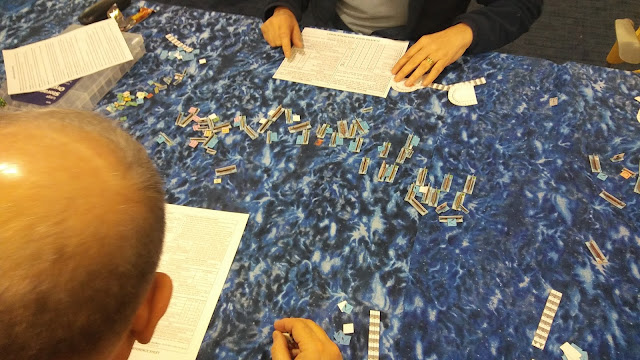 Then the fleets engage. 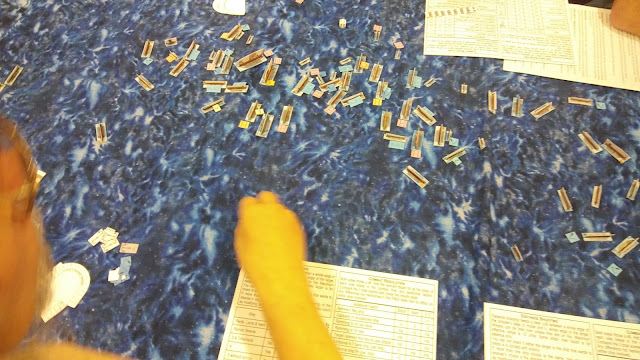 chaos on the Pergamon flank as combat continues 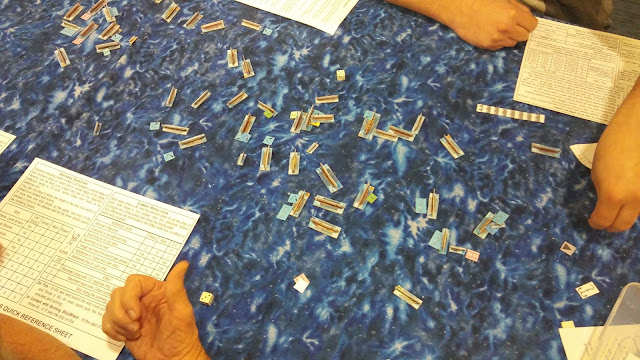 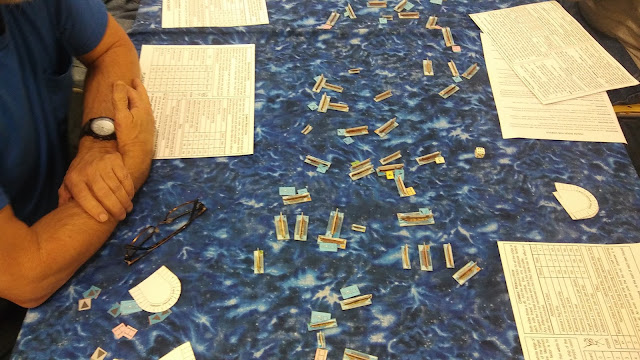 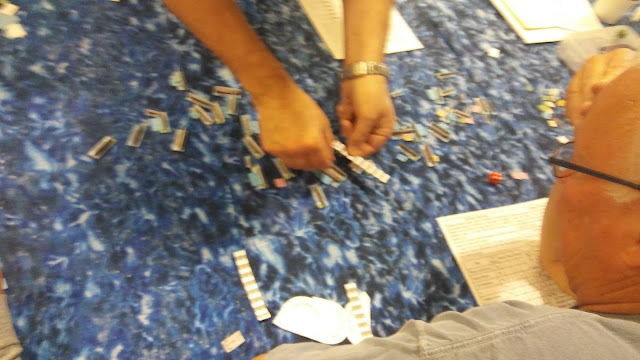 view from behind Macedonian center 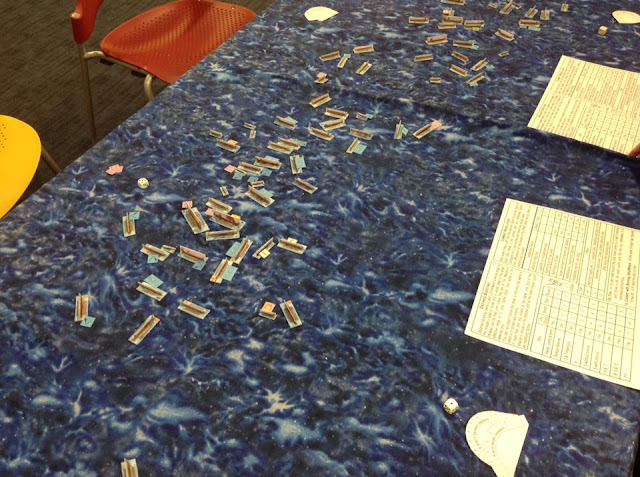 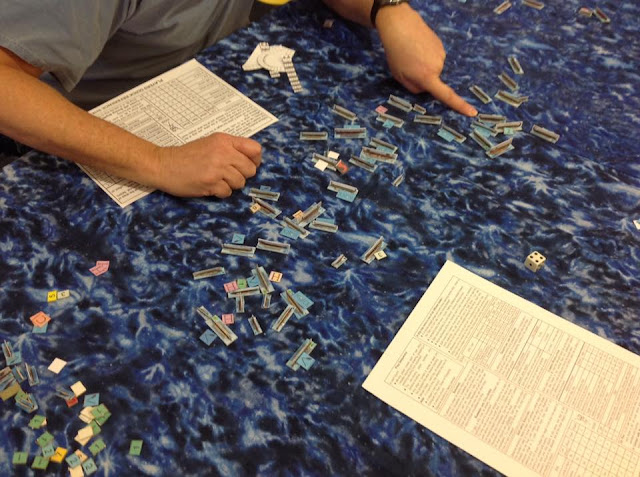 end of game Pergamon flank Rectangular blue markers are wrecks, square blue markers are crippled, H and white are temporary halt markers.  Small counters with numbers indicate ships that have taken missile casualties and their current boarding factor.  Original single-sided reference sheet at bottom right.  Ship with red and black marker at rear near the center of the photo is the Pergamon flag ship. 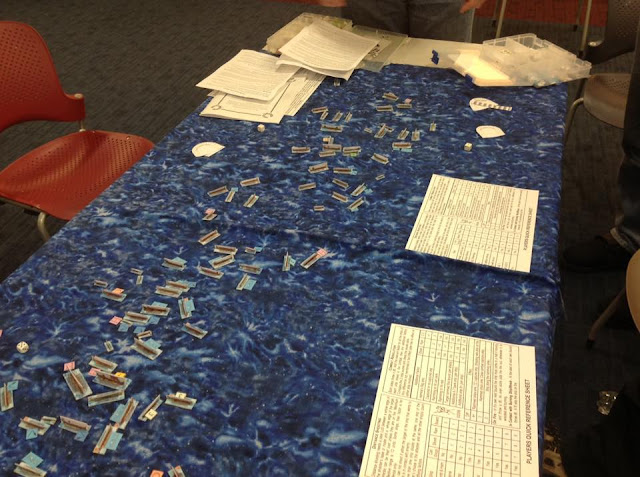 end of game center and Rhodian flank  I used the graphics program to divide the reference chart into two parts and enlarged it to fit on two sides of the paper.  I also made half-sized turning templates from the larger scale turning templates instead of using the smaller turning templates that came with the rules.

The table cover is the back side of the space cloth I had purchased from JOANN Fabrics.  I was going to use it to photograph some spaceships and noticed that the back side looked like water, so I no longer needed to purchase an ocean table cover.
I used my computer to reduce the full size 1:600 turn and movement aids to half size instead of the included smaller turning and movement aids.   This allowed the more agile triremes to make an attack and turning maneuver they were capable of as mentioned in a previous blog post.


HOUSE RULES FOR CORVUS
INITIATIVE – At the beginning of each turn after the first both players roll one die.  High score has choice of which side moves first or second that turn.  If the dice are equal, the side which did not have the choice on the previous turn gets to choose which side moves first or second for the turn.  Helps to avoid the tendency to stand off facing each other
SHIP SPACING – Ancient ships did not deploy oar-to-oar.  They usually kept far enough apart to avoid entangling their oars.   Though not mentioned in the rules, ships must keep about ½ unit  apart.  If friendly ships make side to side contact treat it as a collision per the rules.
MOVEMENT – A ship that is not crippled and is halted may pivot in place and face any direction.  Crippled ships may only pivot up to 90 degrees.   Ships that have rammed another must back up on the following turn to disengage their ram.
RAMMING – Change rule from having to move straight 4 units to ram to 2 units to ram.  This matches the movement chart.
DISTANCE SHOOTING – While ships sometimes used fire weapons for shooting, most of the time they did not.   Engines could shoot large bolts capable of piercing four inches of wood or stone/concrete balls weighing ten pounds (think cannonball).  If a hit is scored reduce the close combat factor by one.  Also, use the shooting factor for the class of ship with the equivalent of the reduced close combat factor.  For a close combat factor of 5 the shooting factor is 4.
FIRE WEAPONS – If shooting fire missiles the range is halved.  If equipped with fire pots and the ship rams an opposing ship the fire pots may be dropped.  For missile fire the missile hits as it normally does.  Roll again and on an odd roll the target ship catches fire.  For fire pots the target ship catches fire on an odd roll also.
CREW QUALITY – (Optional) Well- trained crews cost 1 point extra and add 0.5 units to movement rate.   Poor crews cost one point less and deduct 0.5 units from movement rate.
Other possible modifiers:
Ramming – Better quality crew than opponent add +1 to ram modifier.                                                    Oar Shear – Crew quality two levels higher than target also shear on a 5.   Crew quality two levels lower than target only shear on 4 or 6.
One additional note.  We copied the 1/600 movement and turning aids and reduced them to half size for the 1/1200 ships instead of using the 1cm in place of an inch.