I have completed one of the projects I set for 2018.   Once I had received the 1/1200 ship counters from Tiny Tin Troops I set to work with the graphics program to reduce the images I found on the internet and those I had from the Roman Seas ship sets.   I had previously seen someone reduce the Roman Seas ships to 1/650 scale on the Miniatures Page Galley forum.   While they looked good trying to do 3 dimensional ships in 1/1200 would have been extremely difficult.   My original intent was to reduce them to fit on the counters and use the oars as a stabilizers.   I did do one ship that way and found that I did not need to use the oars to stabilize the ship images.   This saved a lot of time and I was able to complete everything in about a week.   The following are pictures of the different fleets that ate made by Tiny Tin Troops.   Three of the sets are for actual battles while the other three consist of two sets for the 1st Punic War and one for Greeks vs Persians. 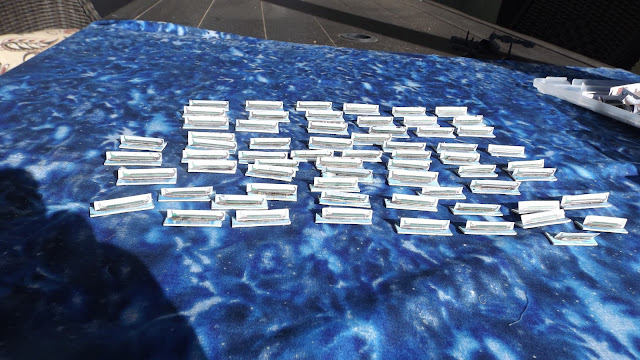 The combined Carthaginian fleets from the two Punic War sets.  Triremes in the back, fives in the middle and fours in the front.  63 ships in all 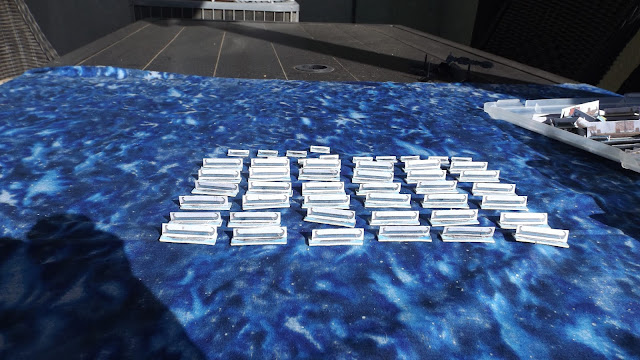 The Persian fleet  36 triremes and 12 pentakonters.   The Greek fleet has the same number of ships. 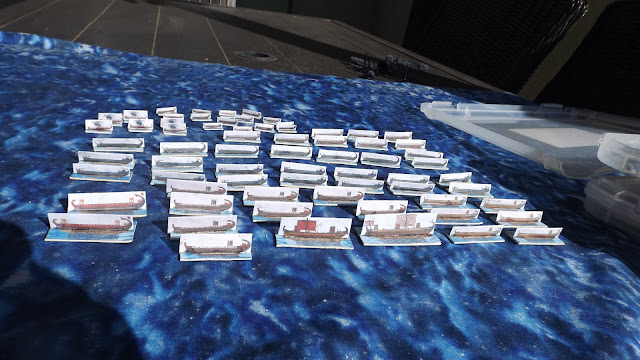 The combined Macedonian fleet.   This has ships from the battles of Chios and Cypriot Salamias.   The large ship in the front is a 12.  The one with the red sail is a 10.   The rest of the fleet ranges from 8's on down to Lembis.  67 ships total.  While there is no recorded instance of a 12 being used in combat there are records of larger ships ranging up to 16 and 20 that were capable of combat.  The ships with the sails in the background are Hemiolas. 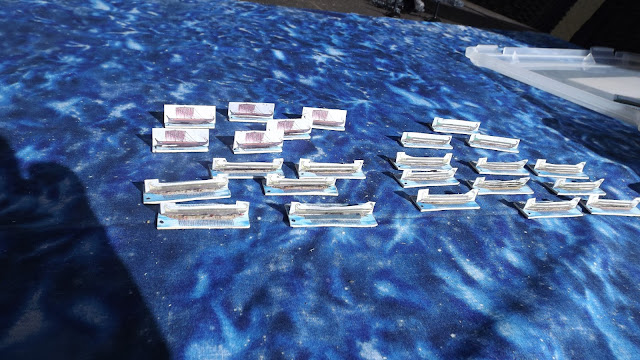 The fleet for Rhodes and Pergamum.  This has a 9 and some 7's and 6's that are not recorded as being at the battle of Chios or used by either of the two kingdoms, though they do allow for some interesting what ifs.  The ones with the sails are Triemiolas.  This is the smallest fleet with 24 ships.  I may transfer the ships larger than a five to the Macedonian fleet 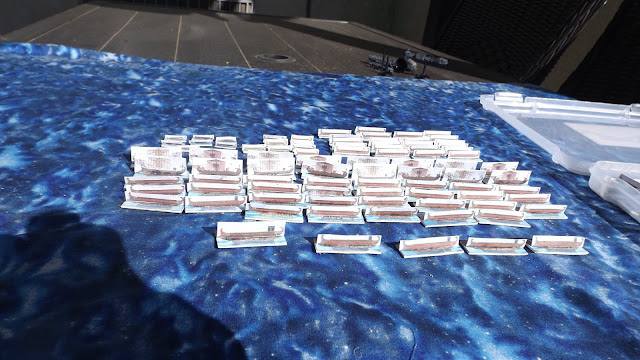 The combined Roman fleet.  This is the two Punic wars sets and the Actium set.  Thee is a seven and some sixes in the front, then 5's with another 6 mixed in, 4's, triremes, Liburnians, and Lembis.  Those with the flags are the 5's with the corvus.   88 ships 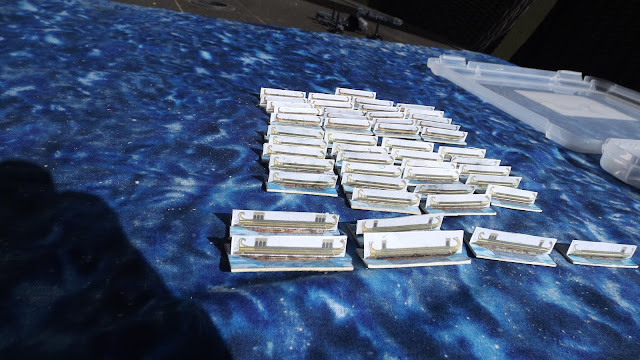 Finally the combined Ptolemy fleets from Cypriot Salamias and Actium.  From left to right in front two 10's, two 8's, a 9, and a 6.   Behind them are fives and fours with nothing smaller.   49 ships

The total number of ships is 386 which is probably the same amount in British pounds that I would have to pay for ships and postage if I ordered from Navwar.

Since my previous post on Ancient naval rules I have been sent several sets and notified of others that I did not mention in previous posts.   These are Ram Speed   (I am aware of another set with the same name) Ramming Speed, Greeks at Sea, and Trireme Ancient Naval rules (also other rules with the name Trireme).  These are all better suited to squadron level actions with most concentrating on the earlier Trireme period.   Greeks at Sea does include 7's and 10's along with penteconters through 5.s, but is missing about half the different ship types.  We are planning on fighting the battle of Chios at the South Bay Game Club meeting in March and I may also run it at the Miniature Wargaming Society meeting in February.
Posted by William Butler at 5:00 PM