The Vela Campaign Battle of Menkib

Since the Battle of Menkib took place several years ago the following is only a general account of the action. 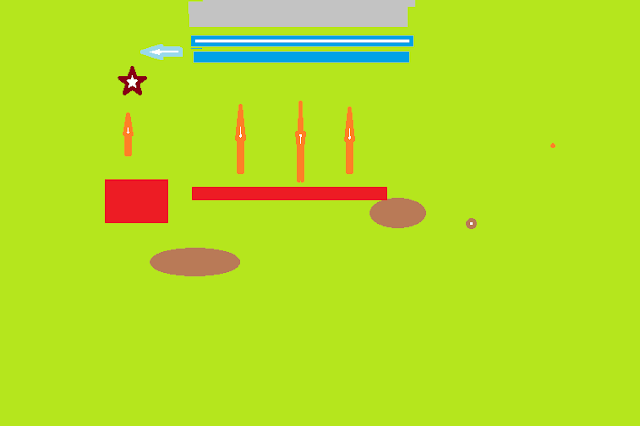 The above is a map of the battlefield, the initial dispositions, and the attack by the invaders.   The Aquilan forces are in blue.   The solid line is the Sniss Mercenaries consisting of mostly heavy pike armed infantry.   The other is the Aquilan Air Corps.  For this battle they were bow and javelin armed troops on flying carpets.    The invading force from Argos is in red.   The box is the dragon corps, while the line is the Argonian noble cavalry (lanced armed heavy cavalry.

The rules used were Scutarii.   Players got to choose the type of troops they would field for their army only limited by the points available.   The Aquilan Air Corps and the dragons had to be flyers.  Ray and Steve commanded the Argonians, while Ken and Ron commanded the Aquilans.

Having deployed their armies, the Aquilans held their ground outside the city walls while the Argonians advanced.   The dragons attempted to flank the Aquilans, but were swarmed by the more numerous Aquilans and suffered heavy casualties from their bow fire.  Every time they attempted to contact the Aquilan flying carpets, the target of their charge would evade away and others would swarm around them.    On the ground the Argonian nobles could not make any headway against the Sniss pikes.  There were no flanks that they could attack and while they could have charged directly into the front of the pikes they elected not to.   If they had done so, even with their better armor they would have suffered greater casualties being out fought due to the Sniss having twice as many attack dice as they did.

Eventually the dragons had suffered enough and fled from the field.   Seeing this the Argonian nobles chose to withdraw in order to avoid being destroyed by the combined efforts of the Aquilan Air Corps and Sniss.

The following is an editorial from the Akamar Herald that was sent to the players after the above battle had been fought.


IT HAS COME TO THE ATTENTION OF THE AKAMAR HERALD THAT CERTAIN UNSCRUPULOUS PERSONS ARE TRYING TO BENEFIT FROM THE SUFFERING OF THE SURVIVORS OF THE RECENT EARTHQUAKE IN HOROLOGIUM.   A CAREFUL READING OF THEIR PLEA FOR AID INDICATES THAT THE FUNDS GIVEN TO THEM WILL NOT GO TO PEOPLE WHO NEED IT MOST.  INSTEAD IT WILL BE USED TO LINE THE POCKETS OF THE DIRECTORS OF THE HOROLOGIUM EARTHQUAKE RELIEF FUND.   YOU ARE STRONGLY URGED NOT TO BE MISLED BY THIS.  INSTEAD YOU ARE URGED TO FIND A MORE REPUTABLE CHARITY ORGANIZATION IF YOU WISH TO PROVIDE HELP TO THE EARTHQUAKE VICTEMS.

Posted by William Butler at 8:03 PM