The Akamar Herald Year Five An exchange of messages

Normally Gary's turn would have been before Hal and John's.  However Gary had to be out of town for a while and did not have internet access at that time.   As such his turn took place after Hal and John's.   This issue included an exchange of messages between the players.


DUE TO THE DIFFICULTY OF TRYING TO CROSS THE MOUNTAINS SEPERATING THE CALIPHATE OF MONOKEROS FROM PISCIS THE CALIPHATE HAS DECIDED NOT TO INVADE THE INFIDELS.  THE PRESENCE OF CASTLE TMOS DEFENDING THE PASS THROUGH THE MOUNTAINS WAS ALSO PART OF THE REASON FOR CALLING OFF THE INVASION.   ATTACKING THE CASTLE IN THE NARROW CONFINES OF THE MOUNTAIN PASSES WOULD HAVE BEEN ALMOST IMPOSSIBLE.    UPON LEARNING OF THIS THE MERCENARY CONTRACT ISSUED BY THE CHURCH OF THE ONE TRUE FAITH IN ERIDANUS WAS CANCELLED.


NONOOK (THE GIANT KILLER) AND UNGOOK (THE TUSK EATER) HAVE TAKEN OVER THE COUNTRY OF MUSCA AND BROKEN ITS TIES WITH THE ALLIANCE.   MISSIONARIES OF THE ONE TRUE FAITH, LED BY ARCHBISHOP BUCKET (PRONOUNCED BOOKAY) HAD BEEN SPREADING THEIR GOSPEL TO THE TRIBES OF MUSCA.  NONOOK AND UNGOOK REALIZED THAT THE RECENTLY CONVERTED ZEALOTS WOULD HELP THEM SIEZE THE COUNTRY BY PROMISING TO CONVERT ALL THE INHABITANTS TO THE ONE TRUE FAITH.


LETTERS TO THE EDITOR

You will at times receive a copy of The Argonaut, Argos's own newspaper. The main reason for doing this is not to either rival or supersede The Akamar Herald. (The Herald is, after all, The Newspaper of Record.) The raison d'etre is for having available to distinguished readers investigative journalism which will concentrate on the V.E.L.A. Group, and especially on Argos.

NOTE: The Argonaut is published in the town of Jasonia--close enough to Argos's Capital, Nekkar, but far away enough to not contaminated by the "Capital Lifestyle."


Publishing in Jasonia is not by choice.  M Etternich is well aware that the so called “Capital Lifestyle” that he so wishes to avoid, is actually the smoldering seeds of the Alliance.  He is also aware, that despite his efforts, the Alliance dies hard.  The true Argonauts do not forget that the Alliance offered M Etternich shelter when he was in fact “a man without a country.”  He is apparently peddling his V.E.L.A. trash outside of Argo as he finds it a very hard sell within Argos and especially in the boulevards and alleys of Nekkar.

Always of the Alliance (AotA) 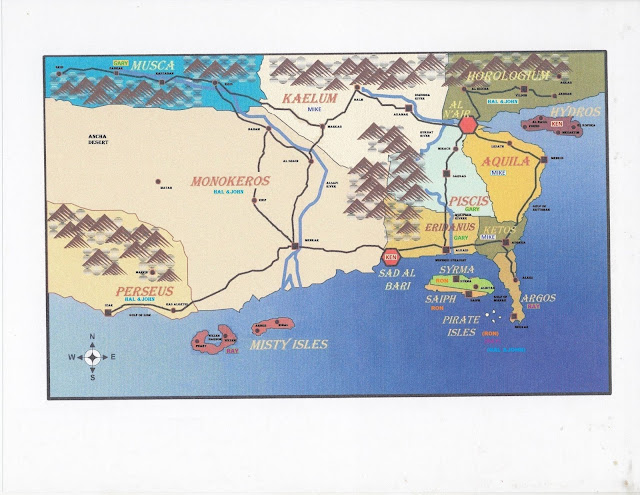 Posted by William Butler at 7:28 AM