It was now Ron's turn and he drew several event cards, including the one that ended the campaign.  At this point it was time to determine the victor(s).   There were two things that counted towards the determination of the winner.   The most important was the number of countries controlled.   There were three who controlled three countries.  Gary, Mike, and Hal and John.   Ray and Ron had two countries, while Ken controlled one.  The next item was the amount of money in the treasury.  Mike had amassed a huge fortune of 152 talents putting him in first place followed by Gary in second with 70, then Hal and John in third with 49.  Ron took fourth over Ray in fifth by having 10 more talents than Ray.   Ken ended up in sixth after grabbing seven countries at the start of the campaign.

The campaign had started in June of 2005 and ended in May of 2006.  Mike had provided several stories based on events that happened to his countries along with an improved version of the campaign map.

There was fortified city that was never brought into play.   This was Al Nair.   It could only be played by someone controlling Horologium, Piscis, or Aquila and had to be melded with one of those countries.   As it turned out Ron had held it in his hand throughout the campaign.  He couldn't play it as he never controlled any of the three countries and if he had discarded it, then one of the following players would have quickly grabbed it.

Other than Ron none of the players who controlled the Misty Isles ever made use of the campaign magic available to whomever had the Wizard, the Sorcerer Silidon, or the Sorcerer's Apprentice controlling the isles.


THE LATEST MERCHANT FLEET HAS PASSED ALONG THE SOUTH COAST.  STOPPING AT PERSEUS AND SAD AL BARI.

THE GRAND CONFEDERATION HAS RECEIVED A DONATION OF 10 TALENTS FROM A MYSTERIOUS STRANGER.


A STRANGE SPELL HAS BEEN CAST UPON THE CONTINENT OF VELA.  ALL MILITARY FORCES HAVE BEEN DISBANDED,   LEADERS OF ALL THE COUNTRIES ARE SWEARING ETERNAL FRIENDSHIP WITH EACH OTHER AND AN AURA OF PEACE AND TRANQUILTY CAN BE FELT THROUGHOUT THE LAND. 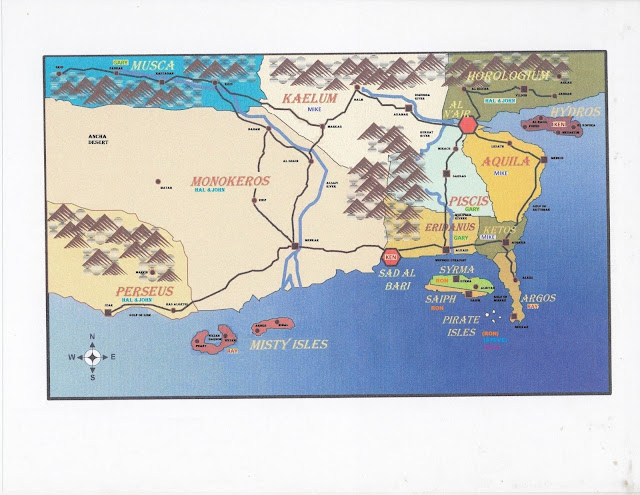 Posted by William Butler at 7:15 AM