One of the more recent releases from Wiley Games is their "Starfighter" rule book. This is mainly designed for space fighters, but also includes rules for large ship actions. There are some YouTube videos for the game.

I decided to convert the ships from the Game Designers Workshop board game "Star Cruiser". While out of print the game is available from WargameVault or DriveThruRPG as a PDF file. Star Cruiser is a very hard science space combat rule system. There are quite a few similarities to the ship combats and weapon systems in David Weber's Honor Harrington series. Although, the FTL drives are different as are the story backgrounds. In addition to the background history the game includes a good variety of ships for the different protagonists in the setting. There is also a ship design manual if you want to design your own ships. The process of designing a ship is very extensive with items like the power plant, life support, crew accommodations, weapons, sensors, etc. Fortunately, someone made an excel spread sheet where all you have to do is plug in the various items and just add as many hull sections as are needed to hold all the internal components and have space on the outer hull for the sensors, weapons, and other surface mounts. I used it to design a ship similar to the later designs of the HonorVerse. Most ships in the game could only launch one or two missiles per turn. The one I designed could launch 36 at once.

I have designed my own background setting, "human space", for the space and ground combat games I have played. There are several posts on this blog with photos of the various ships, etc. These can be viewed by clicking on the labels for this post. The main human factions are the Panthari Imperium, The Domain, and the Federated Worlds or Federation. There are also a few dozen independent human worlds and some alien races. One of the alien races is aggressive xenophobes known as the "Blue Meenees" for their skin color and their high pitched screeching communications. Little is known about them other than the general direction their ships seem to be coming from.

In order to convert the Star Cruiser ships I needed to divide most of the weapons and some other items by six to determine how many of each to place on a ship for StarFighters. Shields and armor ratings were only divided by three. Others systems like scanners, life support, crew accomadations, powerplant volume, etc. were ignored. Movement rates were adjusted to match the Star Cruiser values. This meant that ships moved a bit slower than the StarFighter rule book. I also made a slight modification to the ion cannon statistics and the lasers. This involved a bit of mathematical calculations. In the rules Ion cannons take of two spaces, cause two units of damage, can only be fired every other turn, and have a range of 2/3 the lasers. Since the caused equal damage as a medium laser the calculation was half the availability multiplied by two-thirds of the range resulting in a value of one-third the number of spaces that a medium laser would occupy. Since a medium laser occupies two spaces this would be two-thirds of a space on the ship. By increasing the damage from two to three an Ion cannon would occupy a full hull space, have two thirds the range, and only be available every other turn. This makes them more effective for the game, though ships equipped with them have to get closer than those with lasers. The rules for lasers were also modified to have them function as both an offensive weapon to attack other ships with and as point defense systems to destroy attacking enemy fighters and missiles. In theory ion cannons could also be used as a point defense system. However, if they have been used offensively previusly then they cannot do so and if they are used as a point defense then they would not be able to fire offensively. If a ship is being attacked by enemy fighters or missiles each point defense weapon that can fire into the arc that the attackers are in may engage one target defensively during the enemy attack. Firing arcs were also changed to a full 180 degrees from the 45 degrees in the rules. Firing arcs being determined from the cener post of the ship's mounting stand.

The following are the statistics for the ships of the various factions. IC is ion cannon, L is light laser, ML is medium laser, M is missile, FB is a fighter bay, S is shield, A is armor, ATC is Advanced Tactical Computer (aids in targeting), RB is repair bot. Laser and Ion cannon firing arcs are denoted by F for forward, P for port, and S for starboard. Damage is the number of damage hits the ship can sustain (40% of hull spaces). If there is an F next to the movement rate then it is a fast ship. (X) indicates a hull space used for the fast movement ability or the second space for a medium laser. 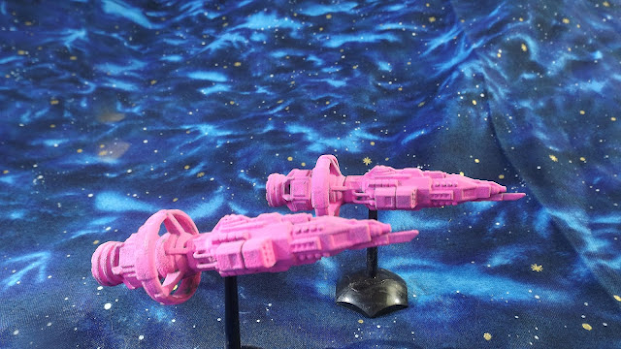 Pantharii Imperium (and yes, they are the pink Panthari.  Painted for my daughter)

The Panthari Imperium focuses more on lasers than missiles. 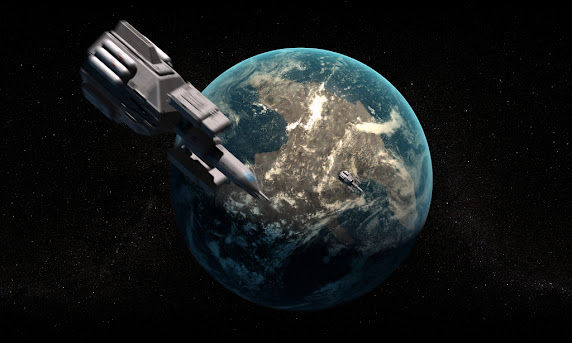 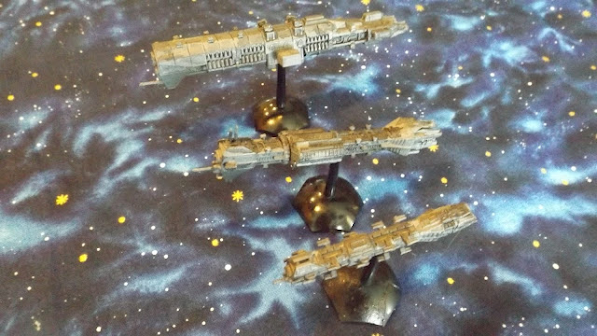 The Domain's technology level is slightly below that of the Imperium and Federation. Other than the new carriers and battle cruisers, ships use fission reactors instead of fusion reactors like the other two major human powers. They also favor missiles, but have included ion cannons in their designs. 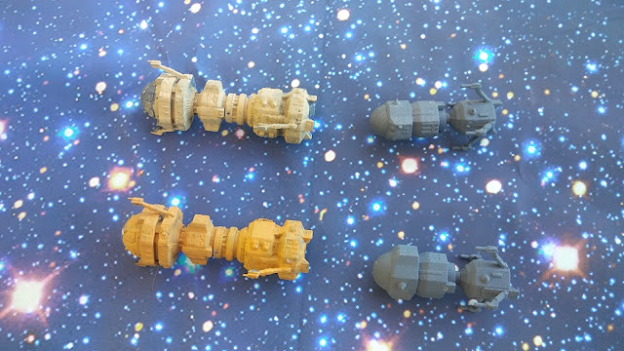 The Blue Meenees use large, heavily armored and shielded ships. They do not have fighter carriers. There also tend to be fewer missiles and beam weapons than most comparable human sized ships. Examination of a destroyed Alpha found a mix of technologies that were both more advanced than and inferior than human technology. What appeared to be living quarters were very Spartan compared to those for human crews. Ship designations are based on the Greek alphabet. Alphas and Betas were the first two ship types encountered along with the fighters being designated Gammas. The massive Deltas and the differently designed (compared to the other ship types) Epsilons were encountered later. The third S and A values are redundant values for the StarFighter rules. They do not add any additional saving and eliminating one of each will not reduce their save. That is, a second shield space would have to be eliminated to reduce heavy shields to light shields.