BACK TO CLUB GAMING

With the lifting of Covid restrictions the local game clubs are having face to face meetings. The South Bay Gaming Club is holding meetings at the church again and The Miniature Wargaming Society of Sacramento had a meeting at The Game Castle hobby shop in Sacramento. The community room at the Charmical library where they used to meet is still not available for public use. The Game Castle had a 40K tournament last Sunday so the club was limited to three games. Two were in the private rooms and one was at a table in the main gaming area. There were a lot of well painted 40K miniatures being used in the tournament with at least two dozen players. The three games were Command and Colors Napoleonics hosted by Roger, DBA hosted by John, and Blitzkrieg Commander 2nd edition hosted by Keith. I participated in the BKC game commanding the Russians in the river crossing scenario vs Mike as the German player. The setting was late war about early 1945. The river had four crossing points two fords and two bridges. There was minimal terrain with no high ground, several woods, and several fields. The bridges were in the middle with a ford near each flank. I decided to have one force threaten the left ford and bridge, a second force threaten the two bridges, and the third force at the right ford. Mike was not as experienced with the rules and didn't realize that vehicles could not fire and move. His overall deployment was good otherwise with a strong force hidden in the wood protecting the ford on my right, another in the woods guarding the ford on the left, a third force in the woods between the two bridges, and some Tiger IIs and a Jagdtiger guarding the bridges. I was able to get mutiple activations on the first couple of turns, moving and then firing. Though I took some loses from opportunity fire and for a while Mike had the advantage in losses caused, I was eventually able to turn his flank on my right as I came across the ford. My left and center forces concentrated on taking out enemy units on my left and right as my right flank force came across the ford and the bridge in the center right. Eventually Mike's loses caused him to take a check for exceeding his brak point. Though he passed is position was now untenable and he conceded the game. I didn't take any pictures of the game, but Roger posted one picture of his Napoleonic game on the club's Groups.io forum 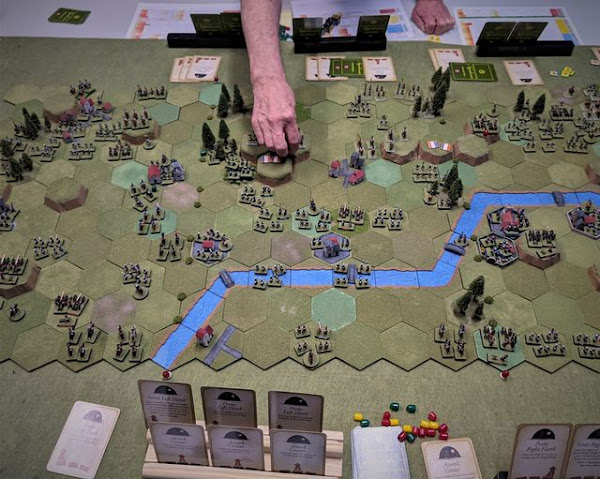