One of the clubs that I belong to has a painting "competition" for the month of April.  The option of the contest is to paint as many of unpainted figures as possible.

Today I completed one of the painting projects that I am working on this month.   The army has three "divisions representing the Amun, Re, and Suktekh divisions.   Each division was given a specific color to differentiate them. These are red, yellow, and blue.  In addition to the three main formations there is the Pharaoh in front center, two additional commanders, two units of guard infantry and one unit of Nubian archers.

Each Division has four units of archers, two units of close order fighters, one unit of Nubian archers, one unit of light infantry and 9 units of chariots.  The middle chariot in the front row is the division commander.  There are 176 infantry figures in each division, 18 charioteers plus one standard bearer, 18 horses and the 9 chariots.

The guards have 64 figures plus the 16 Nubians  The Pharaoh and commanders have 12 figures and
one mounted scout plus the chariots and horses.   Total figures painted for this army is 678 figures, 61 horses, and 30 chariots.  Except for the Pharaoh, who I purchased from Baccus, all figures are from Rapier Miniatures. 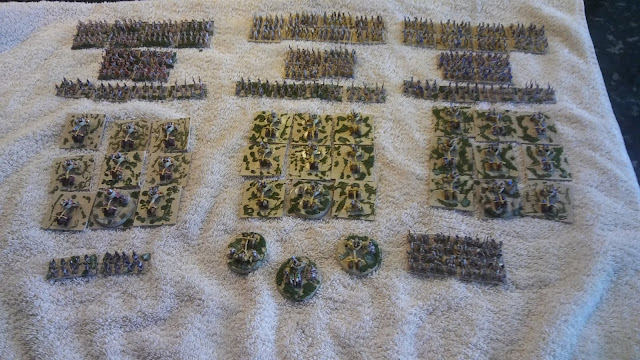