Droid! Droid! Who's got the Droid?

Played another game of FFoL: Galactic Heroes at The Launchpad Game day February 9th.  This was the scenario from the rule book where the rebels have one droid with half the plans for the Death Star.  The other half is with one of the four droids roaming around the town.   The rebel pair of two five man teams starts in one corner and must make it to the starship at the port in the opposite corner.  The Imperials have two five man teams.  One in each of the other four corners with the mission of stopping the rebels and capturing the tow droids with the plans.  The rebel objective was to get both droids to the waiting spaceship at the port.   The imperials was to prevent this and capture both droids.

My plan was to send the majority of my teams to my right  and angle towards the spaceport.   A small covering force would try to pin down the imperial team coming from the left corner.   Gary commanded the two imperial teams.   Gary was able to get to all four droids before I could.   He found the other half of the plans with the third droid he reached near the fuel depot and crawler.

While my delaying team was able to hold off four of the imperial troopers from the team they were facing.  My main force was held up engaging the other team in a firefight.   The fifth member other team had worked his way around behind the tavern to get to the fourth droid, keeping him out of action.-

Gary had back luck with most of his shooting die rolls, getting out of ammo at least three times during the game.   My shooting die rolls were a bit better.   Eventually my two guys engaging the left imperial team took out two of them and the other two headed towards the spaceport.

On the right I was eventually able to prevail taking out two of the right hand imperial team and the fifth one from the left who had moved up to the port along the main street in hand-to-hand combat.   Another two imperial troopers were also shot down leaving Gary with only three men left to try and prevent my remaining eight guys from getting to the ship with the two droids.   I had managed to shoot the imperial soldier who had captured the other droid and had two of my men move to it and take control.

In all it was a fun game that took a little over two hours to play.  I took a few pictures at the start of the game.   There was so much happening during the game that I forgot to take more. 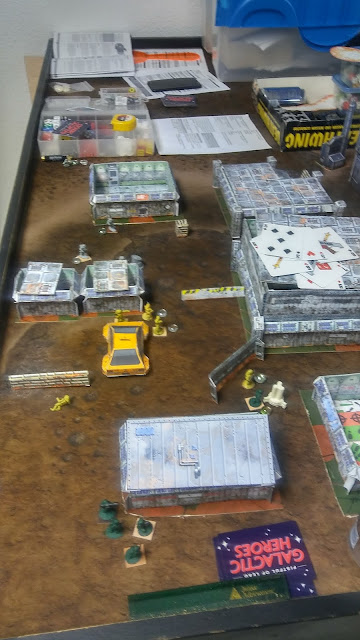 view from my starting corner.   about half of my guys have moved.   the droid I started with is the white object just below the lab with the cards on top of it.   The tavern is just above the lab.   The playing area was three by four feet.   I started by sending one team leader and two of the regulars towards the left team. and initially positioned the heavy weapons specialist near the fence by the lab to support them.   On turn three I moved the leader to the right hand group along with the specialist.  One of the wandering droids is the grey object just above the building to the left of the lab.   Another was at the back corner of the tavern.   A third was at the spaceport near the landing pad and buildings.   The fourth, which turned out to have the other half of the Death Star plans, was wandering along the main street near the crawler and the fuel depot. 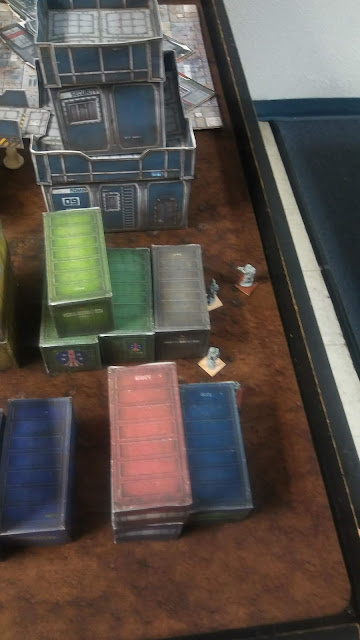 The container yard with the other imperial team moving towards the port.  towards the end of the game I took out this team leader with a to hit roll of nine and followed that with a to wound roll of nine.  The crawler and the fuel depot are out of the picture at the bottom left. 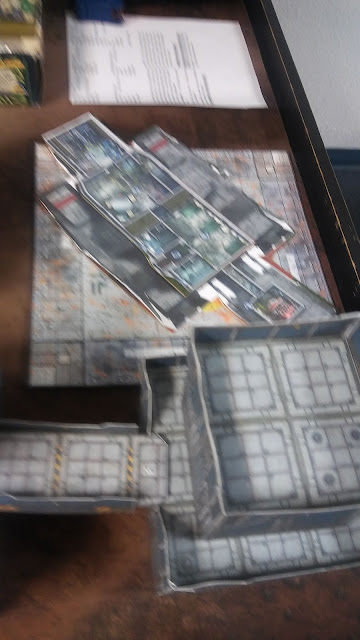 The waiting spaceship at the port.   This was a two deck plan that I printed and glued to artist mat board.

Posted by William Butler at 5:38 PM