The Battle of Trebia at Pacificon 2017

Trebia was the first of two games that I ran at Pacificon.   I had originally scheduled the game to run from 10:00 AM until 2:00 PM.  However, two additional ancients games were added to the schedule with the first starting at noon.  Because of this I changed the times from 9:00 until noon.   There were six people who participated in the game.  Considering all the games that were being run that morning this was a good number of players.   The table measured 6 feet by 10 feet.

The armies were as follows:
Surprisingly both armies had equal points.   There was a special rule that I thought of including for the game to reflect the Romans crossing the cold water of the river and not having time for their morning meal.   This was to have the players roll one die for each unit with an odd numbered result causing the unit to start the battle with one hit.  Since this was a convention game and meant to be fun for all, I decided not to use this. 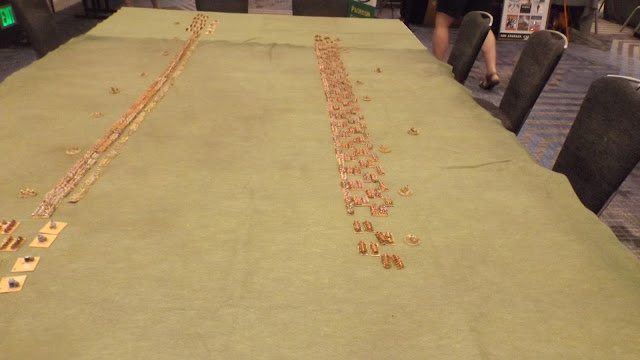 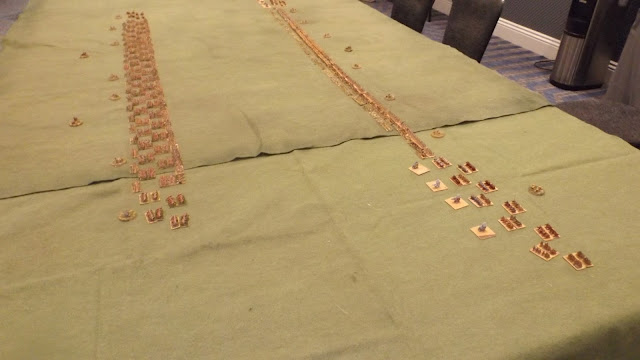 View from the opposite end 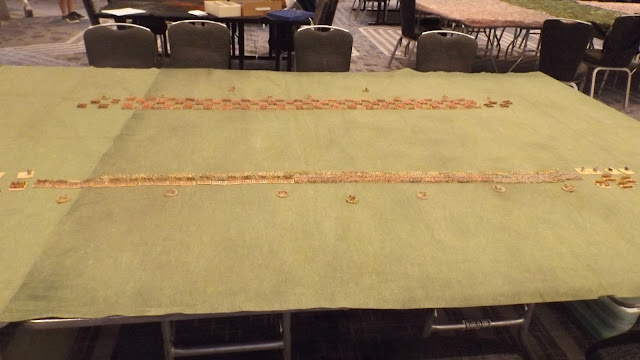 View from Carthage side.  Spanish infantry on right African infantry in the middle, Gauls on left, skirmishers in front. 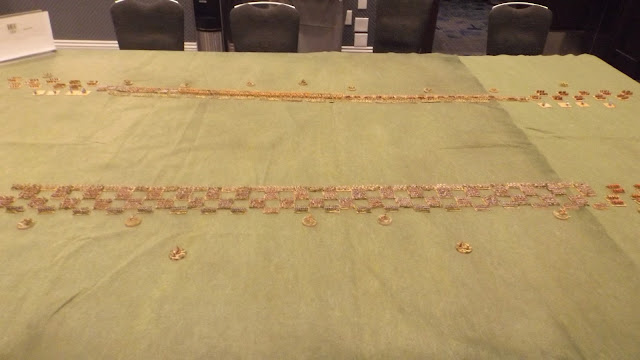 Behind Roman lines.  Two combined Consular armies in standard Roman deployment
Carthage had an overwhelming advantage on both flanks with the elephants and cavalry outnumbering the opposing Roman horse, but their infantry was outnumbered by the Roman infantry facing them. 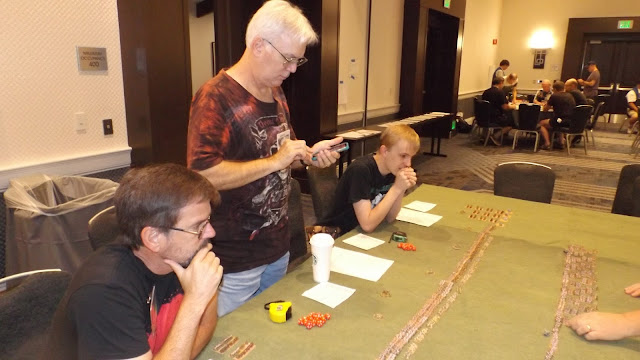 Carthaginian commanders.  Steve (Hannibal) at the front and his son Matt at the back.. 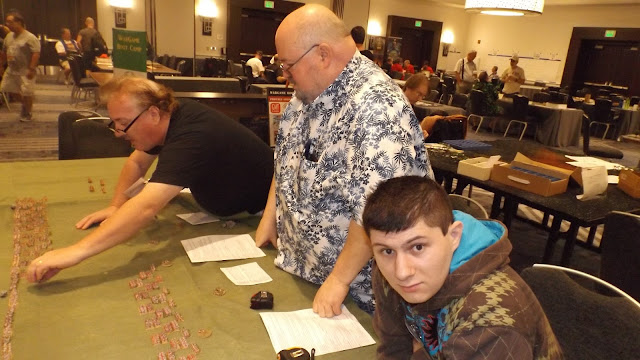 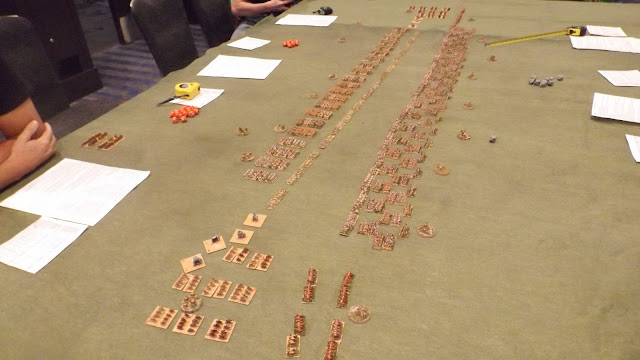 On turn three the Spanish cavalry arrived on the Roman left flank behind the Roman lines.   With their flanks in jeopardy the Romans shifted their velites to protect the flanks of the heavier infantry. 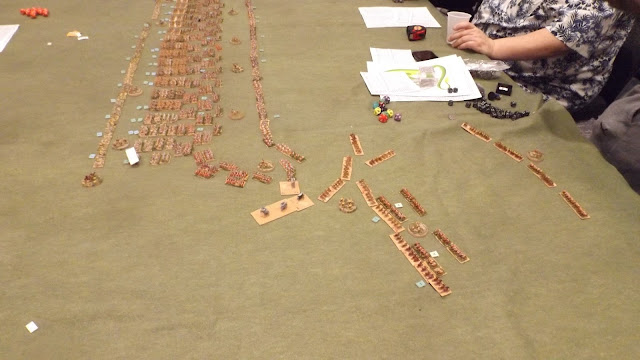 Turn 3 Carthaginian flanking force has arrived and ridden into the rear of the Roman left. 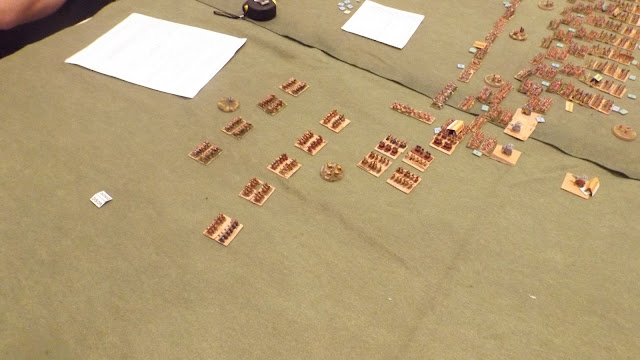 Other end of the battlefield.  Roman cavalry has fallen back evading contact

Eventually the Roman infantry were able to cut their way through the opposing infantry center.   At this point Carthage conceded and the game was called at 12:06 PM.   Actual play had started after 9:00 following an explanation of the game mechanics. 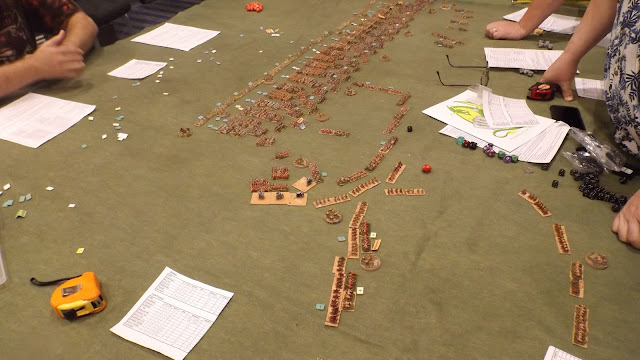 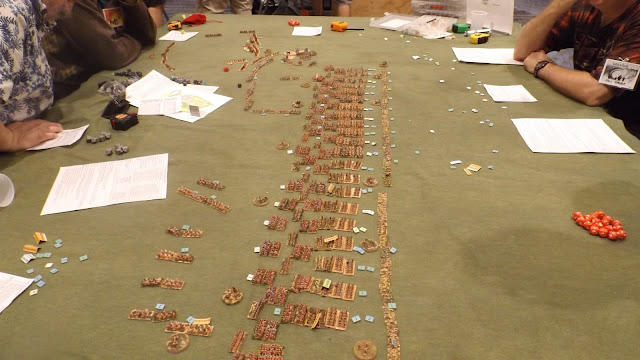 Velites shift to protect flanks of the main battle line 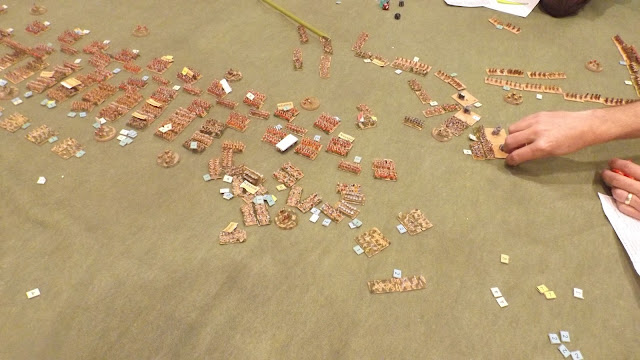 Right end of Carthage infantry routs.  Soon to be followed by the rest of the infantry.﻿
﻿

The Roman army is all Rapier Miniatures figures and is just over 2000 figures.  The Carthaginians are mix of Irregular, Baccus, H&R, and Rapier. and is also about 2000 figures.
Posted by William Butler at 6:56 AM

So the essential flank victories didn't come! Were the elephants misused, or was it just the Romans' day? Looks spectacular seeing so many troops on the table.

Clicking on the seventh and eighth pictures shows the elephants engaging the Roman infantry.