Comparison of Baccus and Rapier phalangites

Both Baccus and Rapier make several packs of Macedonian and Successor phalangites.  Rapier has four packs.  Each pack contains 24 of one pose and helmet variant.  The two poses have the pikes at either vertical or at a 45% angle, both with two different helmets.   Rapir does include command figures in each pack replacing three phalangites with an officer, standard bearer, and musician.  However, you can request that the packs do not have the command figures.  Baccus also has four different packs, with 96 figures in each pack.   Two without pikes and open hands for adding pikes and two with cast pikes.   They are available with either standing poses holding the pike in a vertical position or advancing with strips of four different poses - two vertical and two at about a 45% angle.

I purchased a pack of the advancing phalangites with the cast pikes from Baccus a while back when I was starting the project for Raphia.   The four pose strip is 20mm deep allowing eight strips to be placed on a 40mm wide by 20mm deep base.   However, it would be necessary to cut the strip in half in order to avoid having a multiple base deep phalanx having alternating pairs of lines with vertical and sloped pikes.

Both Rapier and Baccus are the same size and could be combined in the same unit as I have done with my American Civil War figures, except for one major difference between the two.   Although the photos are slightly out of focus,  the casting quality and detail are equal.   Pike lengths are the same.  Rapier's other helmet is similar to the helmet on the Baccus figures.   The Rapier figure is one I broke when removing it from a base.  The Rapier figure is holding his pike with more of it behind him than the Baccus figures.  Baccus uses a softer metal alloy resulting in the pikes bending more easily and becoming wavy instead of straight.   All of the above are minor.  The main problem with the Baccus figures is their shields.   They are too large and flat.   Their size is closer to that of a Hoplite's instead of the one used by phalangites.  Both Hoplite and phalangite shields were convex and not flat.

Except for this one strip that was overlooked, I sold the Baccus phalangites to another club member and ended up painting about 4000 Rapier figures for Raphia.  Raphia Project phalangites  If I had included or used Baccus there would have been another thousand or so to be painted.
\
Update:  Found out from Baccus that their phalangites have been revised with a smaller slightly convex shield.   I will have to purchase a pack of the newer figures to see how they compare.

2nd update:  see part 2 of the comparison at http://18clovehamhock.blogspot.com/2017/04/comparison-of-baccus-and-rapier.html 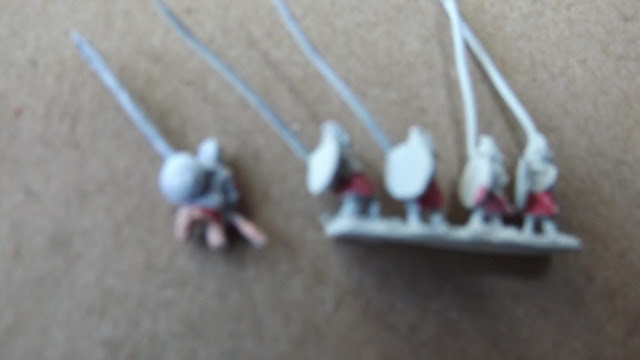 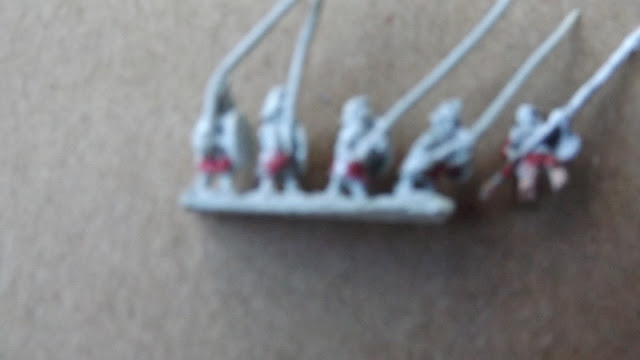 Posted by William Butler at 7:01 PM