This past Saturday I hosted two battles at the Western Front Game Convention at Randy's House of Games in Sacramento.  The morning game was the Battle of Marathon.  Rules were Scutarii.  The Greeks were from Rapier Miniatures and the Persians were a mix of Rapier and Baccus.

The Greeks advanced slowly towards the Persians though the rules did allow them to make a quick advance.  The Persians were lucky and were able to get a couple of volleys of arrows off before the Greeks could close.  Their fire was deadly enough to cause several units of hoplites to become shaken and not close.  The Greeks were able to cause more casualties during melee even though the greater depth of most of the Persian line mitigated some of the losses.   The Persians were unable to exploit the gaps in the Greek line.  Though they did rout a couple of units of hoplites, Persian morale collapsed and all except a couple of units of Persian infantry who were chasing one of the routed hoplite units fled from the table.  The Greeks had 1000 hoplites routed and about 100 or so casualties on other units for a loss of about 400 to 500 men of the 10,000 they started with.   Persian losses were about 7000 of the 18,500 infantry they started with.  The 1000 Persian cavalry did not arrive in time to participate in the battle.

Aaron was the overall Persian commander assisted by a new player who's name I unfortunately did not get that day.  Chris and Scott were the Greek commanders.

Changes from the scenario published in the rule book were to increase the number of Persian infantry from 6000 to 6500, increase the attack value of the thinned center units of hoplites from 2 to 4, and dicing for the arrival of the Persian cavalry starting on turn 3.  The Persian cavalry arrives on turn 3 with a die roll of 1 on a ten sided die,  a roll of 1 through 4 on turn 4, and 1 through 9 on turn 5.  a roll of 10 resulted in not arriving. 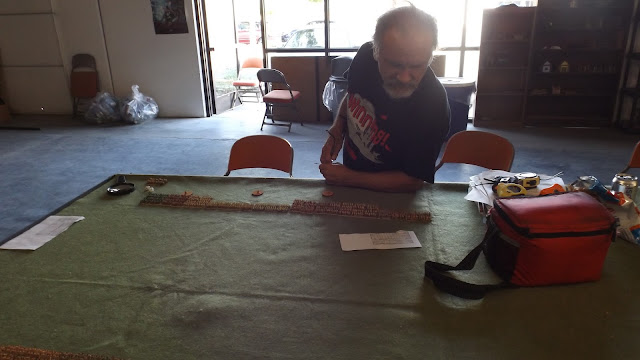 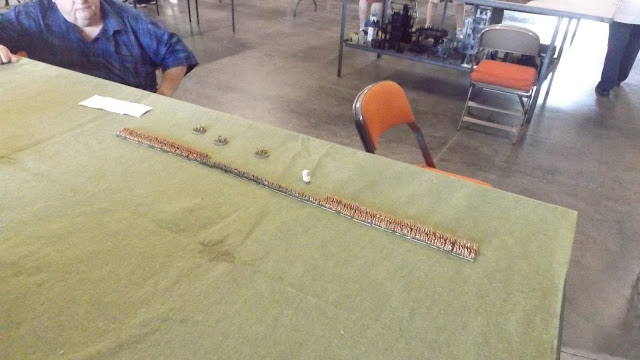 Chris relaxes before the battle begins. 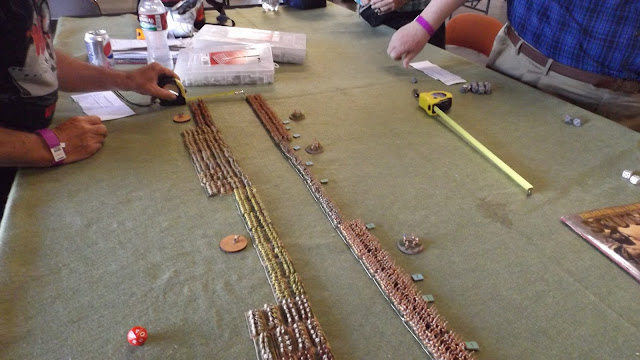 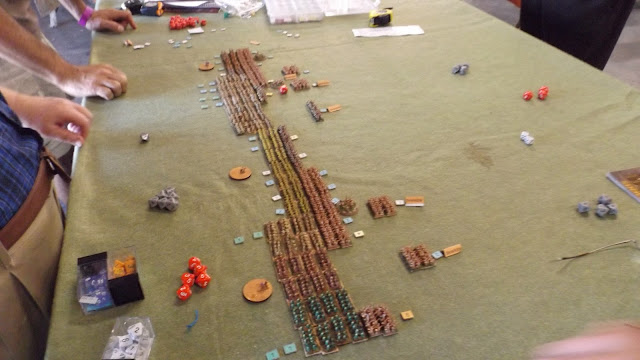 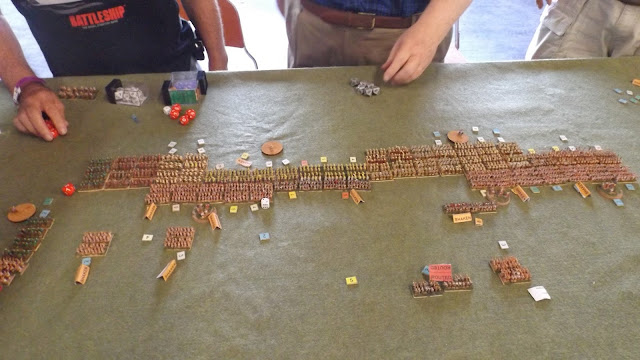 Two units of hoplites rout.  Persians pursue on far left.   On the following Persian turn the Persian army's morale collapsed as the rout of one unit caused the adjoining units to test morale causing them to rout and precipitating additional morale tests and routs.  Other than the two pursuing units all other units in the Persian army routed.
Posted by William Butler at 10:08 AM