I ran the game that I will be running at Dundracon in February on Sunday, January 18th at the MWS club meeting.  This is a fantasy version of the Battle of Bibracte with dwarfs taking the place of Caesar's legions and a mixture of Orcs, skeletons, humans, and others taking the place of the Helvetii.  Normal sized humans provided the dwarf cavalry and light infantry.   Unlike Caesar, Geezer (played by Aaron Martin) advanced his legions off the hill and met the opposing force commanded by The Dark One (played by Bernie) near the stream.

The cavalry and light infantry on Geezer's right were swept away by the opposing mounted troops.   On Geezer's left the cavalry held out longer, but eventually fled also.   The two new legions forming the back line were at first being moved to bolster the left flank, but one was dispatched to the right flank to cover the exposed  opening caused by the flight of the cavalry and light troops on the right.   This was the first use of the new rule for shifting troops from one flank to the other.  The legion arrived on the right flank just in time to meet the arrival of an additional 15,000 enemy infantry.

The dwarfs had two heroes who were attached to a couple of cohorts of the elite 5th Legion (so named for the amount of whiskey they drank with each meal).  The two heroes helped to hold the end of the right flank even when the cohort "Mohawk" was attached to became disordered.  the other hero, "Hairy", managed to survive the battle.   The same could not be said for the two magic users on the opposing side.   The magic users managed to unleash a few fireballs on the dwarfs before the first one died.  The second one exploded during the next turn leaving a mushroom shaped cloud of smoke rising from the spot where he had been.

As the battle raged on the dwarfs would pull exhausted cohorts from the front rank and replace it with a fresh one.  Meanwhile their opponents were massed in a formation 50 ranks deep and were able to absorb the casualties inflicted on them by the dwarfs.  Eventually some of the dwarfs' enemies facing the left end of their main battle line broke.  However only part of the line broke leaving their center and left flank intact.

At this point the game was called as Chris, the other dwarf commander had to leave.  The battle was declared a draw as the dwarfs were still in fairly good shape though their right flank was in a precarious situation.

The only changes from the historical battle other than the type of beings fighting it were the addition of two heroes to the dwarf (Roman) side and two magic users to the other (Helvetii) side.  The dwarfs were also rated as being resistant to magic and had a saving throw for any hits caused by magic.  The figures used were all plastic 28mm figures from a variety of manufacturers with the majority being various Games Workshop figures.  The battle was fought on a 6 foot by 71/2 foot area. 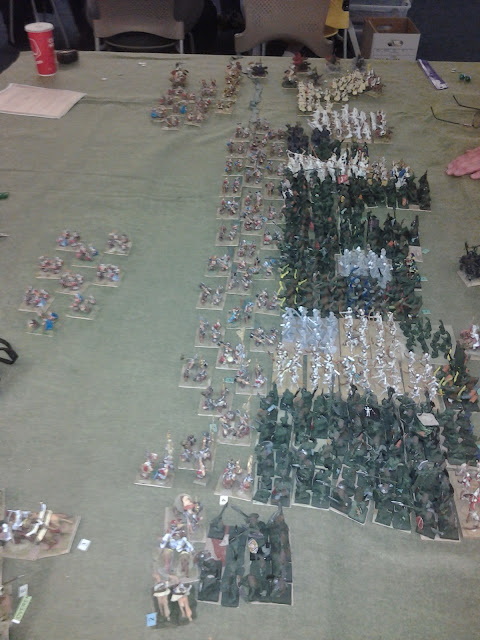 The main battle lines engage.  In the left center of the picture the legion moving to the right flank can be seen.  At the bottom the cohort with "Mohawk" attached is holding its own against the infantry and cavalry even though it is disorganized.  Hairy is attached to the second cohort from the right in the front line.  The 5th Legion is at the right end of the dwarf line. 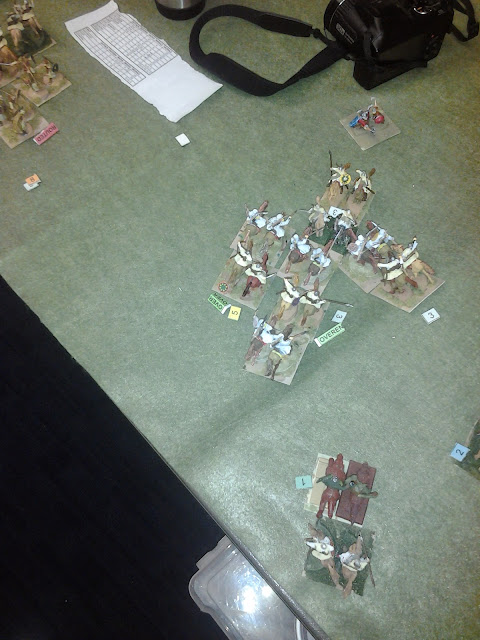 Fighting on the dwarf right flank as the last surviving unit of cavalry is engaged by three opposing units.  The pictures were taken with my cell phone camera as the batteries in my camera had died.

Ouch! Only a month to go?

It is time to get spray paint and paint brushes working big time.

Paint jobs do not have to be fancy . . . but all figures should be painted if even only very sparsely.

Spray paint the unit one color, touch it up with weapon color plus flesh or clothing color (as appropriate) then paint the bases.

Remember the axiom, "if it isn't painted, it is DEAD".

That being said, I do like the premise of your game.

Thanks for the comment. I took the pictures with my cell phone camera resulting in poor quality pictures. Everything is painted though not all to the same level at this point.