This past Sunday I drove up to the Sacramento area to visit the Miniature Wagaming Society.  I had been in contact with Greg on the MWS yahoo group about playing Lost Battles.   The MWS meets at the Carmichael Library.   They have use of a large room with a lot of tables and chairs.   The main game being played was Gettysburg using Volley and Bayonet rules and 3mm figures.   There were three other board games also being played.

Greg and I managed to play three different battles from about 10 in the morning until 3:30 in the afternoon with a half hour lunch break.   The three in order of play were Marathon, Raphaia, and Hydaspes.  We used my 6mm figures and had the rule books from the board game.  The figures are a mix of Bacchus, Rapier, Heroics and Ros, and Irregular.   All the hoplites and phalangites are from Rapier.   The Indians are mix of Bacchus and H&R.   The Persians are a mix of Bacchus and Rapier with some H&R cavalry.  The games were played on a felt mat with 14 inch squares on a 5 foot by 6 foot table.

For the first battle Greg was the Greeks and I was the Persians.   Although I almost broke through the Greek center my army was destroyed and Greg won on points also.  The following photos are from that game showing initial dispositions and the end of each turn. 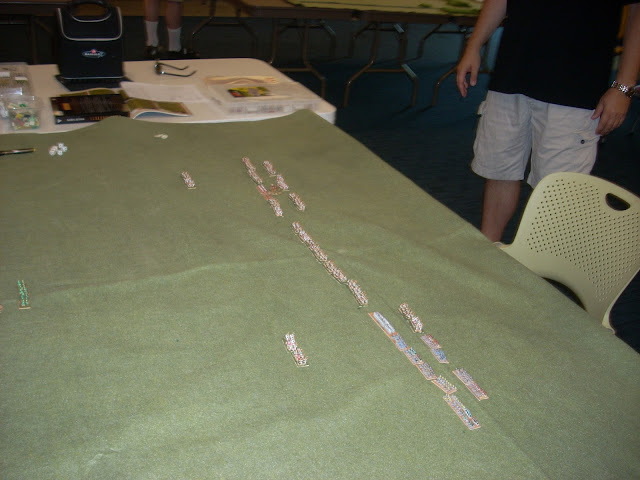 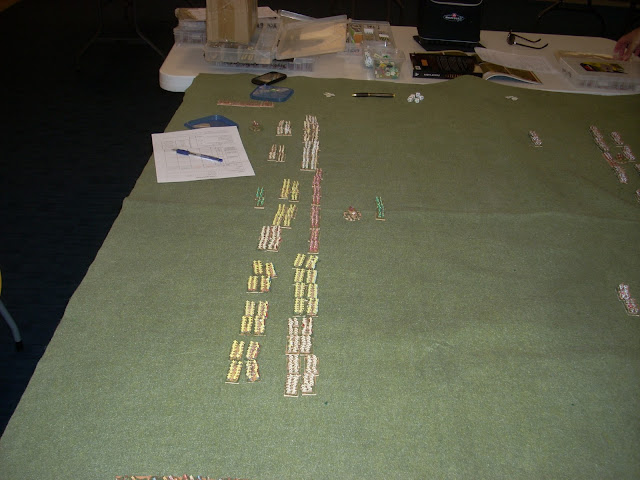 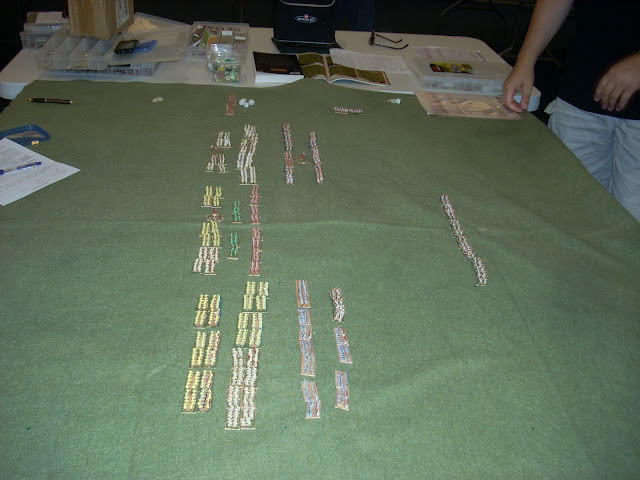 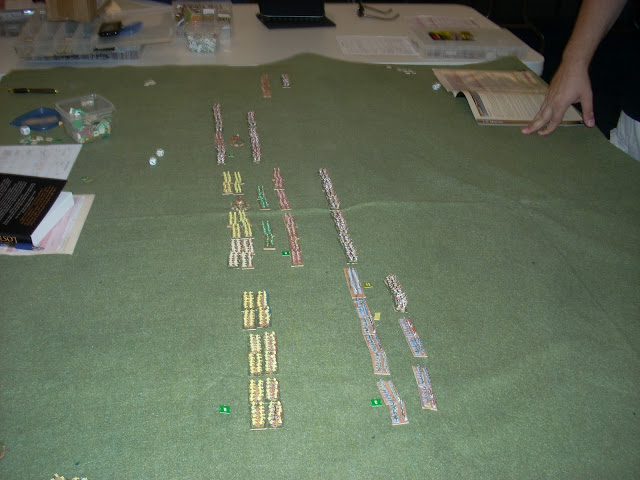 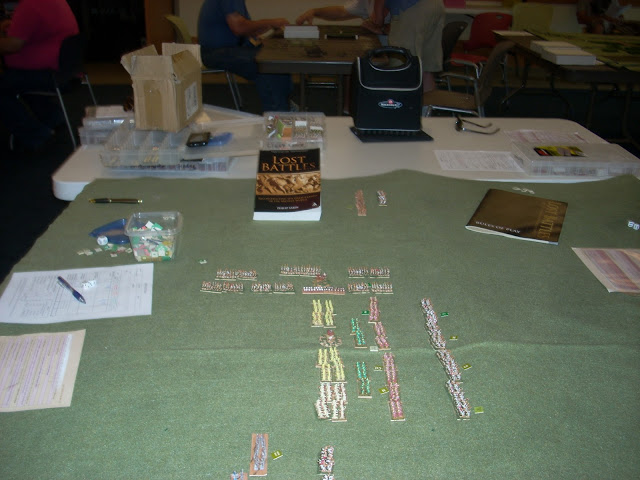 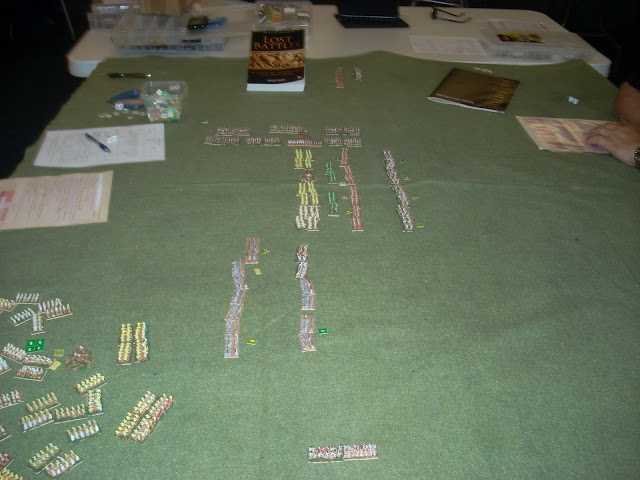 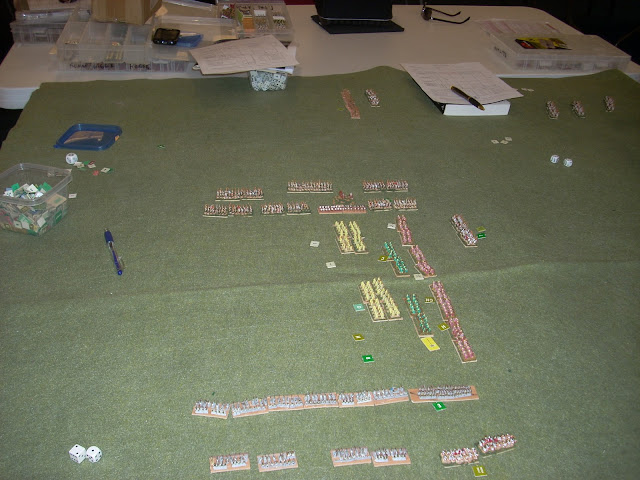 The Greek flanks close in.

Raphaia was a nail biter as both armies hacked away at each other leaving only a few remaining units on the Seleucid side.   Greg was Ptolemy and I was Antiochus.   The Seleucid army was modified slightly to match the scenario in Strategos by replacing the levy phalanx unit with two average units.   This gave an equal fighting value to both sides.   There were several points during the game where one die roll would have decided the outcome in favor of either side.   The Seleucids quickly drove off Ptolemy's cavalry on their right flank, but their elephants and infantry in the adjacent zone were defeated by Ptolemy's forces.   Antiochus made a valiant charge against the flank of Ptolemy's center.  Eventually Ptolemy's army's morale collapsed and the remaining Seleucid units were left on the battlefield to claim victory.   Afterwords, Antiochus was heard to mutter that he was thinking of changing his name to Pyrhhus. 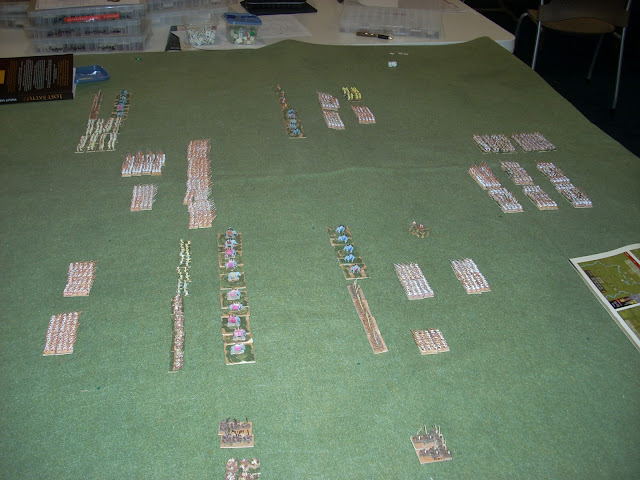 Seleucids on left, Ptolemy on right 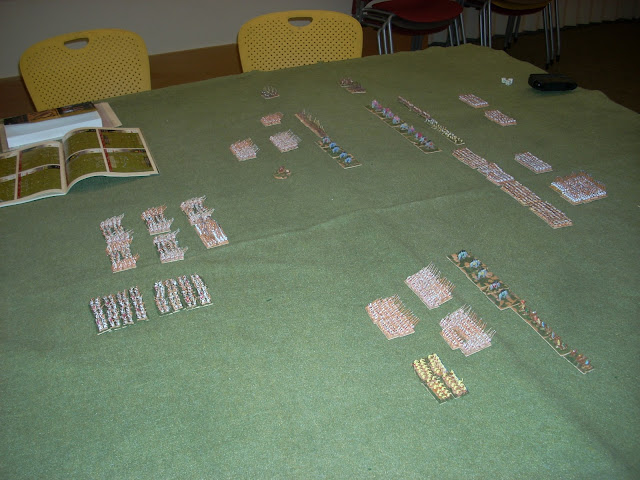 view from Ptolemy's side 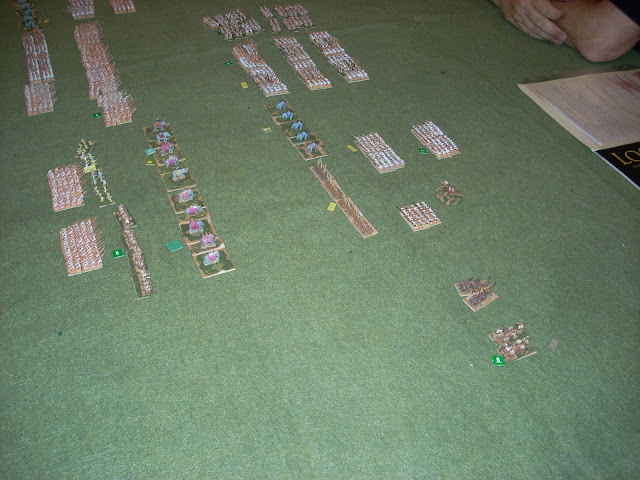 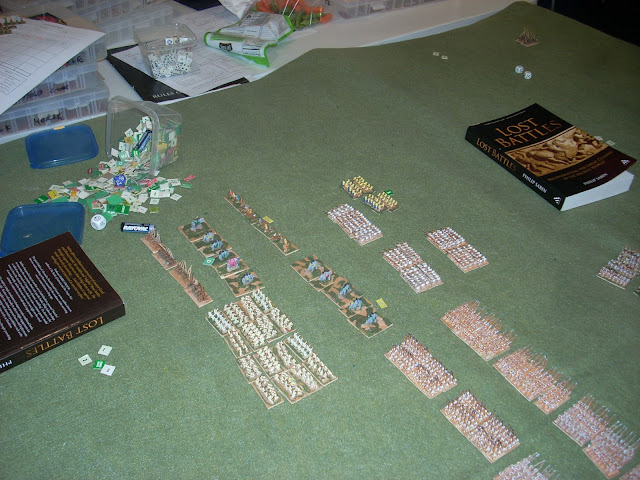 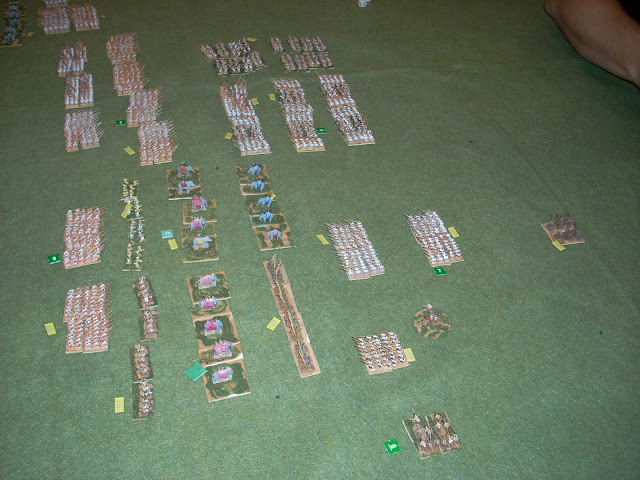 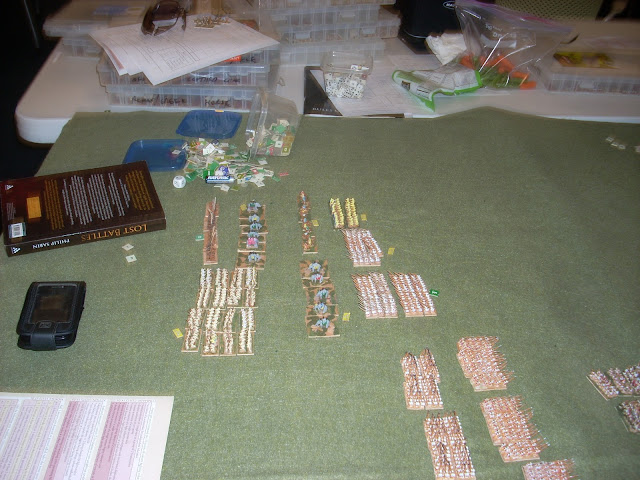 Argyraspids fled from the field. 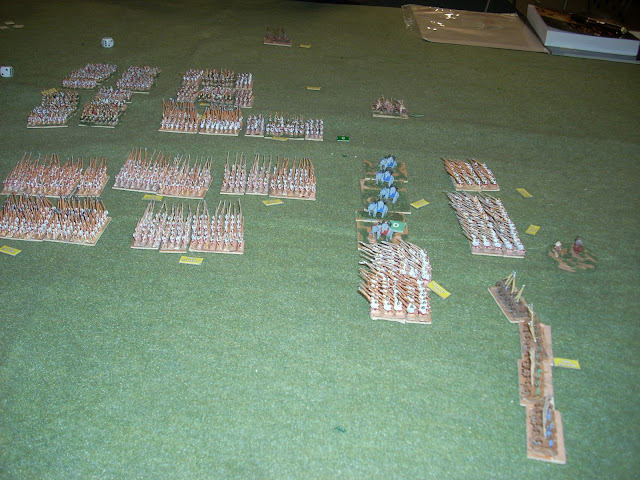 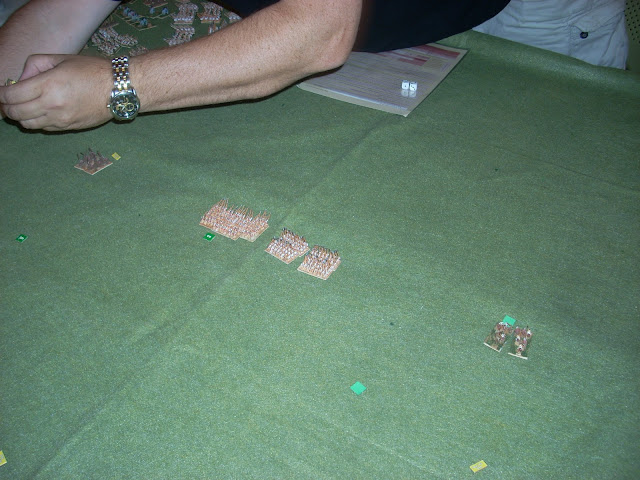 Remains of the Seleucid army. 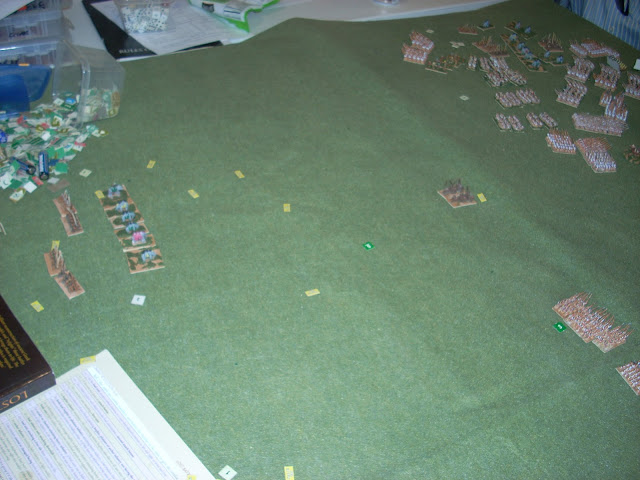 The final battle was Hydaspes.  Greg and a new club member (my apologies, but I have forgotten his name) commanded the Indian army and I was Alexander.   Instead of playing cautiously I played as Alexander and rashly made several all out attacks.   The resulting points loss for spent units gave the game victory to Greg though the Indian army was driven from the field.  Greg is on the right in black and the new member is on the left. 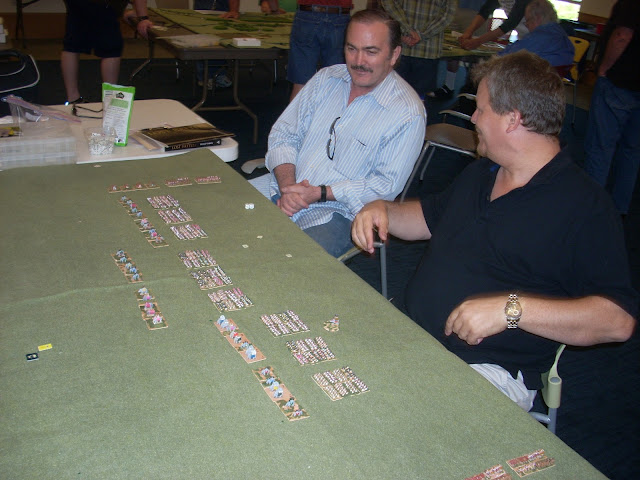 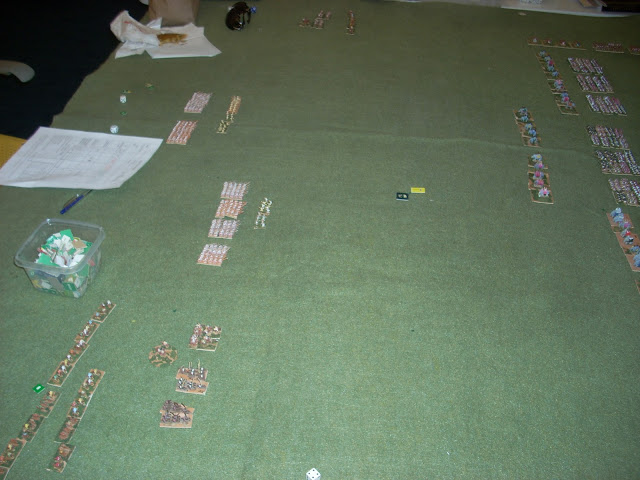 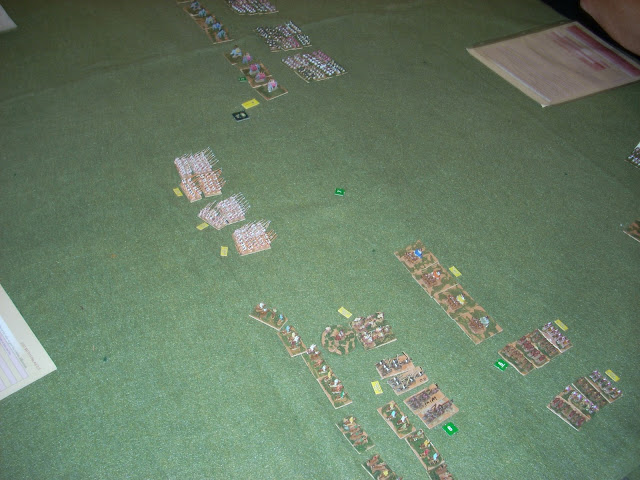 Early part of the battle.  Alexander's cavalry wing would be held up for several turns as it was unable to score enough hits to eliminate the opposing cavalry. 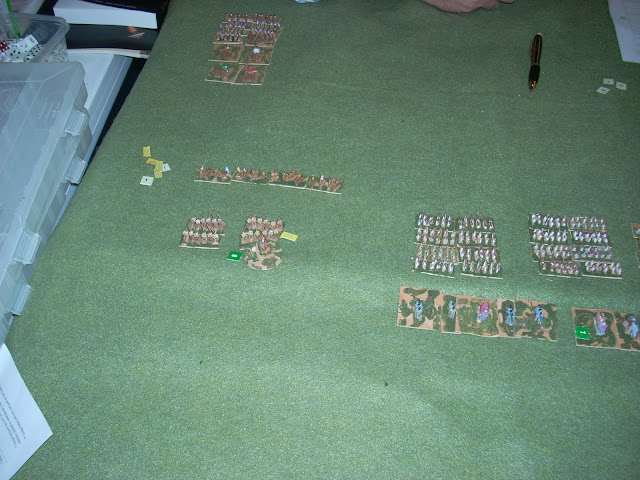 Macedonian left flank cavalry eliminates their opponents and would sweep around to the rear of the Indian army.  Alexander reserved the turn reversal until the following turn, allowing his troops to take advantage of the openings in the Indian line. 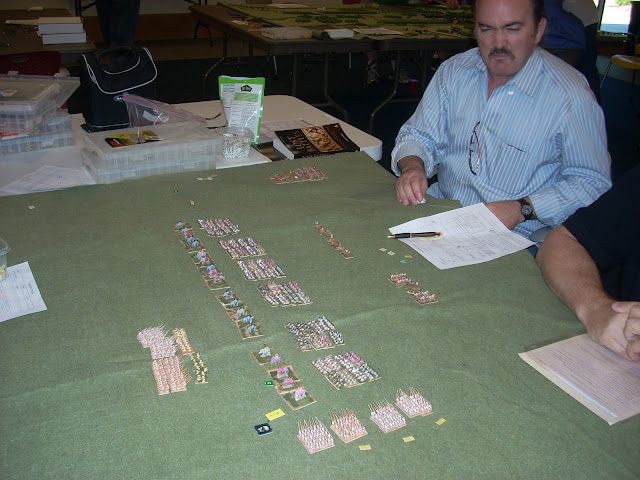 I would like to thank Greg for an enjoyable afternoon and for being a worthy opponent.  The Carmichael Library was a great place to game at.   There were quite a few eating establishments within a short distance of the Library.

Posted by William Butler at 5:53 PM

I see that you drove "up to Sacramento" . . . where did you drive from?

I used to live in Monterey so I'm wondering if you ever play down there.

I live in Patterson, just off of I5. I did go to a game in Monterey many years ago, but haven't been down that way for a while. I usually go to the South Bay Game Club in Saratoga.
Regards,
Bill

Very good blog post. I always mention that one of the most important reasons for first aid is to preserve Life.