On July 6th we re-fought the first day of the Battle of Gettysburg using From Manassas to Appomattox..    Bob Bergman, Alan Sissenwen, and Kent were the confederate commanders.   Dan Rygasewicz, John Riley, and Kirk Bollinger were the union commanders.  The composition of the armies was as follows:

The game scale was one inch = 100 yards, infantry =500, cavalry = 300, and artillery = 12 guns.  Ground scale is one inch = 100 yards..  All infantry were regulars armed with rifle muskets.   Buford's cavalry were also regulars armed with beach loading carbines.  Buford had one half of a stand of rifled artillery.  Due to the large size of the confederate divisions they were divided into two parts.  The store opened at 11 and the game started about 11:30 finishing at 4:30 with a 1/2 hour lunch break.

Units arrived at their historical times and locations.    The battle started on the 8:30am turn as the Union I Corps started arriving on the Emmitsburg road. 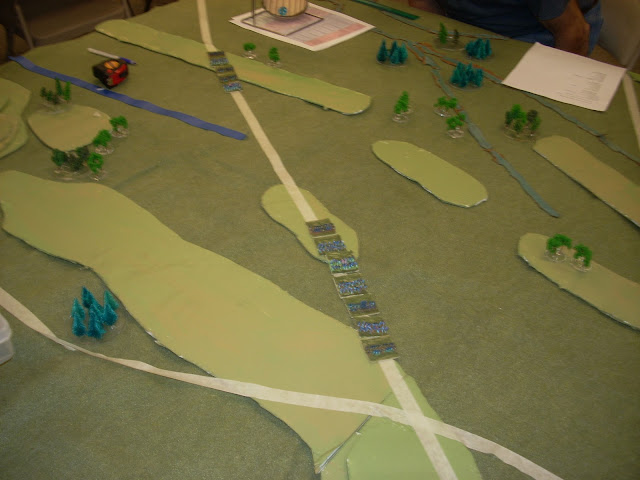 The first part of Heth's division arrived at 10:00am, took an hour to get into position and then attacked Buford.  The attack failed to dislodge Buford, but on the next turn his cavalry failed its morale test and became shaken.   John elected to withdraw from Seminary Ridge and fell back towards Gettysburg as more Confederate infantry was arriving. 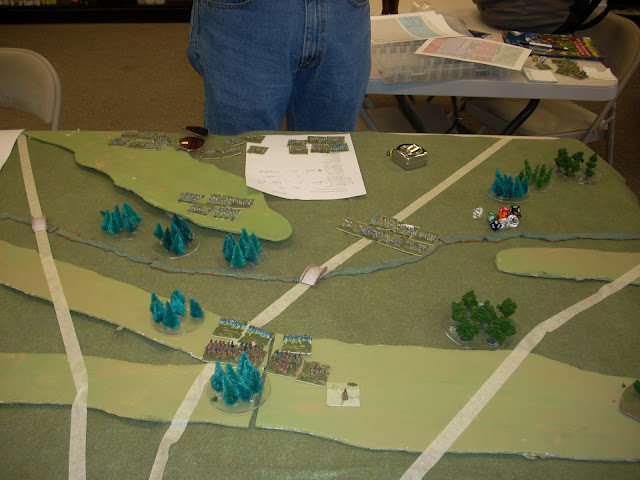 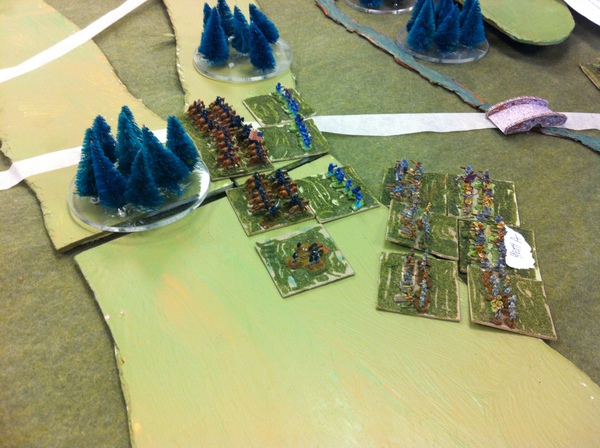 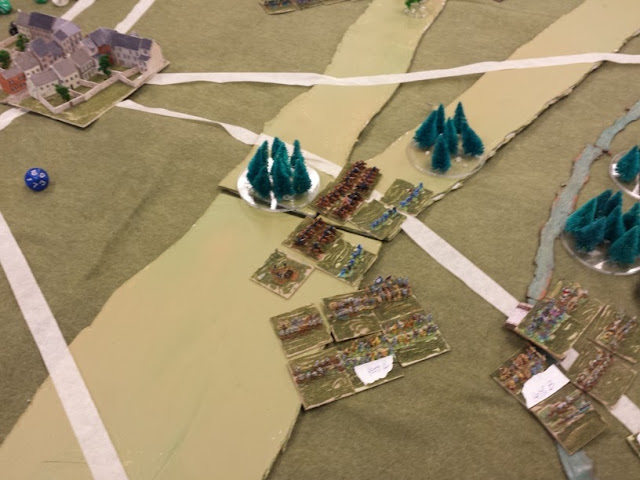 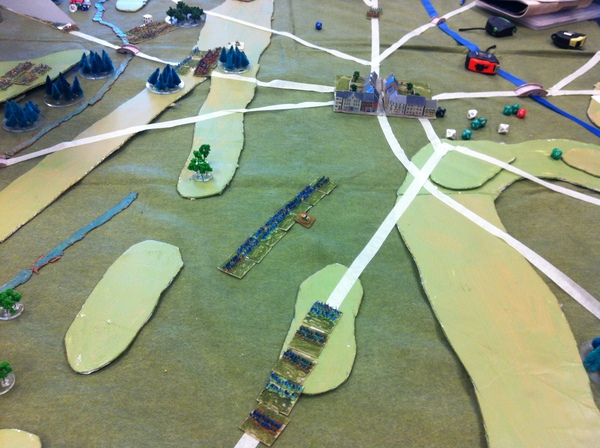 Reynods leads part of I Corps towards the south edge of Seminary ridge in an attempt to outflank Heth. 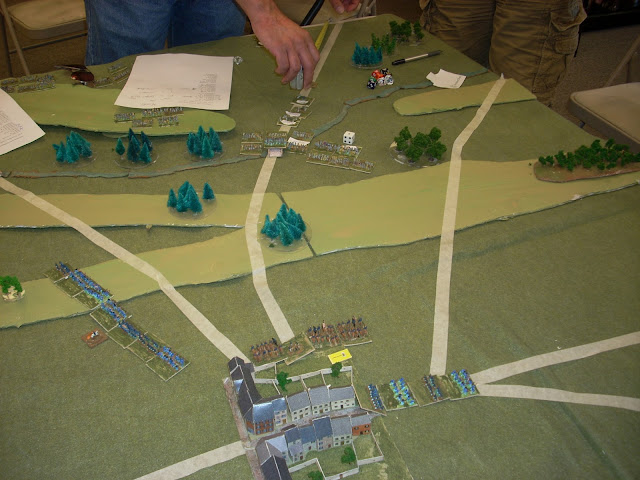 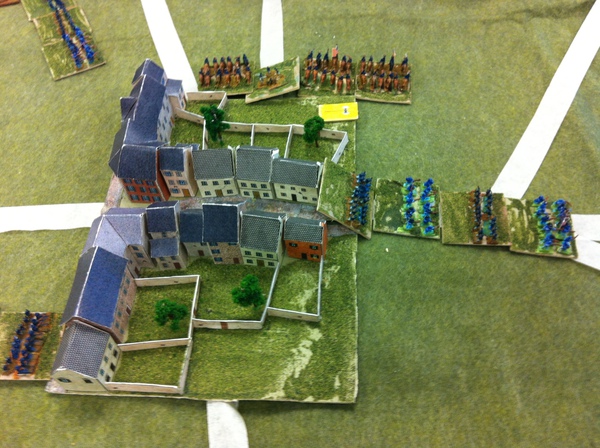 Union cavalry rallies at Gettysburg. as part of I Corps marches through the town.

Buford's cavalry took a voluntary morale test in attempt to recover from shaken status and did so in spectacular fashion by rolling a one.   As the only modifier was the shaken status their morale was so good that they sought revenge for being driven from Seminary ridge and launched a charge on the Confederate infantry on top of the ridge.   As the cavalry came charging up the hill the Rebs let loose with a volley at close range, unseating a good number of union horsemen, causing their charge to falter before making contact.   The cavalry then withdrew again and headed for the east side of Gettysburg.

With Seminary Ridge firmly in Confederate control the Union army withdrew to Cemetary Ridge where it started to entrench. 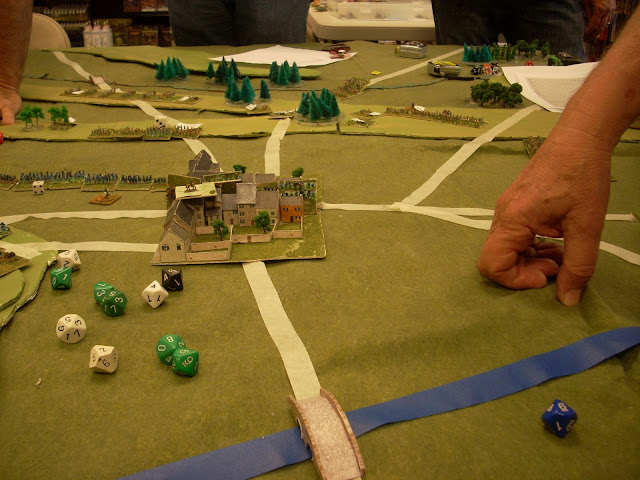 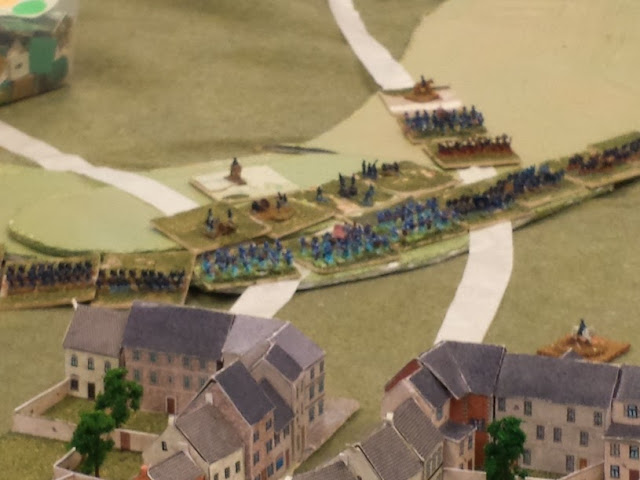 At noon Rhodes' Division arrived north of Gettysburg and proceeded to advance towards the town. 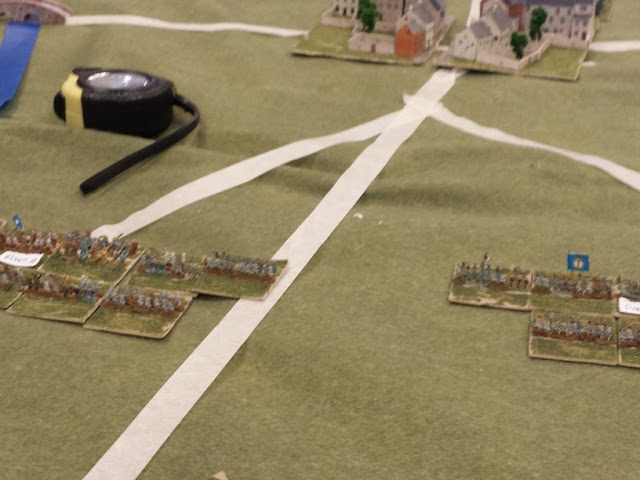 By 1:00 his division was in position to assault the union forces on the hill.   However, the confederate assault was halted by fire from the union forces position there and forced to fall back.   For the rest of the afternoon Heth's Corp held its positions along Seminary Ridge and exchanged artillery fire with the Union forces across from them serving as a pinning force to keep them in place while Rhodes and Early would make several assaults on the Union lines.   The fighting was intense and bloody as Bob's confederates and Kirks yankees fought for control of the hills.  Both put up a valiant fight as their forces made one charge after another in a desperate struggle. 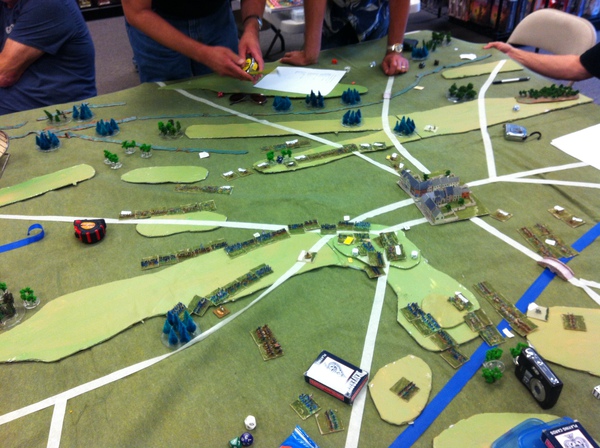 The battle for the hills

Fearing a confederate breakthrough on their right flank Dan brought his division with the Iron Brigade over to regain control of the hill.   Their attack shattered two of the Confederate formations, but they were taken in the flank by a third and most were captured.  Seeing the division being withdrawn from the Union left flank Alan led Pender's division in an attack on the Union entrenchments, but was not able to break the Union line.   As the battle hung in balance the Union III Corps was arriving on the Baltimore Turnpike.   Before they could  get into position to regain control of the hills, the morale of the remaining Union troops on the hills collapsed as they saw two fresh Confederate division advancing through the town.   At 7:00pm the Union army was either routing or withdrawing leaving the battlefield in Confederate hands. 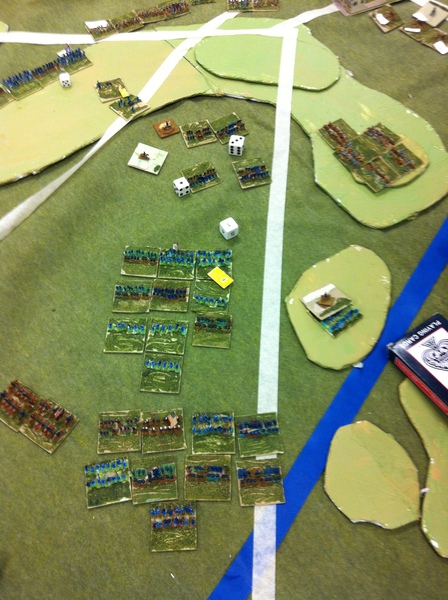 Union III Corps arrives in time to be caught in the general rout.

Historically Ewell's corps halted north of Gettysburg and did not attack the hills.   By pressing forward Bob was able to secure victory for the confederates.    Doing this is the best chance the Confederates have of achieving victory.

I would like to thank all who participated.   A special thanks to Kirk and Bob for taking pictures as the batteries in my camera went dead partway into the game.    Three of the above pictures are from Bob (pictures 4, 9, and 10) and five are from Kirk (pictures 3, 5, 8, 11, and 12).

Posted by William Butler at 9:52 PM