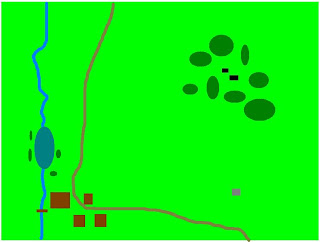 Ray has asked that I put on a game for the club on Halloween day. This will be a follow on from a previous game that I did for the club. The battle will be set in Robert E. Howard's Hyboria and be an expedition by Iranistan into Drujistan in retaliation for previous raids against Iranistan villages.

The previous games' battle field was as follows: a road from the north edge going through the village and heading off on the eastern part of the south edge. A large woods with some ruins in the northeast part of the table. A stream flowing from the north to the south about 1/4 to 1/3 of the way in from the west edge. A tower in the southeast part of the table. A bridge crossing the stream near the mill. A lake/marshy area with some trees north of the mill caused by a dam north of the mill.  There were ruins in the middle of the wooded area.

I ran this game twice. Once at a club meeting and once at a friends house. The raiders entered from the north with the objective of burning the village. The local defense force was outnumbered, but a relief force was due to arrive along the south road and aid them. The tower was inhabited by a wizard. The raiders in one battle were all orcs while in the other they were orcs with elf allies. The village defenders were humans and the relief forces were dwarfs in the game with the elves and knights in the other. In one raid the attackers were able to burn half the village while in the other they did not burn any of the buildings.

In the battle with only the orcs they also attacked the ruins and activated an ancient curse. For several turns they were harassed by two groups of skeletons. The skeletons wandered around based on the direction of the arrow on the die that was thrown for their movement and would attack whomever they came in contact with. Four sides of the die were arrows and the other two had "hit". If "hit" was rolled the skeletons crumbled to dust. In the same battle one group of orcs also attempted to move through the marsh and was attacked by giant spiders.

The wizard in the tower aided the villagers. The attackers also had magic users. The rules used 10-sided die for combat, morale, missile fire, and magic. Low rolls were needed for morale and high rolls were needed for missile fire and combat. For magic two dice were rolled and the difference between the numbers rolled on the dice would be the number of hits caused on the target. Doubles would cause that number of hits on the magic user attempting to cast the spell. To avoid death the wizard would have to roll one die and score higher than the number rolled for the double. In one battle the first attack that the wizard attempted resulted in a roll of double 10's! This caused the disappearance of the top of the tower in a mighty blast and a small mushroom cloud.
Posted by William Butler at 7:45 PM

Now that's what I call magical backlash!
I guess the village was counted as "burnt" ... did any of the orcs escape?
LOL