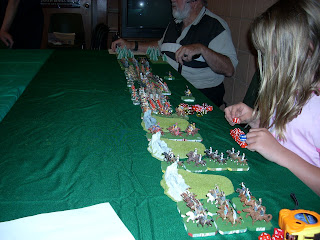 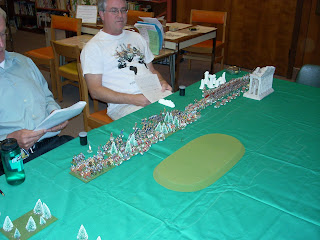 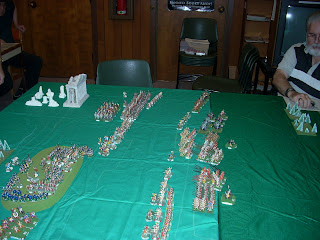 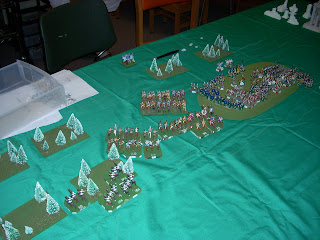 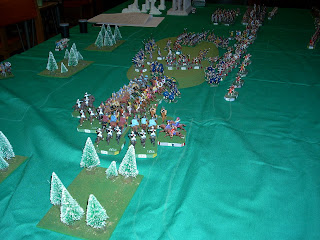 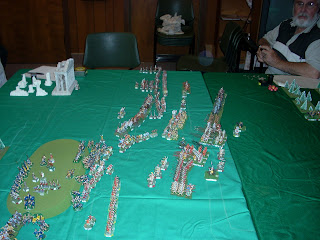 Action on Ken and Hal's (Herodotos)flank. 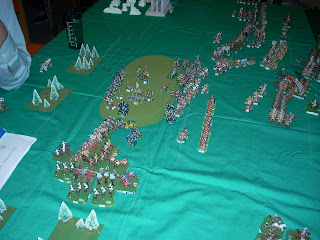 Action in center and Roman right.

Although outnumbered and outflanked, the Roman cavalry refused to die. 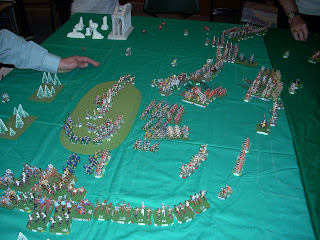 Ken turning Hal's flank. Ken also spotted an item in the rules that infantry could not charge cavalry. Having eliminated most of Hal's missile troops he would then proceeded to move his cavalry in front of the Greek phalanx in order to prevent it from attacking his infantry. 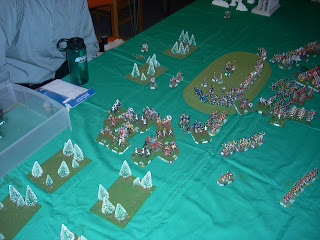 Fighting continues against Roman right flank cavalry. Infantry could join an ongoing melee, so Gary moved some cohorts into the ongoing fight. 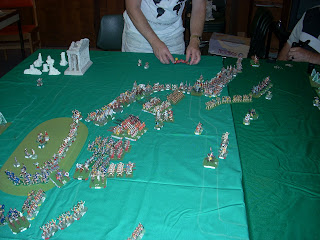 The phalanx was able to advance and force the cavalry back, but Hal didn't have enough troops to hold the flank 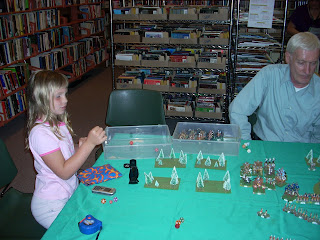 Cleaning up. Gary and my daughter. 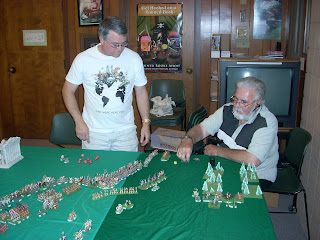 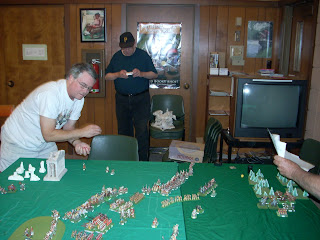 Ray in the background preparing to take a photograph.


Our club fought a game in August. The pictures were taken by me and the following battle report was written by Ray.
Report for Battle of the Temple of Poseidon 87 BC

HERODOTOS of "The Windy Dells" Strategos for Macedon and Commander-in-Chief, He also personally commanded the Allied Army's Right Wing which was all Macedonian. This person at one time was a Macedonian Marine. For most of his later life he was an Engineer. After retirement as an engineer, he became a Flower Merchant in Aigai before being called up to active duty as a Militia General during the Mithradatic War.

BUCEPHALOS of "The Boeotian Butlers" Strategos for Allied Greek City States of Boeotia He was Commander of the all Greek Allied Left Wing which really included a center "hinge unit." This person came from a long line of butlers. Before being called up to active duty as a Militia General he was employed in a supervisory capacity in the Boeotian Countryside by the Theban Postal Service. He was fond of telling Postal Patrons: "Neither snow, nor rain, nor heat, nor gloom of night stays these competent carriers from the swift completion of their appointed rounds."

Praetor GAIUS LIVIUS ZOSIMUS, Commander-in-Chief and also had personal charge over the Roman Right Wing (Legio V + infantry auxiliaries and heavy cavalry). A long time resident of Ostia and a Member of The Patrician Class. This person was a long service Civil Servant before becoming a Praetor (Cursus Honorum).

Legatus CNAEUS RUFIUS MACRINUS, Left Wing Commander (Legio IV + infantry auxiliaries and heavy cavalry). Member of the Equestrian Order (Thus Title "Esquire"). He originally came from Tuscany, but currently resides in a Villa in Umbria. This person had a varied career: He started as an agens societas benevolens (insurance agent), later he became a praeceptor musica ( music teacher), and just before the Mithridatic War an advocatus et iuris consulti (advocate/ attorney/barrister/lawyer). The Roman Senate appointed him as a Legatus under Praetor Gaius Livius for the Mithridatic War.

This WGS wargame was a hypothetical scenario taking place in Northwestern Greece close to the small City State of Astakos. A combined Army of Macedonians and Boeotian Greek City States tried to stop Roman reinforcements to General Sulla who had just begun a siege of Athens and its Port of Piraeus.

The First Mithridatic War (89–85 BC) was a conflict fought between the Kingdom of Pontus and revolting Greek cities—Athens being the most prominent—led by Mithridates VI of Pontus against the Roman Republic and the Kingdom of Bithynia. The war lasted five years and ended in a Roman victory which forced Mithridates to abandon all his conquests and return to Pontus.

Setting up the Wargame

The Atwater Library did not open until 9:35 AM. Set up of the wargame tables and moving furniture around took over fifteen minutes. Sorting Hal Windell's miniatures into two armies took over forty five minutes.

The Greeks were left with an area of open ground on both of their flanks as well as a large stretch in their center. They had small patches of light woods in both their left center and their right center.

Game Turn One began at 10:35 AM. This was twenty-five minutes of just movement.

Game Turn Two began at 11:00 AM. This was twenty-two minutes of just movement.

The Game ended at 3:35 PM. Counting unit strengths and casualties took about ten minutes. Clean up took up about fifteen minutes. We were out of the Atwater Library by 4:00 PM--one hour ahead of the maximum time (5PM) allotted for the game.

Harold (Hal) C. Windell's own rules, The Ancient World, were created by him over forty-two years ago. As far as I can tell from my memory and existing copies, these rules have gone through four editions. Originally, The Ancient World, was a Simultaneous Move game of sorts with the winner of a die roll (on every game turn) deciding on which flank he would begin while his opponent moved on the opposite flank. This system was modified quite often by an umpire (normally Hal himself) to the more common Move & Counter Move. The Fourth Edition of The Ancient World (02 May 1989) uses a pack or packs of playing cards to determine moves i.e. the Umpire draws a Red Card and Romans move a particular unit, and so on. This was the system used at The Battle of The Temple of Poseidon. As Scenario Umpire, I drew the cards. ( I also did not shuffle them very well.)

Game Description
Ken's e-mail of 08/12/09 (which was sent to all of you) described the Battle of the Temple of Poseidon in a "fair and balanced manner" (like FOX News?); so there is no need for me to say more. The Sixth Turn was the decisive one because over a third of the Allied Right Wing (All Macedonian) disappeared. Four units of Macedonian Heavy Cavalry survived and these would have been able to join the rest of their Right Wing (all Light Infantry) which was "refused" ( bent back). Nevertheless, Ken's destruction of all the Macedonian Light Cavalry, and most of the Macedonian Heavy Cavalry, in effect "turned" that wing. In spite of this, the Allied Army would have been able to retreat without difficulty, especially because the "off board" ILLYRIANS (fresh, organized and tough) would certainly have helped cover the retreat.

The late Elliott Derman (WGS Founder & Director) was fond of saying that, "Wargaming is not a spectator sport." I respectfully disagreed with him then and still do now: There are exceptions to this observation, and the Ancients Miniature Wargame fought on 08 August 2009 is one of them. I very much enjoyed being Scenario Umpire for The Battle at the Temple of Poseidon.