Dave Howard and I got together for a game at the MWS meeting on February 16.   The armies were Pyrrhus and Republican Rome.  Keith also participated on my side commanding the left flank.  While Rolf and Frank assisted Dave.     The armies totaled 420 points each.   The Romans had a full consular army of two Roman legions and two Latin Ala totaling 16,800 infantry and 2400 cavalry.   Pyrrhus had 2400 cavalry, 12 Elephants, 14000 Greek and Macedonian phalangites, 4000 Tarantine Phalangites and 1500 mercenaries.

I planned an echelon attack leading with my right flank and having Keith hold back the left flank.   The Romans spread out on the wings of the battle.   Keith was presented with the opportunity of attacking the two Roman cavalry units on his flank with all three of his cavalry units and charged into them.   Unfortunately his die rolls were not effective.   The Romans were able to bring up infantry units to envelop his cavalry and eventually destroy them along with capturing the general commanding them.   This left our left flank in a dangerous position with the Romans having enough troops available to overwhelm it.

On the right flank I was initially successful breaking some of the velites and cavalry opposing me.   However, Pyrrhus and a couple of other cavalry units became embroiled in a fight with several Roman cavalry units.   Eventually both my cavalry and Dave's would be destroyed, but Pyrrhus managed to extricate himself.   One of the elephant units broke and rampaged into my right flank phalanx unit causing little damage before eventually succumbing to wounds.

In the center the legions and the phalanx units were engaged in combat all along the front.  As Roman units became exhausted they were replaced by units from the second and eventually the third line.   The phalanx units were also being worn down.   One of the Tarantine units had become shaken and might have broken in another round or two of combat.   Having broken some of the velites on the Roman left I had a cavalry unit in position to threaten the flank of the Roman center.   the Romans countered by shifting some Triarii to counter this.  Because the Romans had spread their army out they had stripped some of the Triarii from back rank this left them without enough replacement units for the combat in the center.  At this point we called the game.  During the next round of combat several Roman units would have been destroyed and would have likely caused most of the remaining infantry in the center to flee.

The cavalry on both of our flanks had suffered severe casualties, but with the Roman center broken we would have been able to counter any flanking moves by the remaining Romans.  Roman losses were about 5000 or so as we did not have enough cavalry to pursue the 10,000 routers.   Our losses were about 1800 cavalry and several hundred infantry.   A Pyrrhic victory. 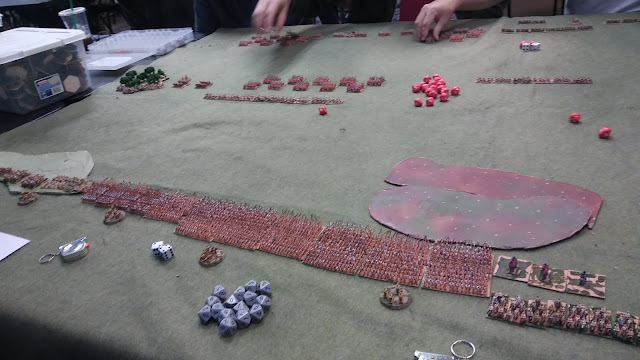 Beginning of game Romans on the far side are advancing. 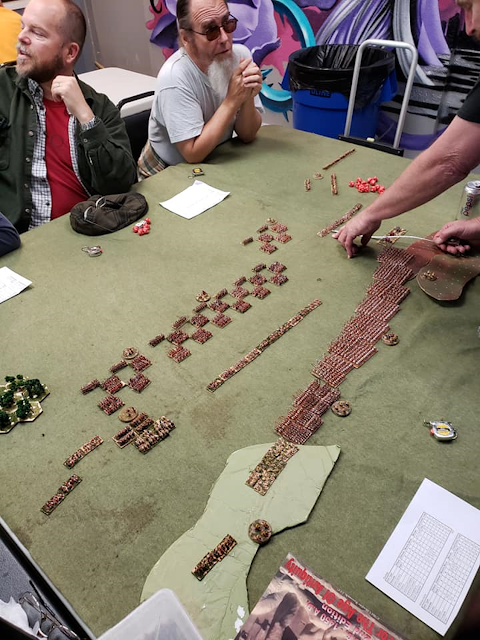 Our opening move.  On the following turn the phalanx units would move towards the left to more directly confront the Romans.  My right flank cavalry and elephants were heading towards the gap between the legions and the Roman left flank cavalry.  Dave on the right and Rolf on the left. (Photo by Mike O'Brien)
Posted by William Butler at 6:49 PM