Battle of Arracourt 1944 at the Fresno Game Club

On February 1st the Fresno Game Club had their monthly game.   The rules used were Rapid Fire.   I commanded the American forces with Neal and James as sub-ordinate commanders.   Dave, Brent, and Jeff commanded the Germans.

My plan was to have the two armored infantry companies in forward positions to delay the German advance.  One company occupied the woods on the north side of the table while the other and the battalion units occupied the southeast village.  Neal deployed in depth further back at the other villages.   I put our Fire Direction Center and the on table artillery at the west end of the table behind the ridge.   I had three forward observers.  Two were placed with James' infantry companies and the third occupied the woods at the center of the table.   I also commanded the re-enforcing engineer and tank companies.

Visibility for the first five turns was limited to 12 inches due to morning ground mist.   The Americans had first fire when units came within spotting distance in the mist.

The Germans arrived in two columns.  One on the northern road and the other near the southeast village.  I directed three of our eight guns on the German forces that had advanced to the top of the hill just south of the southeast village on the first turn.   On the second the other five guns came down on the northern column.   The observers headed towards the rear after calling the fire in order to protect them from being overrun by the advancing Germans.   By turn five they had reached positions on the eastern half of the table.  The artillery continued to fall on the original target areas causing sporadic losses for the Germans and slowing their advance.   James' infantry in the southeast village was eventually overrun, but not before causing more casualties for the Germans than he received.

My observers lifted their fire and proceeded to re-direct it.  On turn seven all eight batteries fell on the leading formations of the northern German advance taking out a Panther  and forced the lead elements to fall back.

James' company in the northern woods was being assaulted by tanks, and multiple infantry units, but was holding on and inflicting more casualties than he was receiving.   As the mist lifted the southern German force could be seen advancing across the open ground towards Neal's forward positions.  Their fire caused several losses including Neal's headquarters element, but did take some damage.   On turn seven the engineers arrived and occupied the southwest village.  The tanks would be arriving on the next turn.

At this point the game was called due to time.   The Americans were declared the victors for preventing the Germans from advancing far enough to achieve their victory conditions.

While Rapid Fire is not too complex and fairly easy to learn the mechanics of the rules do not match the level of play the game is supposed to represent.  Each tank is supposed to be a platoon and infantry is organized as multiple figure companies.  When played with 15/20mm figures towns are represented by two to three buildings.   This would be okay, except that instead of being treated as representations of an area occupied by multiple buildings as it would be at the scale of the game, each building is a single building.   This prevents bazooka teams from firing from within the buildings per the rules.   As such the game plays like it is a lower level skirmish game with individual infantry, vehicles, and buildings.  Artillery fire also deviates more than it did historically and is less accurate.   The rules do take into account the American use of fire direction centers to direct artillery barrages and the ability of American forward observers to call multiple battalions of raillery on a single target. 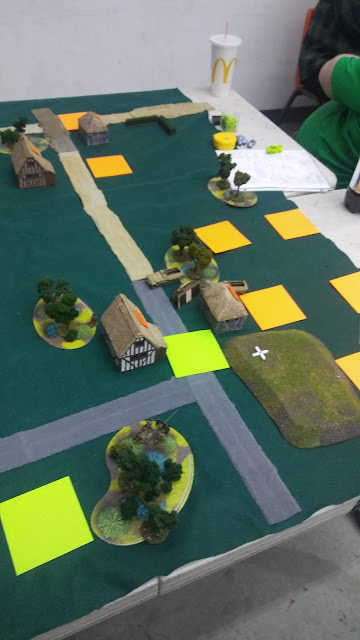 Beginning of the game cards represent real and dummy unseen units. The Germans are arriving from their start edge represented by the yellow cards.  American are the chartreuse cards. 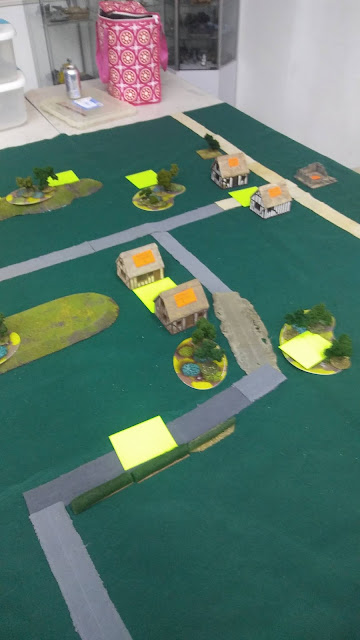 Rear area of the American deployment 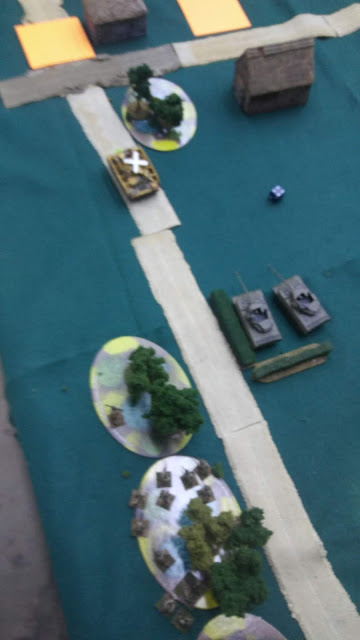 Hellcats ambush lead German unit on the northern road.   The white X marker is the aiming point of the American artillery barrage 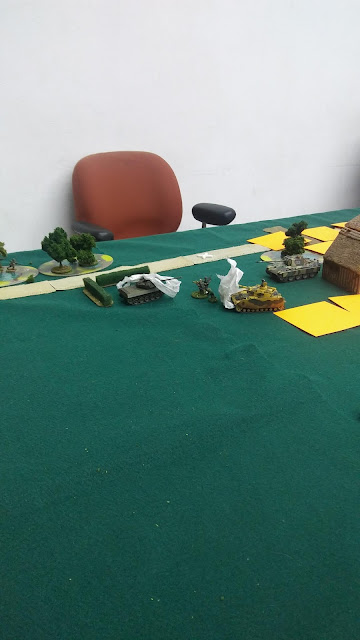 Destroyed vehicles on the north edge.  By the end of the game the Germans would only advance slightly west of the hedge rows where the Hellcats are located.  The woods at the edge were still being contested by American infantry. 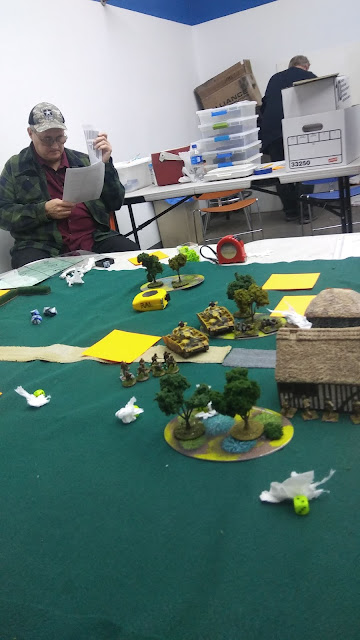 Gamemaster Ron in background.  Germans are slowly clearing the village in the southeast.   It took them more than four turns to do so.  White cotton puffs mark smoke rounds from German mortars.
Posted by William Butler at 4:16 PM