Finished painting and basing the French line cavalry yesterday.   I ended up with more than I had originally intended to.   While I was doing the Germans I realized that I had forgotten to include the army reserve artillery.  I also found a few more figures in my collection that I had previously missed.  Fortunately I came across an Ebay listing for 13 packs of French infantry, cavalry and artillery and was able to win them at the minimum bid price.  This, with shipping, was still less than purchasing the additional infantry and guns that I needed.  The additional cavalry also allowed me to put six figures on each cavalry base instead of the five that I would have had to do previously.  I still ended up with eight more units of cavalry than I had planned.

The entire French army now consists of the Guard Corps and ten infantry divisions in three line corps.   There is a cavalry division in each of the corps and enough for the three reserve cavalry divisions.  The purchase also allowed me to replace the ACW Zouaves that I was using for the guard Zouaves.

The picture below has the cuirassiers, chasseurs and hussars in the left column from front to back and the dragoons and lancers in the right column.  In 1868 new uniform regulations were issued for the line cavalry.   The dragoons would keep their helmets, but would be changing their green tunic for a dark blue one.   The lancers, hussars, and chasseurs would all exchange their head gear for red kepis.   The Hussars and chasseurs would exchange their traditional uniforms for a blue tunic that was lighter than the dragoons and cuirassiers.   This change was only partially implemented by 1870.   Le Armee de Napoleon III shows all kinds of combinations of uniform pieces in the various cavalry regiments.  Hussar regiments are shown in their traditional uniform colors with both the red kepi and their original head wear.   I decided to paint the chasseurs and dragoons in a mix of units that have some in their new uniforms and some in their old uniforms.   One regiment of lancers has the red kepi.  The figures are actually Rush's lancers from the ACW range that I had spares of.

This only leaves limbers, wagons, and generals to finish painting and flags to add to the units. 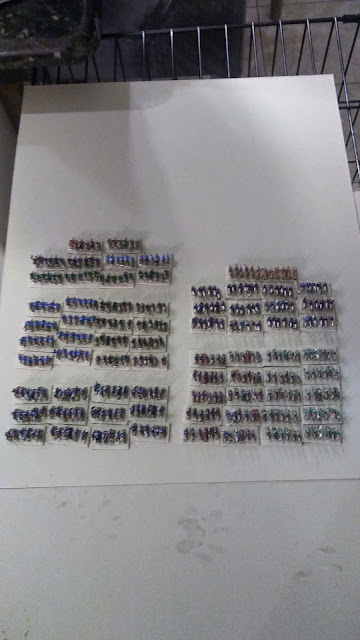 Posted by William Butler at 7:28 PM