The Weekend of March 22-24 was the Conquest Sacramento convention.   There were two games of Fistful of Lead:  Galactic Heroes on Saturday.   The first was the smuggler scenario from the rule book.

The rival groups were all taken from the compendium supplement.   The smugglers were the Kreng who had to deliver the contraband to the Ornks.   The Rebels were out to intercept it for their own use and the local law enforcement, Imperial Storm troopers, were out to stop everyone.  The game was played on a 4x6 foot table.

almost as soon as they got outside the port facilities the Kreng became engaged in a firefight with the rebels.   One of the Kreng climbed to the top of the second story of a space port building to get better shots at the rebels.   As the Kreng werr getting the better of the firefight, one rebel climbed to the top of the first story of the port building.   Seeing this the Kreng warrior on the second floor jumped down on him and proceeded to slice and dice the unfortunate rebel.

Meanwhile the police had advanced along the south edge of the town heading towards the spaceport and the Ornks were moving towards the center of town.   The two groups also became engaged in a long range firefight, but with little effect.   About this point the person who had signed up for the game finally arrived and took over from my friend who had volunteered to take his place until he arrived.   From this point the police became very passive hiding behind the buildings and trees in the south part of the town.

While some of the Ornks were trading shots with the police, the others were headed towards the town plaza to try and make contact with the Kreng.   The came across a couple of the rebels and engaged them with one of the Ornks killing both.   At this point the two wounded rebels who were still alive decided to retreat after loss of their leader and his second in command.

With the rebels retreating and the police in hiding, the Kreng were able to make contact with the Ornks next to the tavern and turn over the contraband. 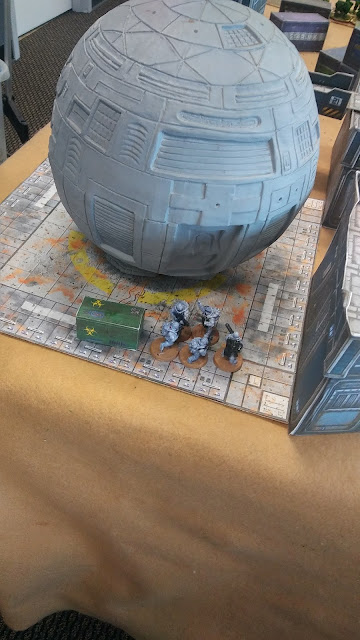 The East Moss Landing spaceport.  the Kreng have just left their ship with the green box of contraband that they were paid to deliver to the Ornks. 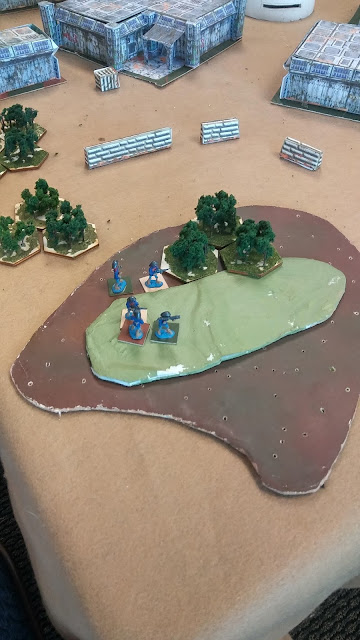 The local law enforcement arrives in the southeast corner. 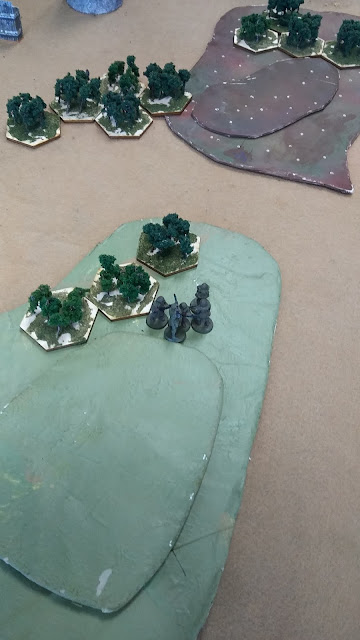 The Ornks starting from the northeast corner. 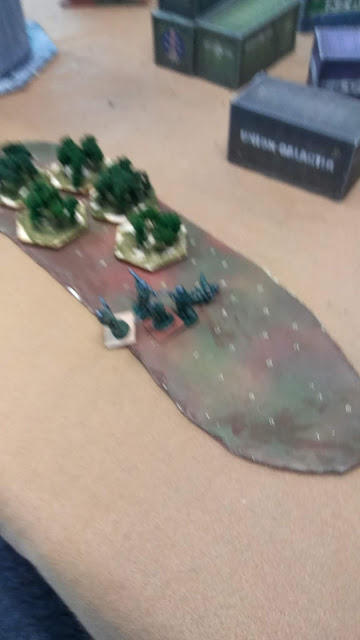 The rebels in the northwest corner by the container yard. 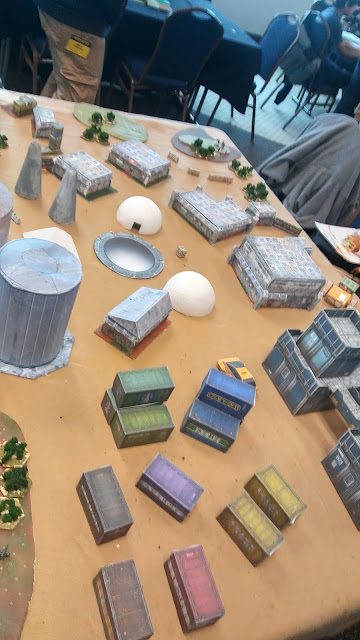 The port of East Moss Landing viewed from the west. 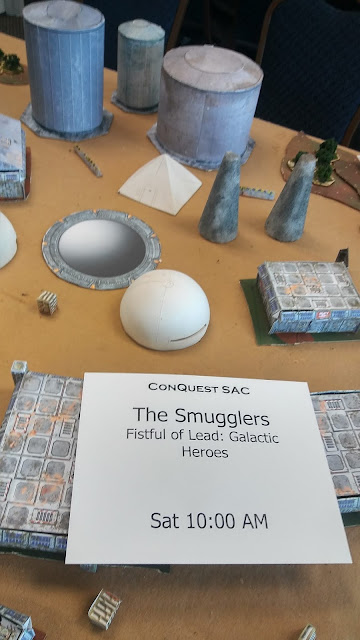 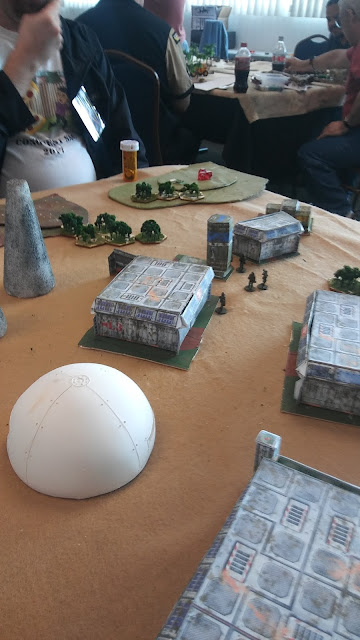 The Ornks move into town. 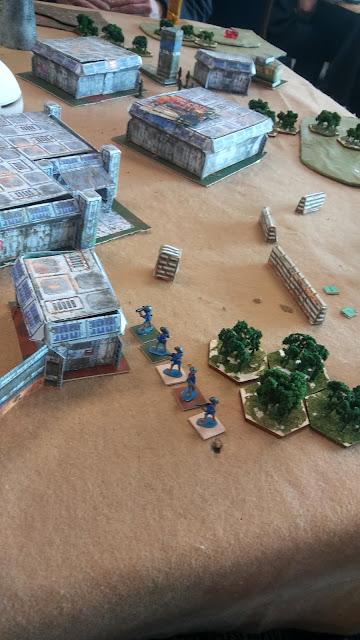 The police advance in line abreast 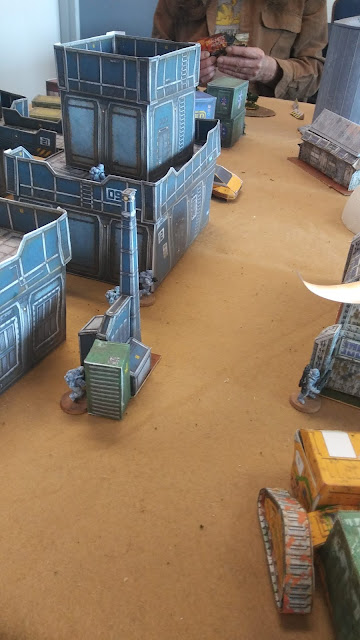 Firefight between the Kreng and rebels.   One Kreng has climbed to the top of the first floor 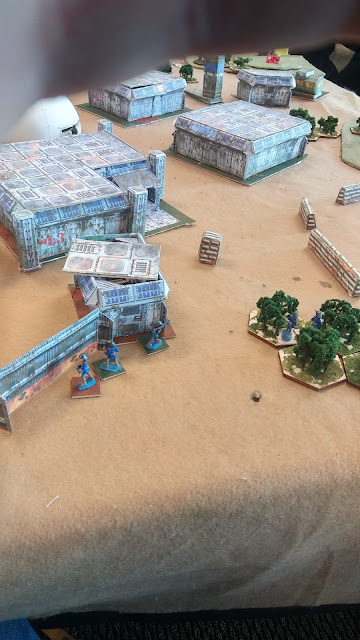 The police take cover as they trade shots with the Ornks in the background. 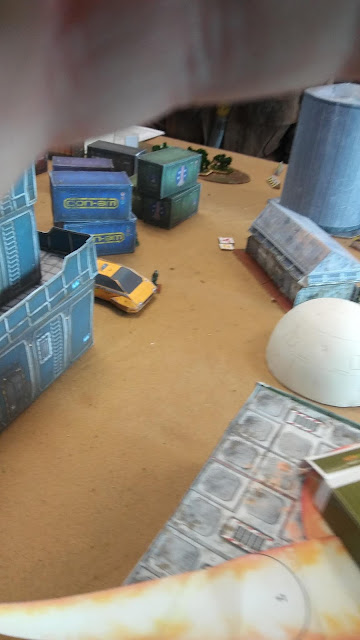 Rebels hiding behind a taxi 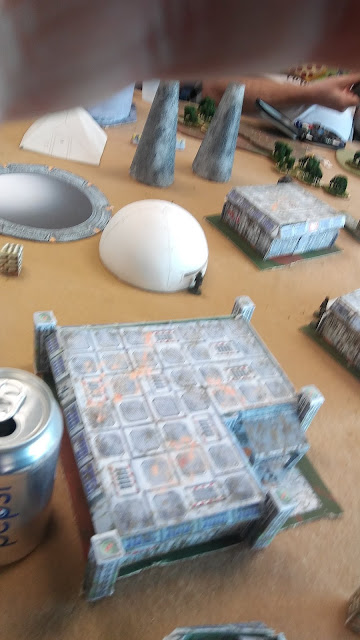 The lead Ornk near the central plaza.  The tavern is in the lower center of the photo with a can of the local beverage next to it😁 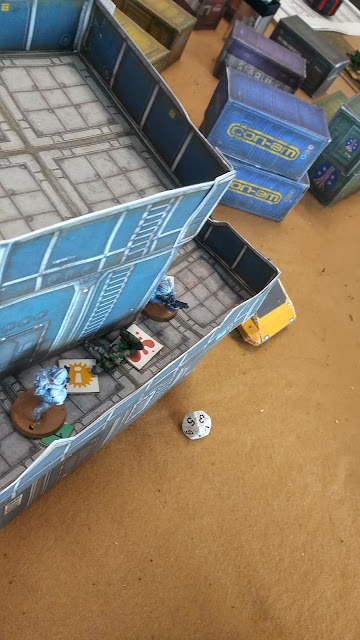 Unfortunate rebel about to be sliced into small bits by the Kreng who jumped down on him. 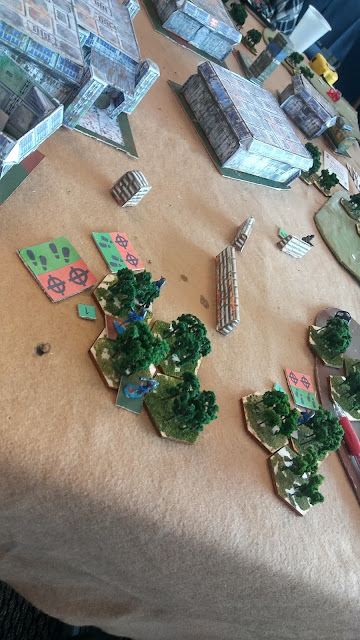 Another view of the police hiding amongst the trees as an Ornk advances to the small wall. 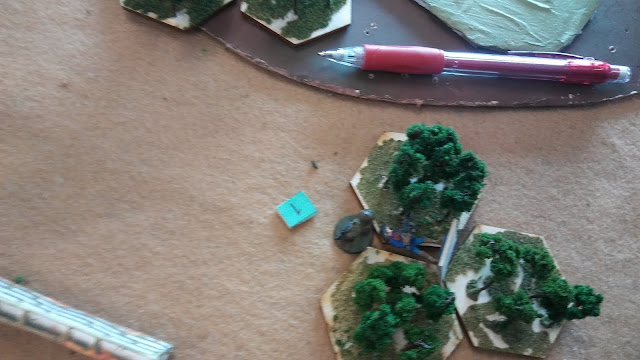 An Ornk rushes one of the police hoping to take him out. 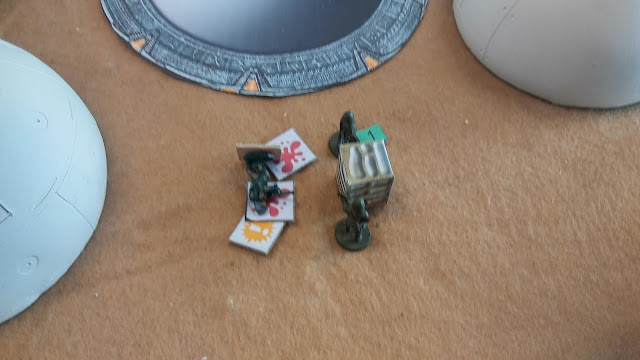 Posted by William Butler at 7:52 PM

great read. love the buildings, not to fancy but does the job.