The game took place at the Miniature Wargaming Society of Sacramento meeting on Sunday October 21st.   The scenario was set in late 1943 on the Eastern Front.   The Russians had broken through the main German line and were advancing towards the west.   The Germans had assembled a kampfgruppe with orders to stop the Russian advance and if possible drive it back.

The Russians objective was to reach the western edge of the battlefield.   The Germans were tasked with halting the advance and if possible to drive the Russians back. 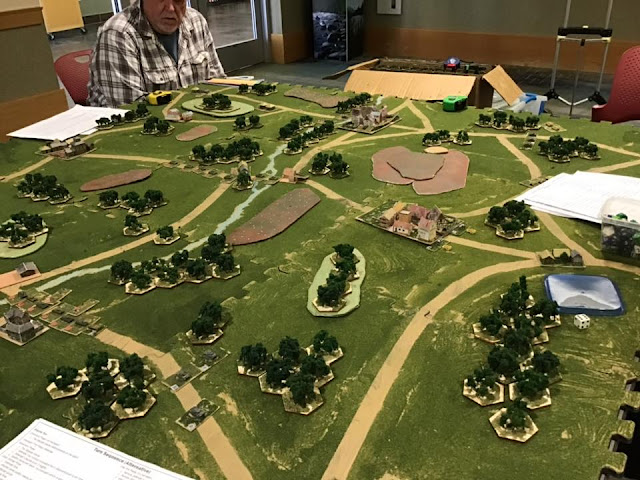 View of the battlefield from the north with Keith in the background.   A Russian T34/76 battalion with some infantry support is advancing on the left edge of the picture towards the PZIV company at the bottom left center.  The German infantry and mortars have occupied the town at center right.  The t34/85 battalion is advancing towards it.   At the top center Keith's T34/76 battalion and the infantry have occupied that town and the woods along the stream next to it. 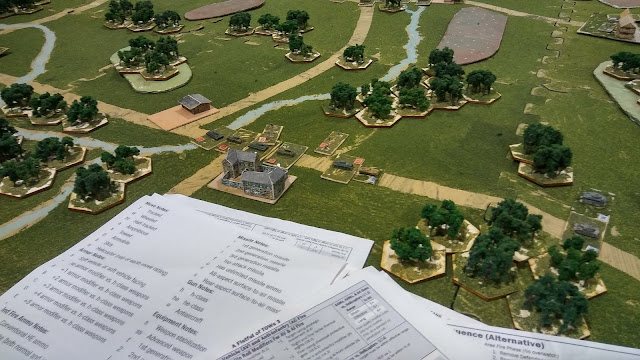 The T34/76 battalion and infantry advance along the northern road.

The first two turns saw both sides advancing towards each other.  The Russians moved first and using strategic movement had almost made it to the center of the battlefield by the first turn.   On the northern flank the PZIV company managed to defeat the opposing Russians with the loss of one platoon.    The southern Russian force dug in and halted their advance at the town.   They took up positions along the wood and town edge which exposed them to fire from the German armor.   This eventually led to their tanks being destroyed or routed by the Tigers and the PZIVs.   One PZIV platoon was driven from the field on that flank.

The Germans reacted by shifting the northern PZIV company to positions along the western road northwest of the center town   At this point the game was called as a draw.   The Russian advance had been halted, but they had punched a hole through the center and almost made it to the western edge.  The Germans had lost their infantry and part of their armor.   Driving the Russian T34/85s out of the central town would be difficult,   The Russian infantry in the northern town would also be difficult to remove if they withdrew from the edges into the interior of the town.


Unfortunately I was so busy as the game master that I forgot to take more pictures.   The top photo is courtesy of Mike O'Brian.