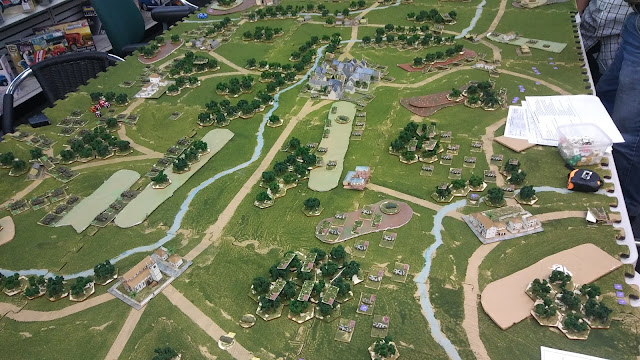 View of the battlefield from the south.   La Cucaracha forces are defending and have deployed in depth.   One motorized battalion is defending the city of Tiempo Padado  in the center of the battlefield another is deployed on the ridge and woods south of it and another is occupying the woods north of it.   Part of another infantry battalion is in the woods and hill further south with a bmp battalion near the woods east of the center ridge.   A tank battalion is just out of picture on the south edge.   The other BMP battalion is off of the north edge of the picture and the last tank battalion is in reserve near the top right of the picture. The Buena Vista mountain brigade advanced on a wide front with its three battalion in line.  One advanced towards the city and the other two were further north.  The Presidential Guard brigade swapped a tank company from each battalion with an infantry company from each of the Puma battalions. attacked in depth on the south side of the field.  The Buena Vista brigades both had three recon platoons, but only one was used on the first turn of the game on the south flank.  It was destroyed almost immediately when it advanced up the road on the south edge.   Recon units get an additional five hundred meters of spotting distance.   Due to cover provided by the towns, woods, and hills most units were not visible unless they were firing or moving and even then vehicles are only spotted at 2000 meters or less if they are in cover. 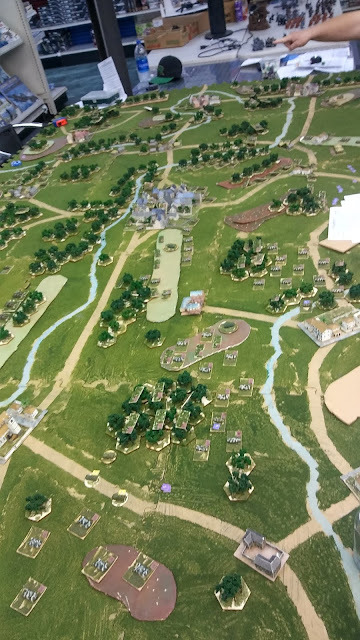 Full view showing the tank battalion on the south end. and the north edge. 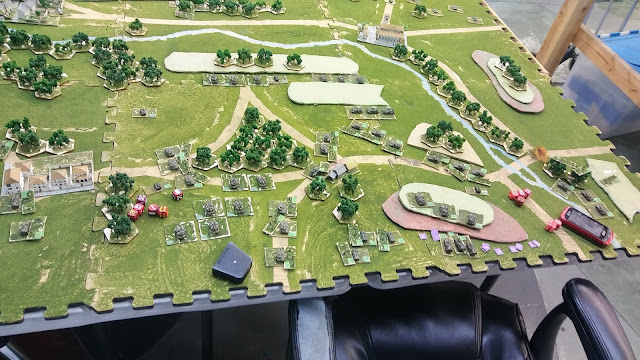 View from behind the south flank of the Buena Vista army 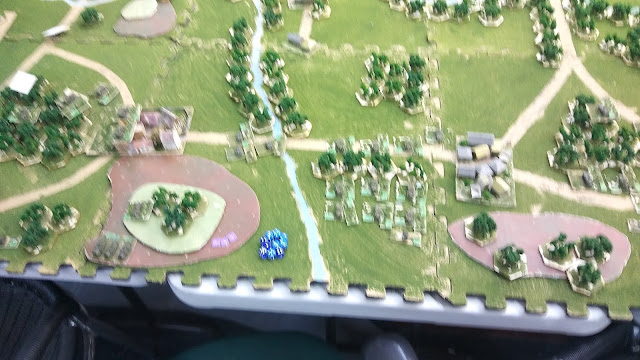 View from behind the north flank of the Buena vista army.   The mountain brigade advanced cautiously initially.   About the fifth turn the left battalion made a dash for the town near the north center of the field taking heavy casualties. 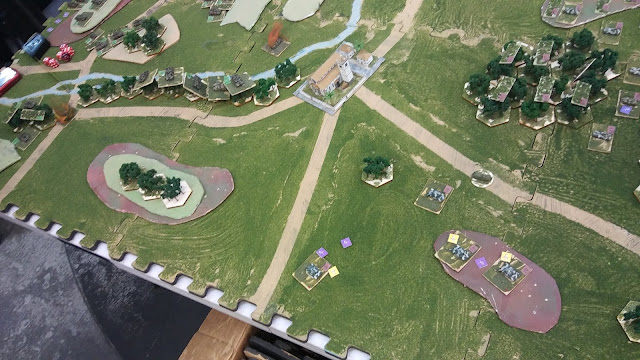 The southern end of the battlefield.   Buena Vista Leopard 3A6 tanks have decimated the La Cucaracha T90 battalion 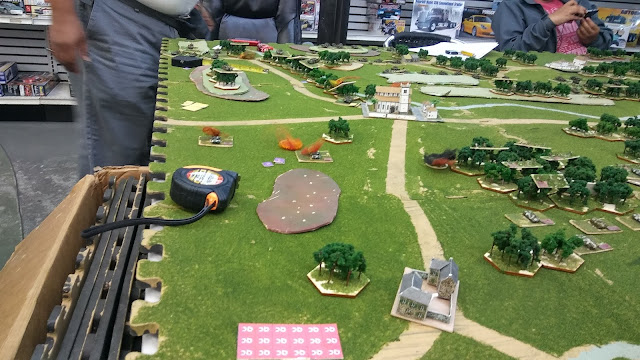 The remaining T90s have been eliminated exposing the left flank of the La Cucaracha defenses.  The Buena Vista divisional artillery brigade and helped damage the defenders with its MRL barrages.   La Cucaracha artillery support had been intermittent throughout the battle due to poor communications (artillery request die rolls) 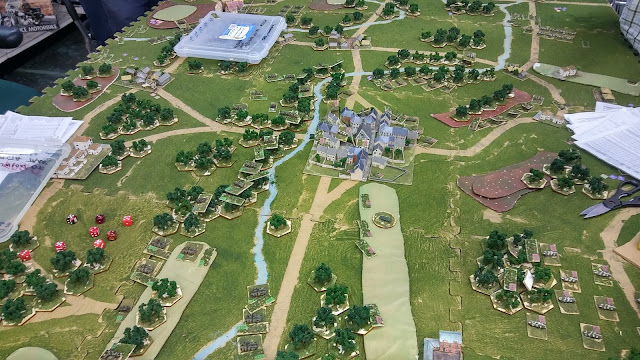 One of the Buena Vista mountain brigade battalions begins to assault the city.   Though taking some casualties from defensive fire, by standing off in the woods and concentrating fire from its infantry and APCs it was able to cause twice as many casualties as it took.

At this point we called the game.  We had started about 11:30 and ended at 4:30 with a 45 minute lunch break.   It was the seventh turn of ten.   We averaged about 30 minutes for each 12 minute game turn.  The game was declared a winning draw for the Buena Vista army.   While one of the mountain brigades battalions was in trouble the La Cucaracha left flank was in danger of being turned.   As long as the Buena Vista army could continue to engage the La Cucaracha infantry frontally and avoid being flanked they were likely to achieve their objective.   They had a four to three advantage in battalions, better quality (good vs average), and their armored vehicles were almost invulnerable to the infantry\s anti-tank missiles from the front.  The right flank motorized brigade would not be able to shift any support in time to the south and by doing so may have left an opening for the Buena Vista mountain brigade to create an opening in the La Cucaracha line.